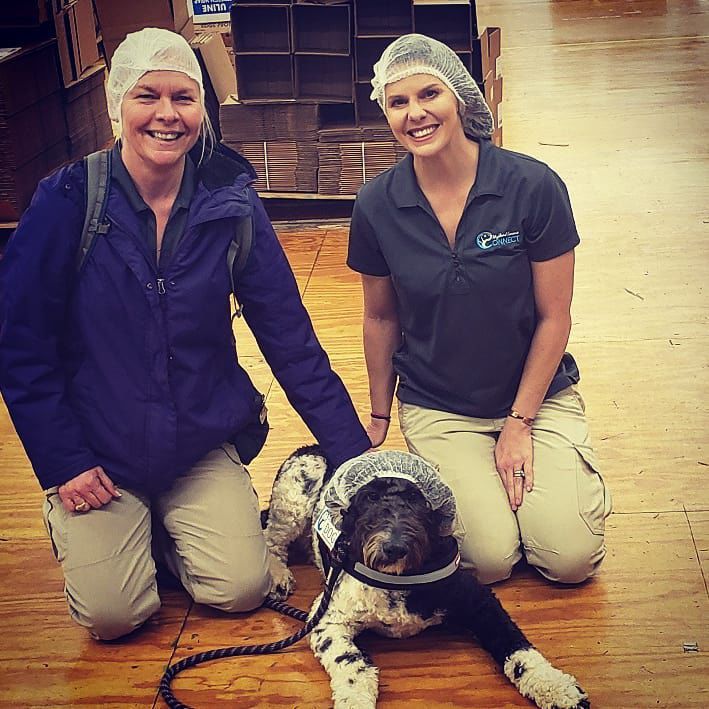 Deb Livingood-McKee and Erin Purgason with Highland Canine Connect are pictured with service-dog-in-training Otis on a tour of Synergy Labs led by Elena Azzarita in January. 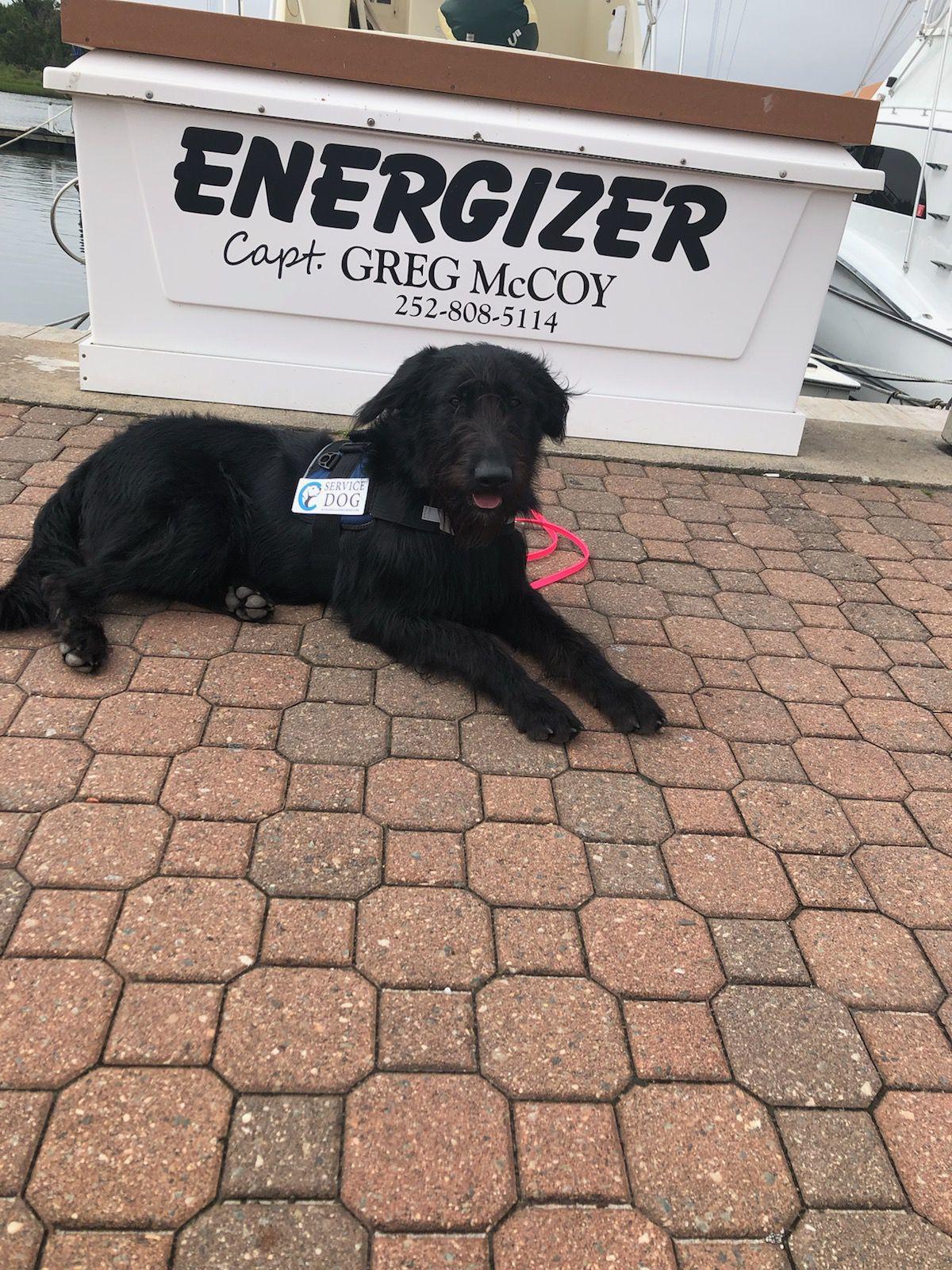 Pictured is Alvin, a Shepadoodle training to be a service dog. 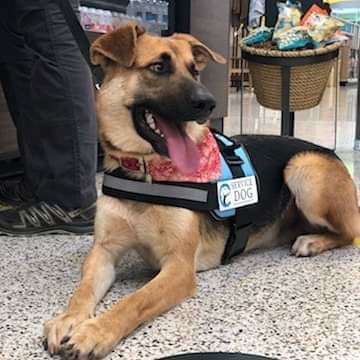 Pictured is Koda Bear, a German Shepherd mix training to be a service dog.

A company with ties to Burke County has made a commitment to support local veterans with a special project.

Synergy Labs, a Florida-based pet product manufacturing company with a facility in Hildebran, has committed to sponsor two dogs to be trained as service dogs and then donated to help two veterans in Burke County, according to Highland Canine Connect, the nonprofit organization that will handle the training.

Highland Canine Connect is based in Iredell County and “works with the community to create fulfilling and engaging connections between dogs and people in need,” according to its website. Erin Purgason, owner of the related business, Highland Canine Training LLC, said they train 3-4 service dogs per year.

“Synergy was networking for any local nonprofits they could work with to provide a service dog for a veteran,” Purgason said. “Highland Canine Connect was mentioned as a possibility, and we were introduced in the fall of 2019. We finalized a plan at the beginning of 2020.”

She said Synergy requested the dogs provided be donated by a reputable breeder or come from a shelter or rescue.

“We were able to find one of each,” Purgason said. “Koda Bear is a 1.5-year-old German Shepherd mix that was located at Henderson County Animal Services by a dog trainer friend in the area. Alvin is about a 1-year-old Shepadoodle (a cross between a German Shepherd and a Standard Poodle) donated to us by Country Poos and Doos of North Carolina.”

She described how the dogs have responded to the training.

“Koda has been working with us about five months now,” Purgason said. “He has come so far. When we first got him, he had never been on a leash. He now performs basic and advanced obedience tasks, such as deep pressure lay and touch, and has been started on tracking. We are concentrating on keeping him out in public, since COVID-19 has limited our public outings and socialization time. His tasks will also be changed or added to once we find his forever handler. We like to really get to know them so we can customize what tasks they will need from a service dog.

“Alvin we received as a puppy. He has been trained to fetch items dropped, open cabinets, turn on lights and walk beside a wheelchair or walker. Again, we will add or change his tasks as well, once we find the perfect handler for him.”

Veterans in Burke County may apply to receive Alvin or Koda Bear as their service dog by visiting highlandcanineconnect.org, clicking on “Service Dog Donation” and filling out an application. The deadline for applications is Aug. 1.

“We have a detailed application process where we learn about their day-to-day life and what they are wanting a service dog for, meaning tasks,” she said. “We explain that having a service dog is a commitment and make sure applicants are ready or prepared for the training and bond process. We also get references for character, as well as the financial aspects of food, vaccines, medicines and other care for the dog.”

Once the veterans are selected, they will be trained by the organization on how to handle their dogs.

“Once we select the handlers, they will come meet the dogs so we can make sure the personalities are a good fit,” Purgason said. “We also deliver the dog to their home and work with the handler and dog one-on-one for three to six days, depending on what’s needed. Also with everyone local, we are available anytime for questions or concerns in regards to training both in and out of the home. We also provide the handler with a take home video of the tasks and commands that they can refer back to at any time.”

She envisions the dogs becoming a vital part of the veterans’ lives.

“I am hoping the dogs will provide them independence, comfort, stability and of course, a partner,” Purgason said.

Both the McDowell and Rutherford courthouses are closed today and next week because of a confirmed case of COVID-19.

McDowell County sheriff’s deputies are looking for a runaway 16-year-old.

Former Old Fort Planning Board member to run for mayor

A former member of the Old Fort Planning Board already plans to run for mayor of the town next year.

Kitsbow CEO testifies to Congress about local response to COVID-19

The chief executive officer of a McDowell County manufacturing company testified Thursday before a U.S. House Subcommittee about how he, his e…

A Marion woman has been charged after leading a deputy on a chase, authorities said Friday

This story has been updated with new hospitalization numbers.

Deb Livingood-McKee and Erin Purgason with Highland Canine Connect are pictured with service-dog-in-training Otis on a tour of Synergy Labs led by Elena Azzarita in January.

Pictured is Alvin, a Shepadoodle training to be a service dog.

Pictured is Koda Bear, a German Shepherd mix training to be a service dog.