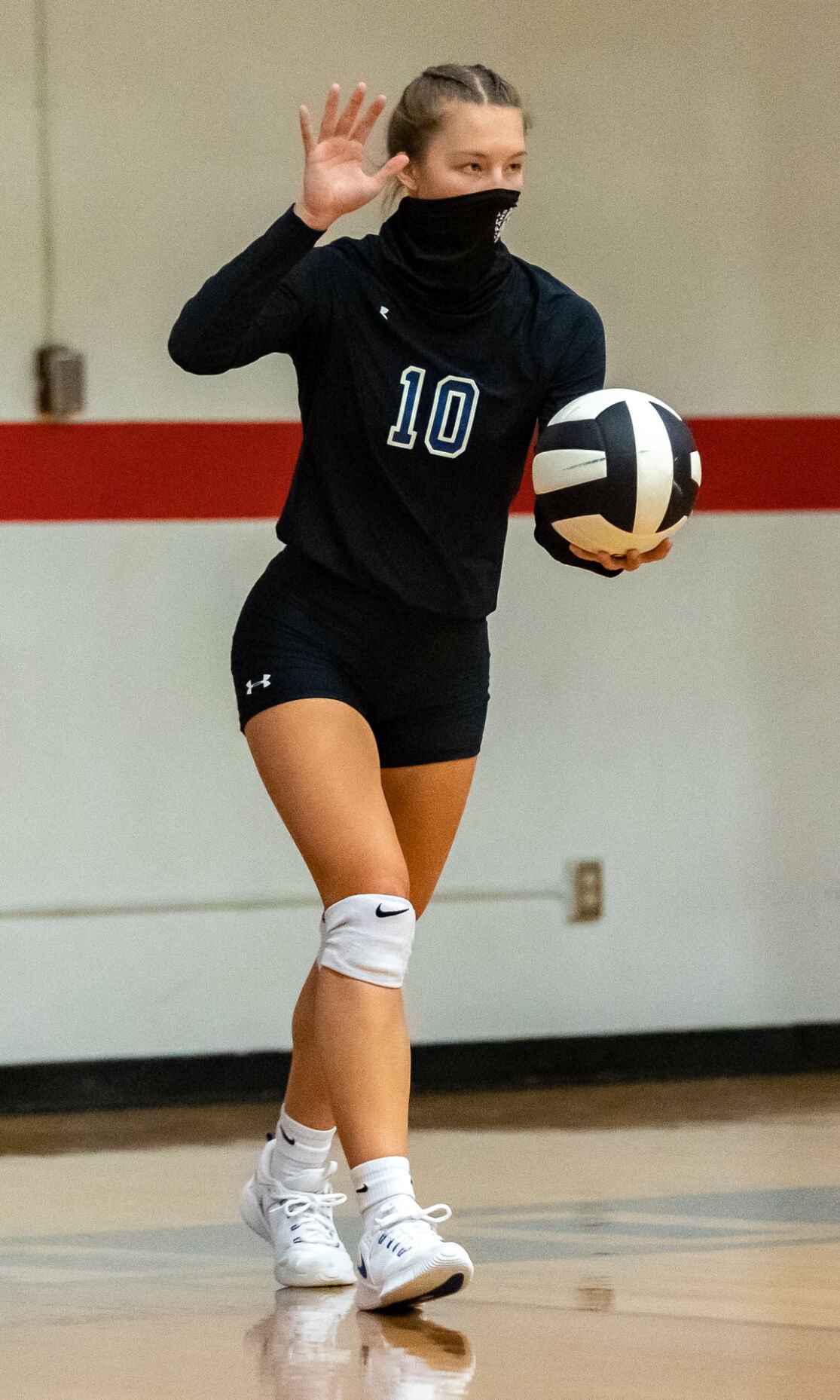 McDowell’s Jessica Cannon serves during volleyball season. She was voted the Northwestern 3A/4A Conference Player of the Year. 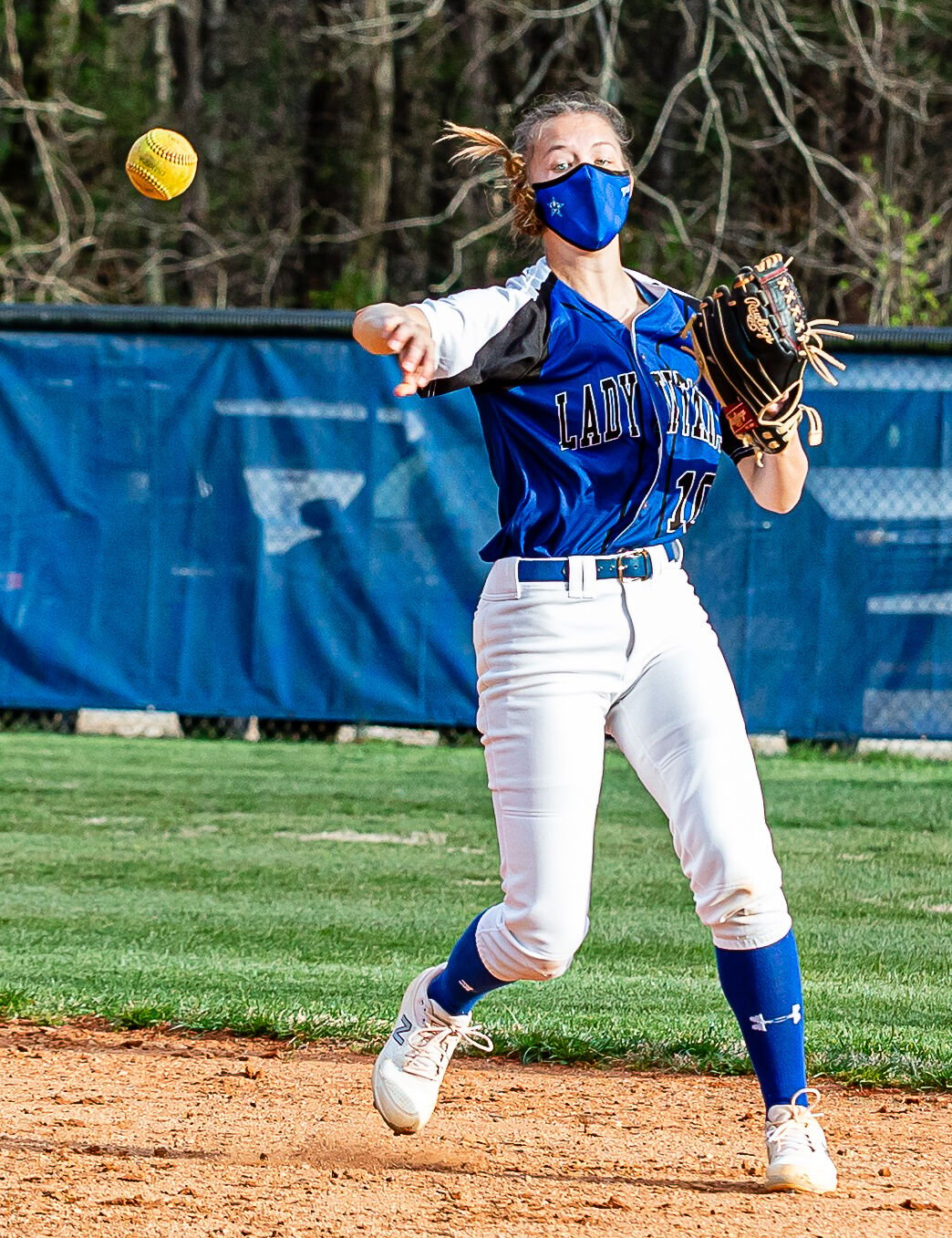 McDowell shortstop Jessica Cannon fires to first base during a game last season. Cannon was named Tri-Player of the Year in the NWC for her efforts on the diamond.

Over the nearly 50 years that McDowell High School has been in existence, there have been many talented and decorated female athletes wear a Lady Titan uniform, regardless of sport.

However, the Class of 2021 is going to have its own special place in the athletic history of the program as one particular athlete has done something almost certainly unprecedented at the school.

Soon-to-be MHS graduate and multi-sport standout Jessica Cannon has placed her name in a category that stands exclusively. With the news this week of Cannon being selected as the Northwestern 3A/4A Tri-Player of the Year in softball, she is likely the first MHS student athlete to have been chosen as the league’s top performer in two different sports in one school year.

Cannon received Player of the Year honors in volleyball back in January for a squad that went 8-5 in the truncated 2020 volleyball season, the program’s best winning percentage since 2011.

Even when you look past the current age of sports specialization, this feat is something that puts Cannon right up there with some of the best athletes to come through McDowell High, and it is an accomplishment that’s obviously not easy to pull off.

“It’s one thing to be a participant in multiple sports but to excel in both sports is quite amazing,” said McDowell Athletics Director Joe Cash. “What Jessica has done this year speaks for itself.”

What she has done statistically in both softball and volleyball has been unparalleled. And her coaches this season are not at all surprised at her accomplishments. McDowell High volleyball head coach Jessica Finley noted Cannon’s year-round work ethic.

“I’ve known Jessica going back to middle school and then getting to know her more during her time as a high school volleyball player, and it doesn’t surprise me of her accomplishments,” said Finley. “You could see from a young age that she had potential. Jessica is a hard worker and is competitive. Her work ethic in whatever sport she played was incredible. She is a level-minded girl and has been raised right. A lot of this has been a great benefit for her these past four years.

“I’m especially proud of her work this year in a pandemic. It could have been easy to lose focus, but Jessica was a steady presence. I’m honored as a coach to have been a part of her journey.”

“On the softball diamond, Jessica has been a girl that has grown into her own body over the past four years,” said Young. “She has learned to trust herself physically and know just how much she can do on the field and at the plate. That is a trait that some female athletes can’t fully grasp until their collegiate days. Jessica has been more advanced in that aspect than I’ve seen from a lot of high school kids.”

Her consistency has also been a big part in her success.

“She has always been a steady and resilient athlete in any sport that she has played,” said Young. “She’s not what I would call flashy, but she is very consistent and there is an attention to detail in her play. Jessica wasn’t a power hitter early on, but the constant work and detail made her a better player from her underclassmen years to last season as a junior. I think the consistency is what put her in the position to win the awards in softball this year. She was a well-respected player in a league that was very strong this year.”

As an outside hitter on the volleyball team, Cannon was named the Northwestern 3A/4A Player of the Year in December of 2020 and was an All-NWC selection back in 2019.

Cannon did just about everything on the floor in 2020 for the 8-5 Lady Titans. She finished with 97 kills in 13 matches but her ability to play anywhere on the floor was the difference maker between the other individual performers this season. Cannon led the way with 197 digs, 36 service aces and 19 blocks, which made her resume the best overall. Cannon was a three-year varsity team member. In two full varsity seasons, she compiled 158 kills, a service percentage of 90.8% and 213 digs.

On the diamond, Cannon shared the league’s Player of the Year award with South Caldwell’s Regan Weisner and Alexander Central’s Chesney Stikeleather. She also was an all-conference selection her sophomore year.

Her senior campaign was sparkling for McDowell.

Cannon’s career stats over four years include a .417 batting average over a 42-game span. She compiled this in 116 plate appearances, three home runs and 18 total extra-base hits, with half of them coming this season. Cannon’s fielding stats were also very impressive, posting a .902 fielding percentage and committing just 13 total errors in 133 fielding chances.

This body of work gives Cannon a standout career at McDowell High and one that you would think puts her in good standing once her eligibility for McDowell’s Athletic Hall of Fame opens down the road.

While her high school career is now complete, it does not mean the work is done. Cannon, a signee with Catawba Valley Community College’s fast-pitch program, will play American Legion Fast-pitch this summer. Her output during the spring has garnered interest from some NCAA Division I programs in recent weeks, and that may help form her path after graduation. In other words, her journey may ultimately go beyond CVCC.

McDowell’s Jessica Cannon serves during volleyball season. She was voted the Northwestern 3A/4A Conference Player of the Year.

McDowell shortstop Jessica Cannon fires to first base during a game last season. Cannon was named Tri-Player of the Year in the NWC for her efforts on the diamond.