Backs against the wall: Titans must beat Rockets to have a shot at the postseason
0 comments
Share this
{{featured_button_text}}
1 of 2 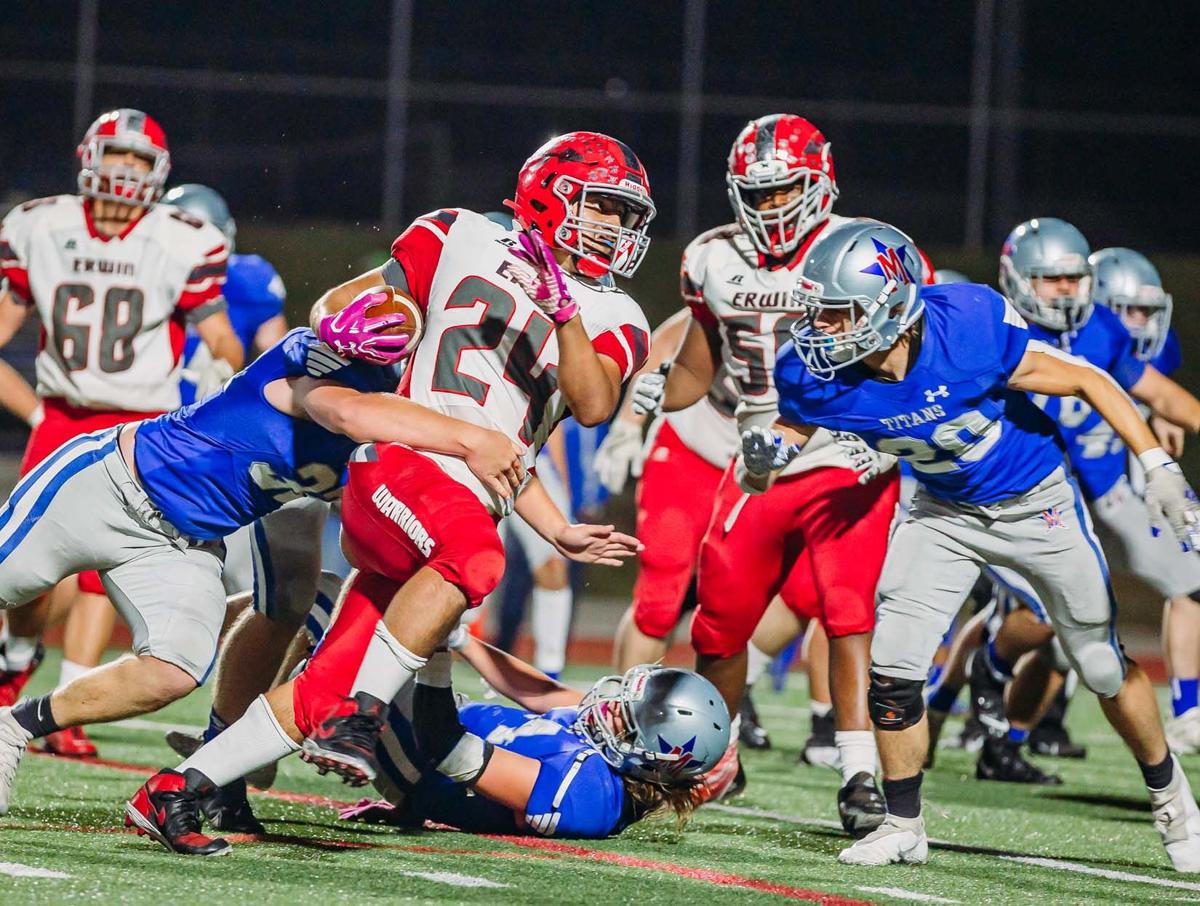 McDowell's Dawson Bartlett, 32, Rickey Carr, 14, and Kobe Nolan, 20, converge on an Erwin runner during last week's 25-14 loss. The Titans are on the road at A.C. Reynolds in the regular-season finale tonight (7 p.m. kickoff). 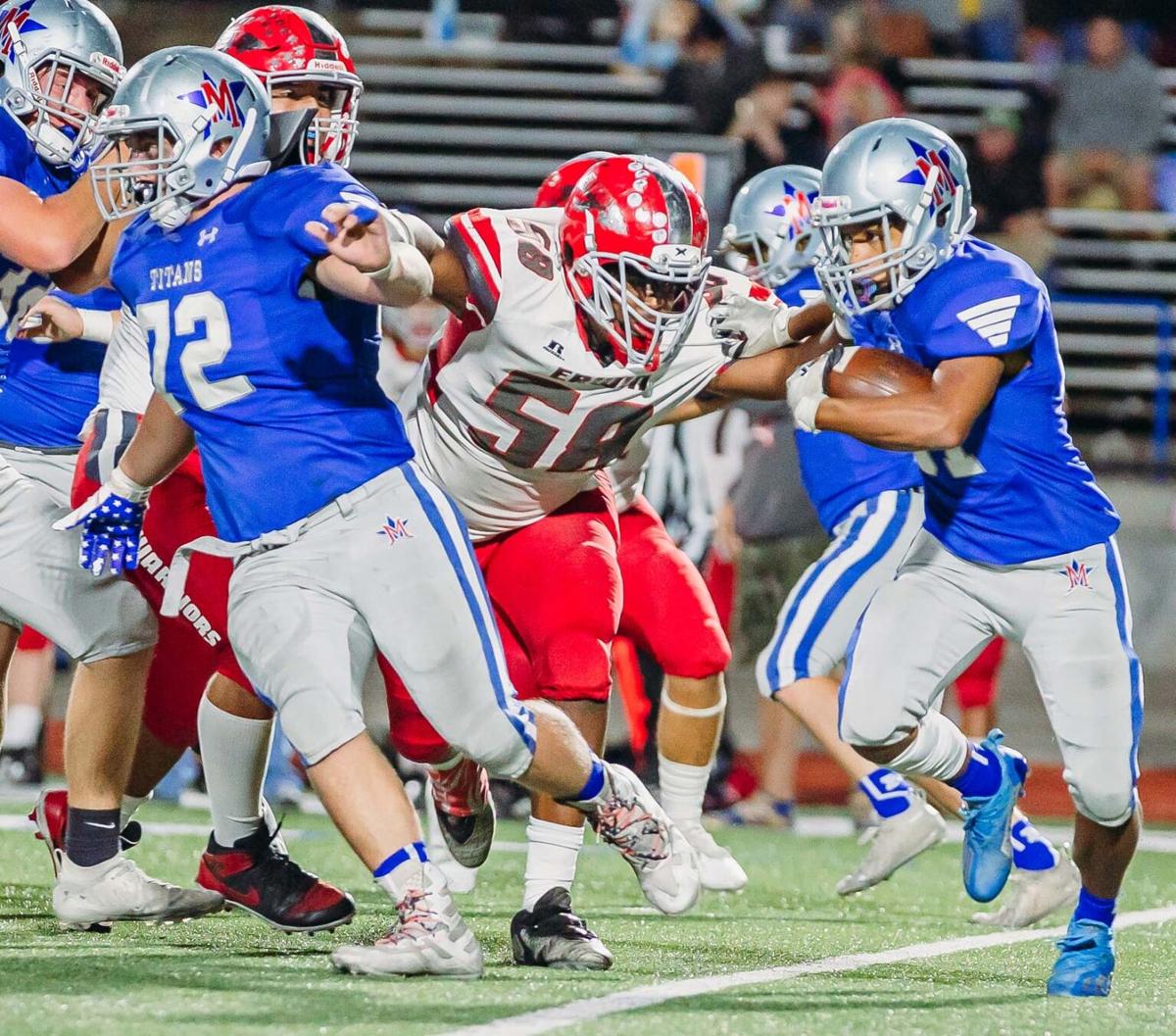 Note: "Tonight" in the story refers to Friday.

For the second week in a row, the McDowell Titans are approaching Friday night as a do-or-die playoff game.

The Titans are hoping for a better result, however.

McDowell (5-3 overall, 3-2 The Mountain Athletic 3A/4A Conference) is on the road at A.C. Reynolds tonight (7 p.m. kickoff) in a regular-season finale that could make or break McDowell’s postseason chances.

The Titans suffered a monumentally disappointing 25-14 loss to the Erwin Warriors in the home finale last week, and they fell from a tie for 32nd in RPI to 36th among western 4A schools. Only 32 clubs make the playoffs. Reynolds is currently 26th. That leaves tonight’s game against the Rockets (6-3, 4-1), as an absolute must-win if the Titans are to keep playing.

“I think if we were to win, we’ve got a pretty good shot at getting in,” said McDowell head coach Darrell Brewer. “With a loss, there’s no possible way. So this is pretty much a playoff game.”

In order to win it, the Titans will have to avoid letting Erwin beat them twice. Fortunately, Brewer doesn’t think that will be a problem.

“It’s one of those things you have to turn loose of pretty quick,” said the third-year head coach about last week’s loss. “You have to have a short memory in this business. But we’ve had a good week of practice. These kids are so resilient. That’s one thing I’ve been impressed with ever since I’ve been here. They come in on Monday and go right back to work.”

That’s just what the Titans have done this week, with a couple of notable exceptions. Senior linebacker Grayson Blackwelder, the team’s leading tackler and emotional leader, suffered a shoulder injury in the second quarter of last week’s game and has not practiced this week. As of press time Thursday, the coaches were awaiting news from doctors on Blackwelder’s status. Brewer said Blackwelder has a separated shoulder and has been undergoing treatment and rehab.

“I’m worried about him,” said Brewer. “Even if he is able to play, it’s tough to play linebacker with a bum shoulder.”

Senior defensive lineman Jake Marsh was also banged-up against Erwin, suffering a back injury that, while painful, involved only muscle tissue and no bones. Marsh has not practiced this week but may play tonight.

Junior running back Blake Boswell, who leads the team in rushing, is still nursing a sprained ankle. The injury occurred three weeks ago, but Boswell has tweaked the ankle several times since then, and that has delayed the healing process greatly. Brewer said Boswell would likely be limited tonight.

The Titans will need all available hands on deck for the Rockets. Reynolds has found its stride after a difficult start against a tough schedule, and has bounced back from its own disappointing defeat -- a 6-5 loss at Asheville on Oct. 1 -- that essentially decided the conference championship. Reynolds is coming off a dominating 52-21 win against non-conference foe R-S Central, who the Titans beat 20-14 in the season opener.

While the Rockets have struggled at times offensively, there has been no such problem on the other side of the ball. Reynolds has only allowed 100 points all season, and Brewer said the Rockets are built around their dominant defense.

“They’re a very good defensive team,” said Brewer. “Their offense is good enough to beat you, but the defense is as solid as they’ve had in a long time.”

Brewer said the Rockets come off the ball with a vengeance.

“We’ve got to go into the game hoping we can get 3 yards,” said Brewer. “We’ve got to play old-school football, and realize 3 yards is a good play. If we don’t do a good job up front, they’ll be in the backfield with us; they’ll be sitting in our laps.”

Offensively, Reynolds relies on sophomore quarterback Ricky Tolbert (6-2, 195). Tolbert is 51-of-75 passing for 592 yards and three touchdowns with three interceptions.

Freshman running back Max Guest is the leading ground-gainer with 618 yards and nine scores on 121 carries. Senior receiver Machi Ikeme (5-9, 150) is tops on the team in receiving with 316 yards and a score on 29 catches.

McDowell counters with senior quarterback Gabe Marsh, who is 71-of-122 for 914 yards and five scores with seven picks. Marsh is trying to become the 14th 1,000-yard passer in school history.

Boswell is the leading rusher with 663 yards and six TDs on 122 carries. But McDowell has gotten solid contributions from freshman running back Josh Ellis (46-322-3TDs) and senior running back Kiyaun Selby (46-320-2TDs), who were both factors even before Boswell was injured.

Blackwelder’s 65 tackles and 11 tackles for losses lead the team. Junior linebacker Dawson Bartlett (43 tackles) is coming off a monster game against Erwin, where he had 13 tackles, 10 of them solo, and a fumble recovery.

Over the years, few teams have had the Titans’ number the way the Rockets have. McDowell is 3-19 against Reynolds all-time and has lost 17 in a row to the Rockets. It’s far and away the Titans’ longest losing streak to a single opponent. Reynolds is responsible for the four highest-scoring games by an opponent in McDowell history, including an all-time high of 72. During a three-game span from 2013-15, the Rockets put up 201 points against the Titans, an average of 67 per game.

Down to the wire: East McDowell takes 2 close ones from West in middle school hoops

Greeting the season: McDowell basketball teams getting ready for 2021-22 season

Practice is in full swing for the 2021-22 high school basketball season. Photographer Josh Davis captured these images of some early season pr…

McDowell's Dawson Bartlett, 32, Rickey Carr, 14, and Kobe Nolan, 20, converge on an Erwin runner during last week's 25-14 loss. The Titans are on the road at A.C. Reynolds in the regular-season finale tonight (7 p.m. kickoff).