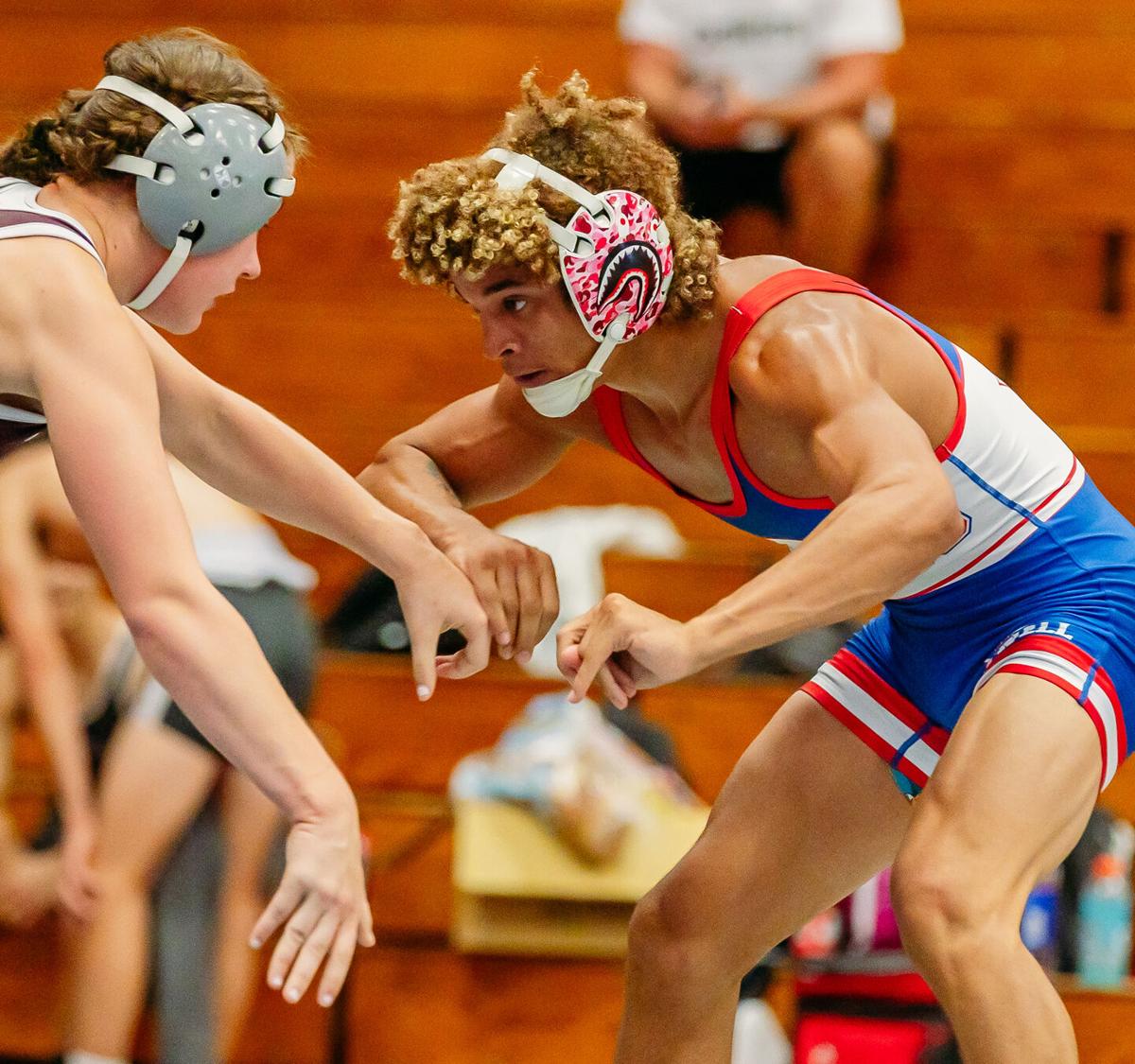 McDowell Titans 132-pounder Toby Finn gets set to go against South Caldwell’s Jade Hutto in the semifinals of the Northwestern 3A/4A Conference tournament Thursday at McDowell. Finn claimed his second straight conference championship and was named the tournament’s Most Outstanding Wrestler. 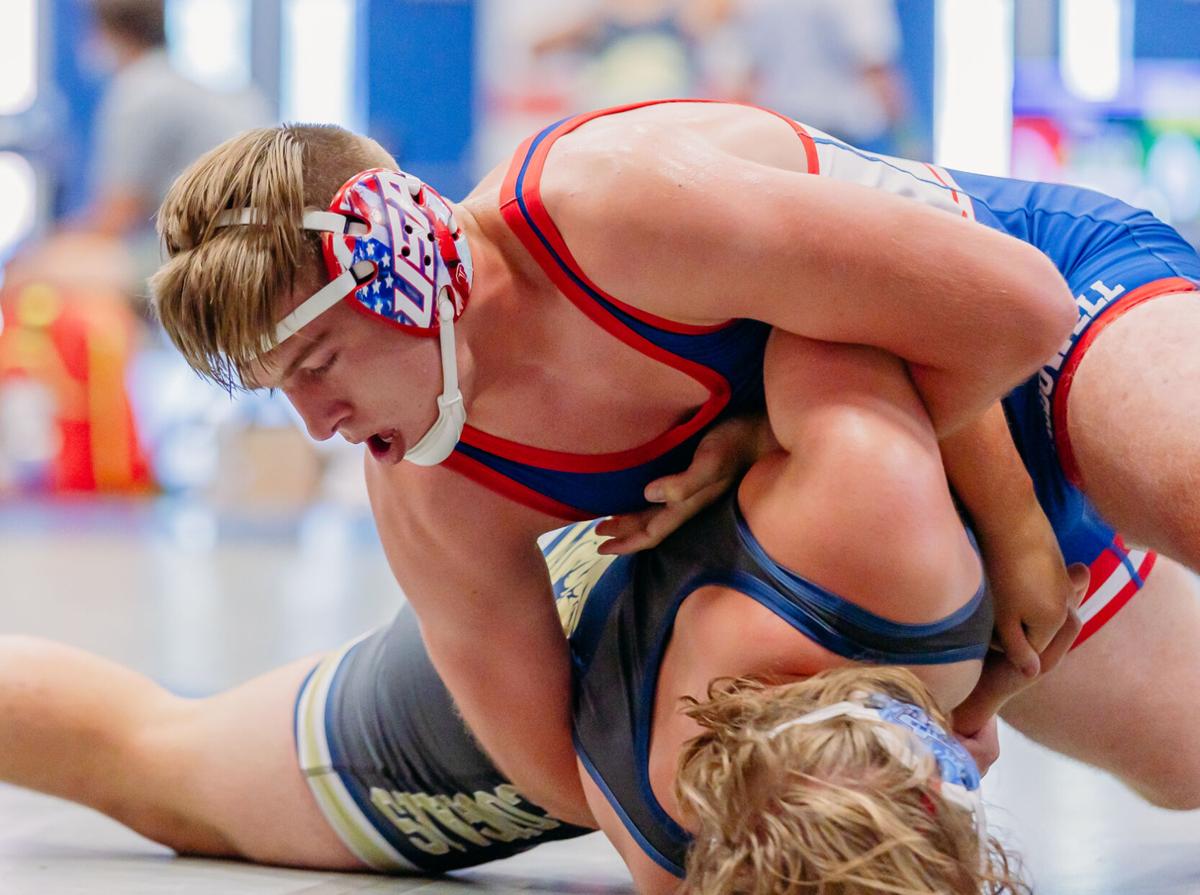 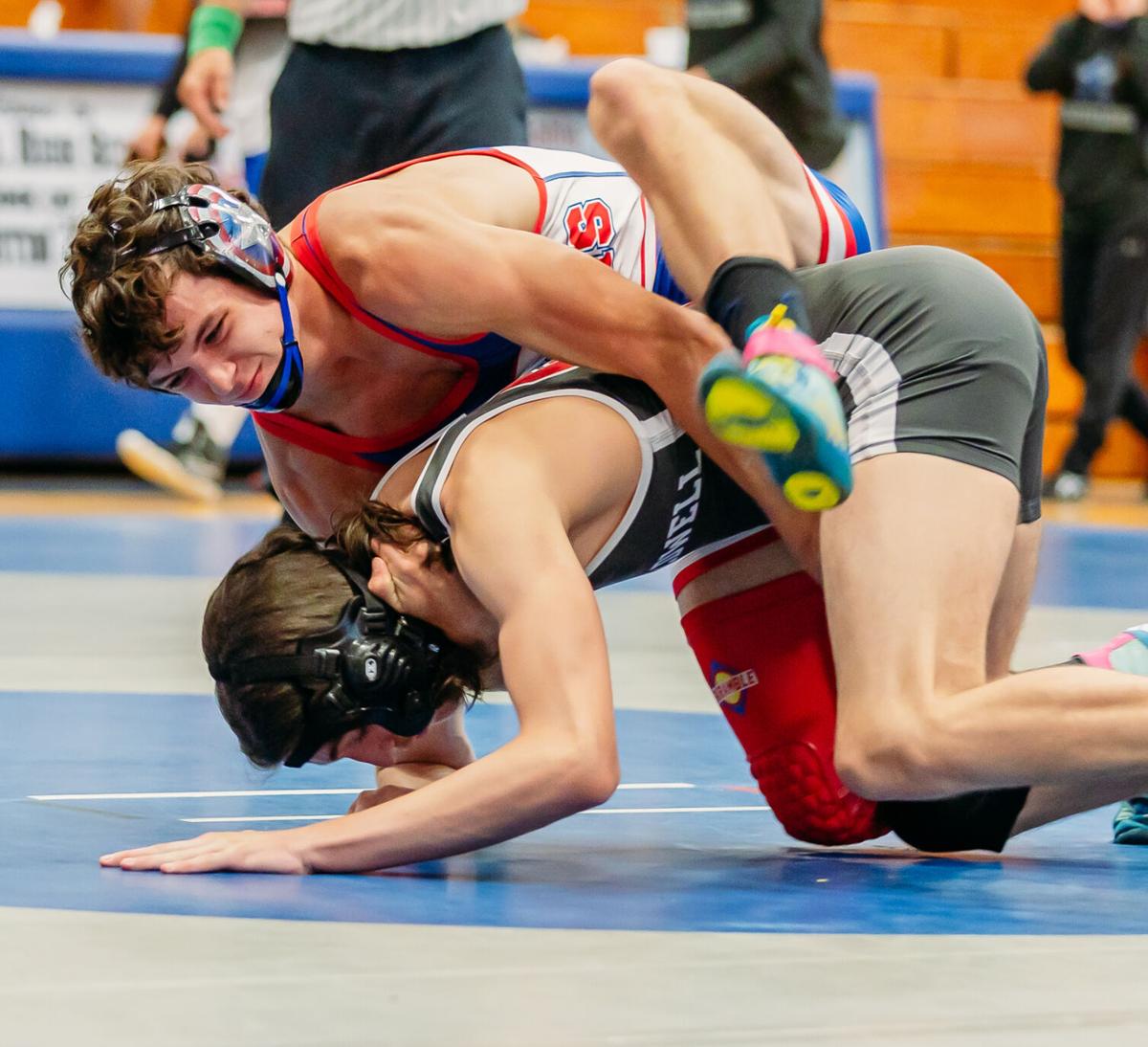 St. Stephens scored 191 points to take the league championship Thursday at Titan Gym, while McDowell put up 167 and finished second. Alexander Central was a distant third with 103 points.

The Indians had six individual champions, while the Titans had five champs, including undefeated senior Toby Finn, who won Most Outstanding Wrestler honors.

Finn, who won his second consecutive conference championship, opened with a first-round bye and then pinned South Caldwell’s Jade Hutto in the semifinals. In the finals, Finn took care of St. Stephens’ Brady Connell with a 15-6 major decision.

Dennison, who also won for the second time and was the MOW in the previous conference tournament (2019-20), got a bye into the finals. He then pinned Jacob Schwartz of St. Stephens in the first period of the title bout.

Stevenson, a third-place finisher in 2019-20, also got a first-round bye. He made short work of his next two opponents, pinning Riley Thacker of South Caldwell in the semifinals and Will Moore of St. Stephens in the championship bout, with both pins coming in the first period.

Barrier, who placed third in the most recent NWC tourney, also pinned his way to a championship. Barrier stuck Watauga’s William Bouboulis in the first period in the semis, and then pinned Alexander Central’s Logan Shoemaker in the second period to claim the championship.

Campbell provided some drama in pursuit of his first NWC championship. After a first-round bye, Campbell scored a third-period pin of Alexander Central’s Nathaniel Dahlstrom. In the finals, Campbell and Freedom’s Fredy Vicente Perez went into overtime before Campbell rallied for a 5-4 victory.

Lytle, who finished second for the second straight time, opened with a 6-1 decision over Alexander Central’s Noah Medders. Top-seeded Andre Britt of St. Stephens pinned Lytle in the championship bout at a tough weight, where all four wrestlers in the tourney entered with winning records.

Punch pinned Alexander Central’s Christian McGalliard in the semifinals, and battled St. Stephens’ Evan Trossi to a hard-fought 13-10 decision in the finals.

Hughes was pinned by St. Stephens Cesar Chavez Alonzo in the only bout at 113 pounds.

Roberts had one win in the tourney, pinning Watauga’s Jacob Steadman. Roberts eventually dropped a 7-2 decision to Kanon Harrington of Alexander Central in the consolation finals.

Burnette picked up a 12-0 major decision over Watauga’s Palmer Smith, and was eventually pinned by Saint’s Beck Nestor in the third-place match.

Next up for the Titans are the individual West 4A Regionals next Tuesday at Mallard Creek.

The McDowell Lady Titans wrapped up the tennis regular season with a solid, 5-4 win over Hickory on the road Thursday.

McDowell Titans 132-pounder Toby Finn gets set to go against South Caldwell’s Jade Hutto in the semifinals of the Northwestern 3A/4A Conference tournament Thursday at McDowell. Finn claimed his second straight conference championship and was named the tournament’s Most Outstanding Wrestler.