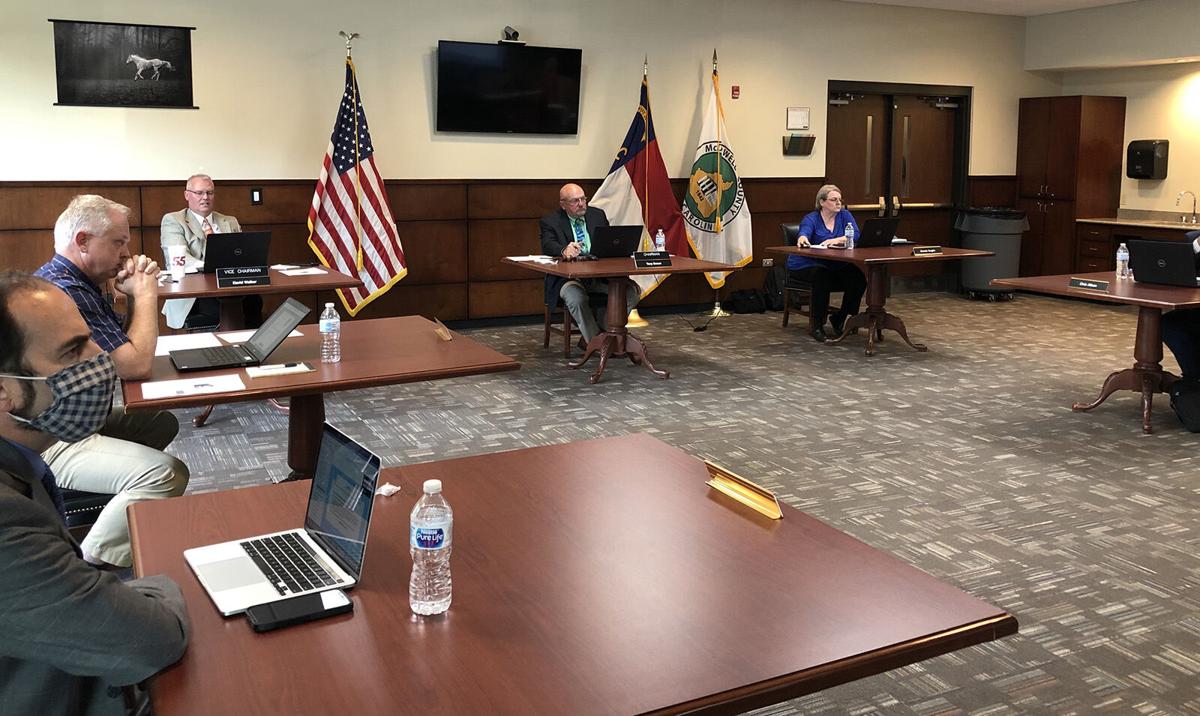 The McDowell County Board of Commissioners met Monday at the Universal Advanced Manufacturing Center. 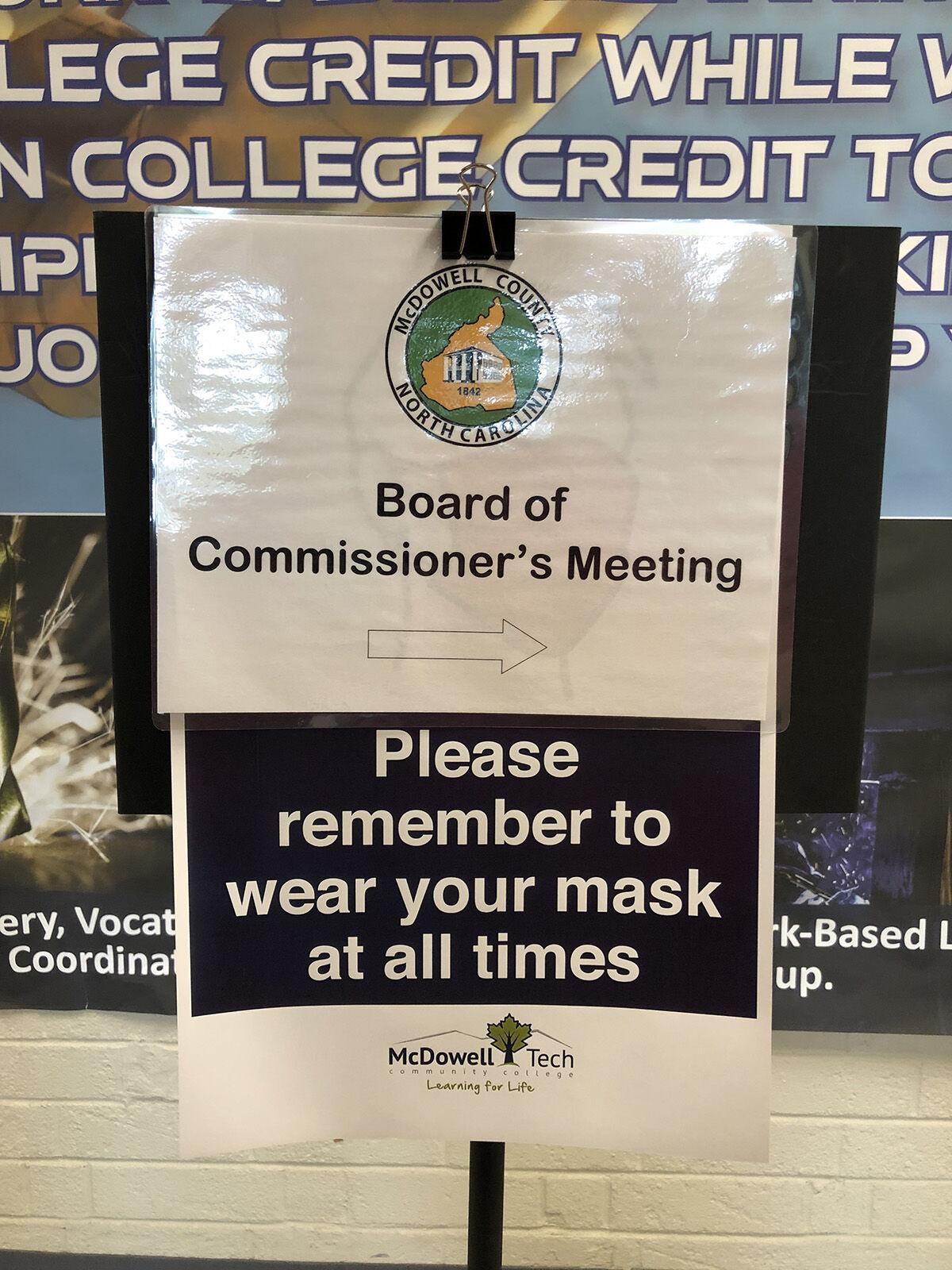 This is the sign informing all who attend to wear a face mask during the meeting of the McDowell County Commissioners. 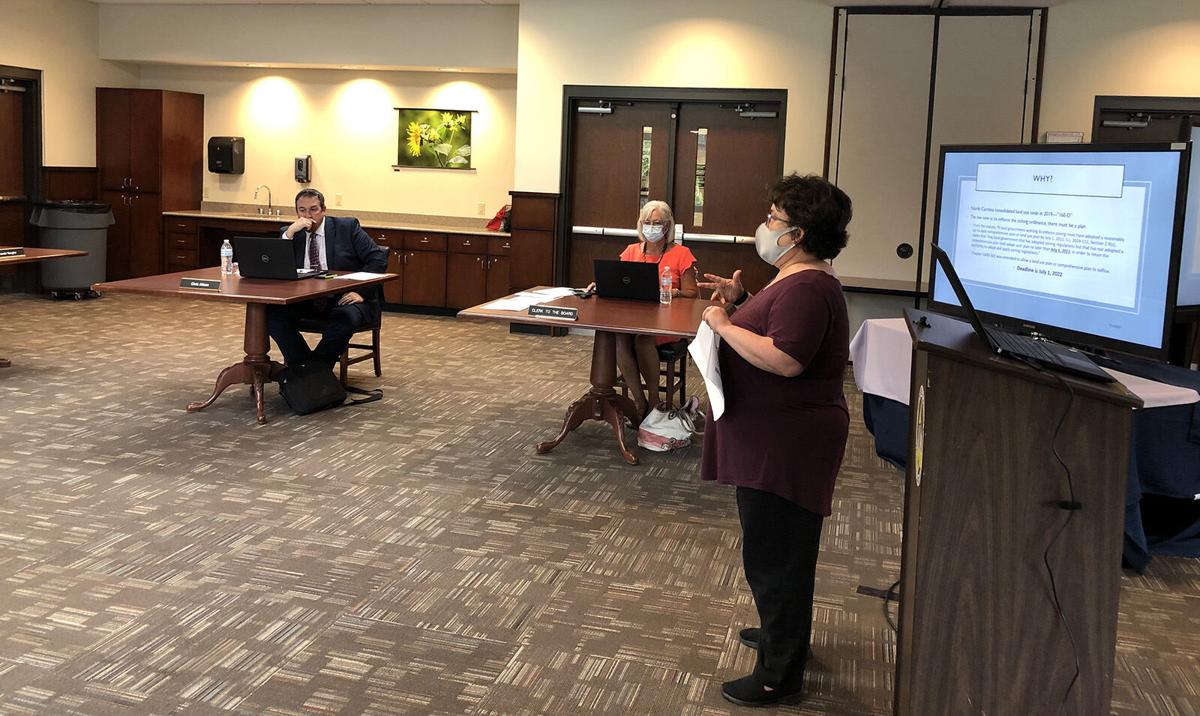 The commissioners talked Monday about the update of the county’s land use plan. State law requires every county to update its plan for land use. Foothills Regional Commission was selected some time ago to work on this update. Karyl Fuller from the FRC gave the board an overview of this process.

During the regular Monday meeting, the McDowell County Board of Commissioners agreed to use $3 million of the federal money for COVID relief for the county’s water system.

The American Rescue Plan Act of 2021 was signed into law by President Joe Biden to provide additional relief for individuals and businesses affected by the coronavirus pandemic. It includes funding for state and local governments as well as COVID-19-related testing, vaccination support and research. McDowell County’s portion is estimated to be $8.8 million, according to County Manager Ashley Wooten.

The commissioners have already authorized using this federal money on a water line design for the Nebo water system, a short water line extension on Stacy Hill Road and stormwater improvements.

Last month, the commissioners approved using some more of this federal money as an incentive for county employees to get fully vaccinated for COVID. This incentive would be given to county workers when they show proof of getting the Moderna, Pfizer or Johnson & Johnson vaccines. The deadline for this is Oct. 1. County workers who have already been vaccinated will get the incentive or bonus retroactively.

At Monday’s meeting, the commissioners talked about how to use the rest of this money. Local government officials are limited in what they can do with it.

Commission Chairman David Walker made a motion to designate $4 million of the American Rescue Plan money for the county’s water system.

Commission Chairman Tony Brown said he agreed with using it for the water system but added the $4 million should be done in two installments.

Walker withdrew his motion and made another motion for it to be $3 million. It was passed unanimously.

The commissioners heard from Matt Jackson, who is a strong supporter of the Second Amendment. Jackson spoke to the commissioners during the public comment portion of the meeting and has done so during previous meetings.

“In previous visits to this commission, I have been very pleased with the commitment of this body and the commitment to the Second Amendment and to the rights of the voters in this county,” he said. “However in light of recent actions by the Biden regime and the federal government, I believe it is appropriate and necessary to press this commission on the specifics of that commitment. The Biden regime has openly signaled its intention recently to forward an aggressive and expanded gun control agenda, including bans on guns and possible confiscation, including expanding bans to include common personal defense weapons such as 9 mm handguns. This is a major escalation in this regime’s attack on the Second Amendment.”

Jackson also talked about the “Biden regime” deploying “what they call COVID strike teams” in the Charlotte area. “These strike teams would be going to the homes of taxpaying voters with the intent of pressuring them to take the still largely experimental, non-FDA approved vaccines,” he said.

Jackson wanted to know what specific steps the commissioners will take to protect local residents from the threats by the “Biden regime” and asked for the sheriff to attend next month’s meeting about these “threats.” The commissioners said they would follow up on what he asked them to do.

In other business, the McDowell County Commissioners:

Talked about the update of the county’s land use plan. State law requires every county to update its plan for land use. Foothills Regional Commission was selected some time ago to work on this update. Karyl Fuller from the FRC gave the board an overview of this process. She will speak to the county’s Planning Board later in the month.

Heard an update from Weyland Prebor, director of the Senior Center in Marion and the Bud Hogan Center in Old Fort. Last year because of COVID-19, the centers had to close the dining rooms and instead provided boxed meals to senior residents. Earlier this year, the dining rooms were reopened but then had to be closed again because of the rise in COVID cases. “It’s been difficult for our seniors,” said Prebor.

Heard a report from Brad Ayers and Bob Lillie of Optimum Broadband (formerly Morris Broadband). They gave an update on new investments their company is making in their service area. Optimum Broadband has cable TV and Internet customers in eastern McDowell County. The company plans to expand broadband Internet service to those parts of the county. “We’re excited about this,” said Commissioner Patrick Ellis, adding many people in McDowell don’t have broadband Internet. “We’ve been very aggressive in expanding our footprint,” said Ayers.

Talked about hiring a qualified firm to perform a comprehensive pay and classification study for county staff. Three firms have submitted proposals. The two lowest-cost firms submitted the same price for very similar work. Both had excellent references but county staff felt that one firm, the MAPS Group, would be the best one for this project. The total cost of the study is $32,000. Brown said he would rather spend county money on increasing employee salaries than on a study. Ellis made a motion to table the pay study but have the county departments come back with three-year budgets. After a discussion, the board agreed to table this indefinitely.

Approved a new name for the County Administration Building on East Court Street. Since the county administrative offices are being moved to the Main Street building, the large concrete structure on East Court Street that was built in 1976 will now be called the McDowell County Services Building. The new Emergency Services headquarters building project is also continuing. That contractor is facing some material delays but is scheduled for an early 2022 completion. The public shooting range project continues. The construction of the physical structures has begun. The operational items will be discussed more in future months.

Approved the fire agreement for the Marion Area Service District.

Approved having an evaluation of the county’s transfer station on N.C. 226 South. Based on a consultant’s report, it is evident that the current transfer station facility, which is more than 30 years old, will need a major rehabilitation or replacement within the next few years.

Agreed to use $2,500 out of the courthouse project fund to buy a new and larger Christmas decoration over Main Street. This is part of the city of Marion’s effort to improve the look of the downtown during the Christmas season.

Two people face drug charges after local authorities obtained a search warrant on a home, according to a report.

On Thursday, Sept. 9, Foothills Conservancy of North Carolina purchased 130 acres along N.C. 80 and Buck Creek in McDowell County, between Mar…

The McDowell County Board of Commissioners met Monday at the Universal Advanced Manufacturing Center.

This is the sign informing all who attend to wear a face mask during the meeting of the McDowell County Commissioners.

The commissioners talked Monday about the update of the county’s land use plan. State law requires every county to update its plan for land use. Foothills Regional Commission was selected some time ago to work on this update. Karyl Fuller from the FRC gave the board an overview of this process.