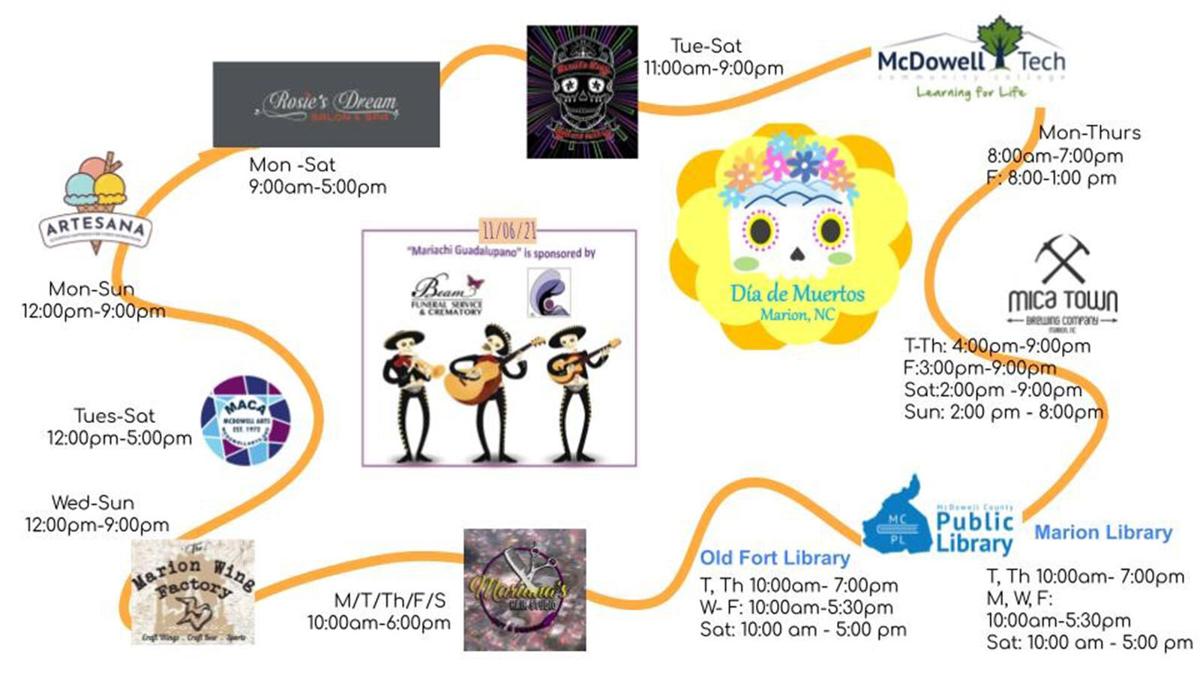 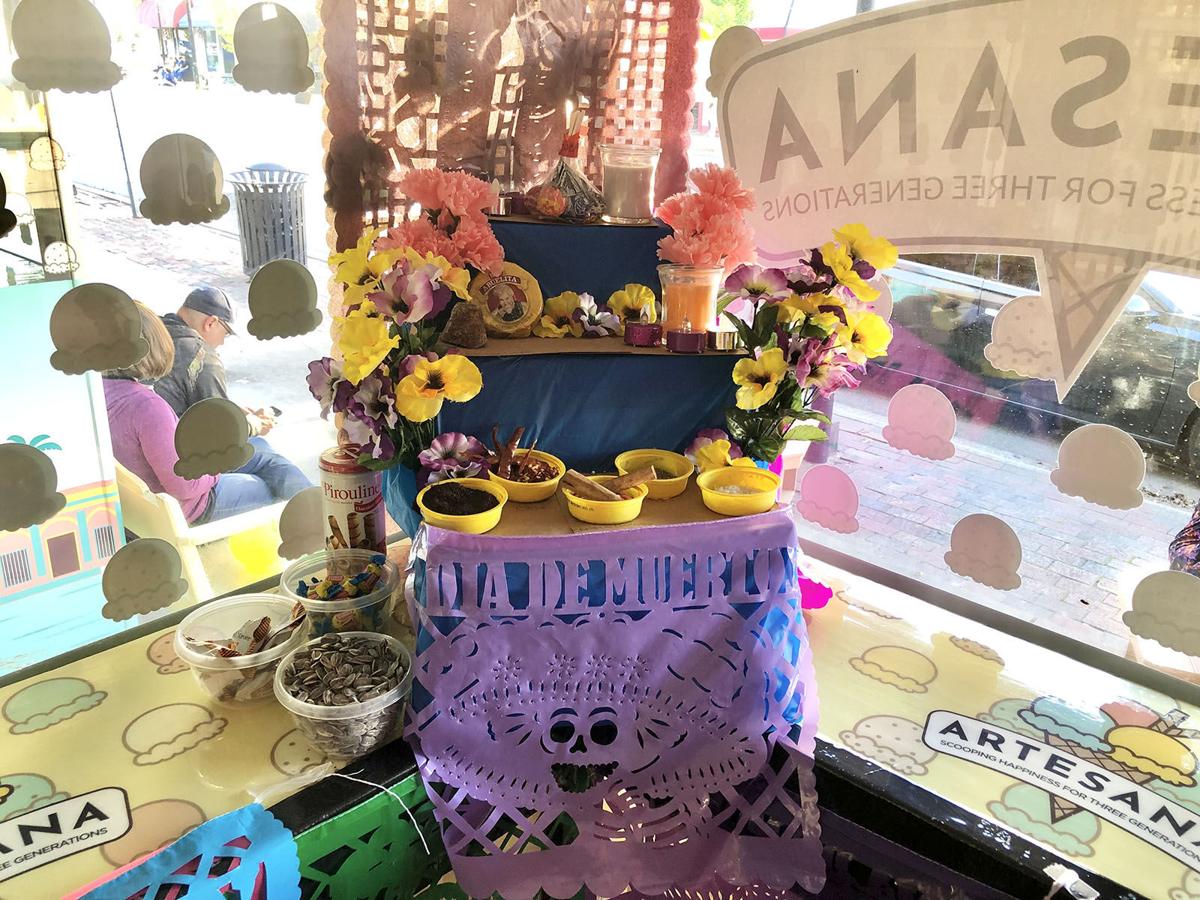 The ofrenda at Artesana Ice Cream is dedicated to the fathers and grandparents of the owners, who started the ice cream business. 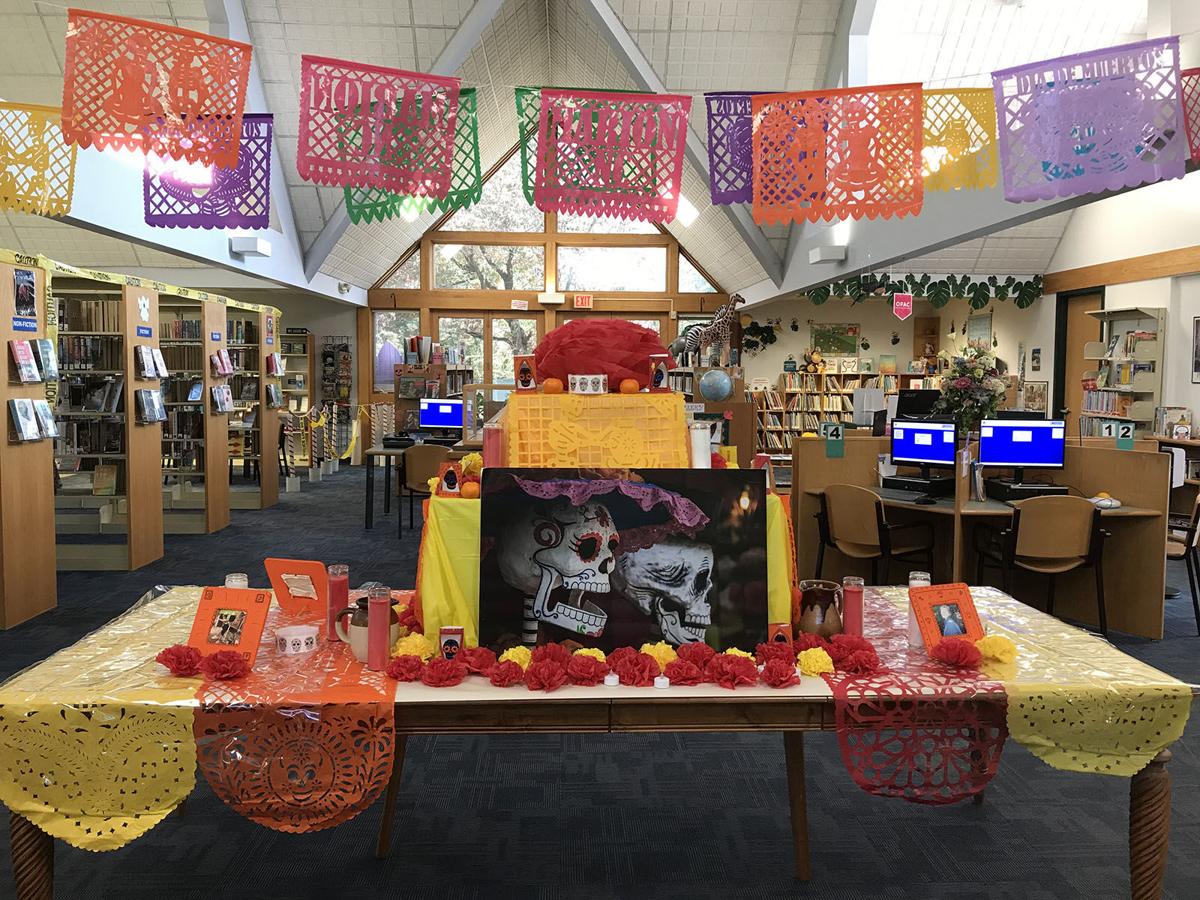 This is the ofrenda at the McDowell County Library in Old Fort. It is open for everyone who would like to participate and bring their pictures. 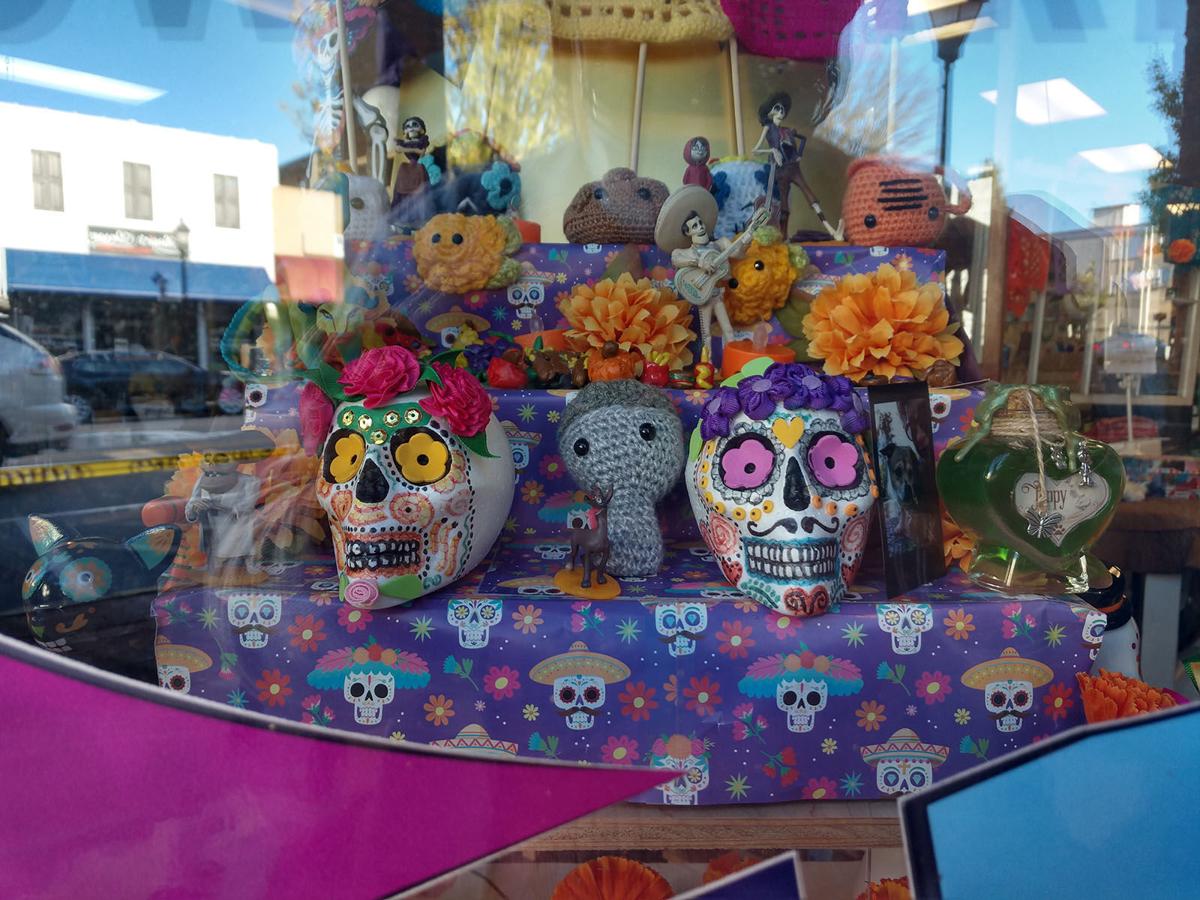 This is the ofrenda at MACA for the Dia de Muertos celebration for 2021. 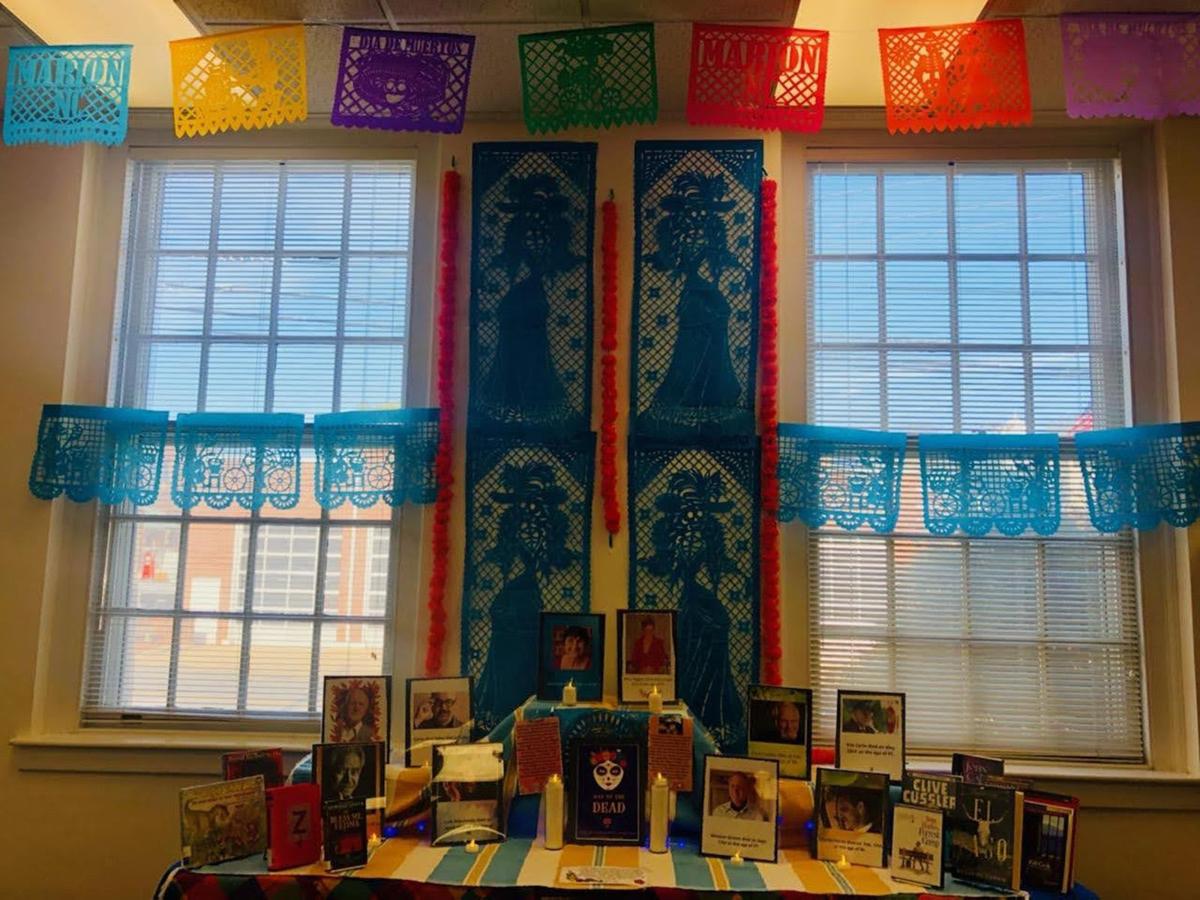 The McDowell County Public Library in Marion’s ofrenda is dedicated to all authors who have passed away during the pandemic.

Downtown Marion’s Dia de Muertos festival for 2021 is now underway, and it is bigger than ever.

Starting in 2017, downtown Marion has hosted the annual Dia de Muertos complete with mariachi music, traditional Mexican foods and drinks and games for children. This special event, an annual tradition in Mexico, helps people honor the memories of their loved ones who have passed away.

For three years, the event was held at the City Stage at Marion’s North Block. But due to the ongoing COVID-19 pandemic, most downtown festivals have been cancelled or postponed, including the WNC Bigfoot Festival and Mountain Glory here in Marion.

Last year due to COVID-19, the Dia de Muertos took place but it was reimagined as a three-week long cultural event and “an opportunity to celebrate the lives of those we love and miss while sharing in the traditions of our diverse community.”

This year, Dia de Muertos is back and it is taking place now and will last until Sunday, Nov. 7. It will cover different parts of Marion and include Old Fort too.

Silvia Martin del Campo, organizer of the local celebration, said for this year she wanted the community to get more involved in the process of celebrating Dia de Muertos.

“Let me share a little bit behind the scenes,” del Campo said to The McDowell News. “Plan A was to have the festival on Nov. 6 on Main Street. Everything was ready and we were going to go bigger and have two music bands with a huge ofrenda, set up by a team of 10 teachers from Mexico.

“However, we want to follow the safety guidelines and canceled the festival on Main Street after watching other events in downtown getting canceled. With that being said, I started planning version B of the festival. Many businesses during the last years have been very supportive, and they wanted to participate this year as well. So I invited them to set up an ofrenda with a topic related to their business and organization.”

Different parts of Mexico celebrates it their own way. Some might just remember their departed loved ones, light up a candle next to their picture and set a flower bouquet, set up a traditional “ofrenda” at their homes, or possibly gather together with their family at the graveyard to decorate the tomb. Although the holiday’s name is translated as “Day of the Dead,” it is a time to celebrate life by remembering and honoring those we have lost, according to information from del Campo.

On Saturday, Nov. 6, the mariachi band will come back to downtown Marion and play at MACA as a closure of the festival that will last three weeks.

“People can look at the Ofrenda Map and look at the best times to tour them all at once or come at different times to enjoy them,” said del Campo. “I can see that more and more people in our community are interested in this holiday, which is a living cultural tradition that honors and remembers all those family and friends who have passed away. I’m so thankful for everyone in Marion that has approached me to be a sponsor or participate in this festival. Anyone can come and enjoy the colors, the different items, original ideas of each of the ofrendas from now and until Sunday, Nov. 7.”

Police in standoff with man locked in apartment in Morganton

Police have been in an hours-long standoff with a man who locked himself in an apartment in Morganton.

Pets of the Week for McDowell

Day One Animal Rescue is a nonprofit, no-kill animal rescue working to save animals from neglect and euthanasia in McDowell County and surroun…

Pierce Bradley, father of Marion's five lane, passes away at 96

If you look around Marion’s five lane corridor, you will see the legacy of Pierce S. Bradley Jr. everywhere.

On Saturday, you can get out and support the 50-plus local crafters and makers from McDowell at the Shop Small Main Street Crawl in downtown Marion.

The ofrenda at Artesana Ice Cream is dedicated to the fathers and grandparents of the owners, who started the ice cream business.

This is the ofrenda at the McDowell County Library in Old Fort. It is open for everyone who would like to participate and bring their pictures.

This is the ofrenda at MACA for the Dia de Muertos celebration for 2021.

The McDowell County Public Library in Marion’s ofrenda is dedicated to all authors who have passed away during the pandemic.