A Marion man has been sentenced to prison for sex crimes, including paying to watch a livestream of abuse of children overseas, authorities sa…

A Marion man reported on Friday, Jan. 21, 2022, that someone stole his 2000’s model, red Honda Foreman four-wheeler from a Nix Creek Road address.

UPDATE: Kalone Jajuante Maxwell has been located and taken into custody. 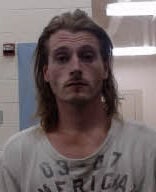