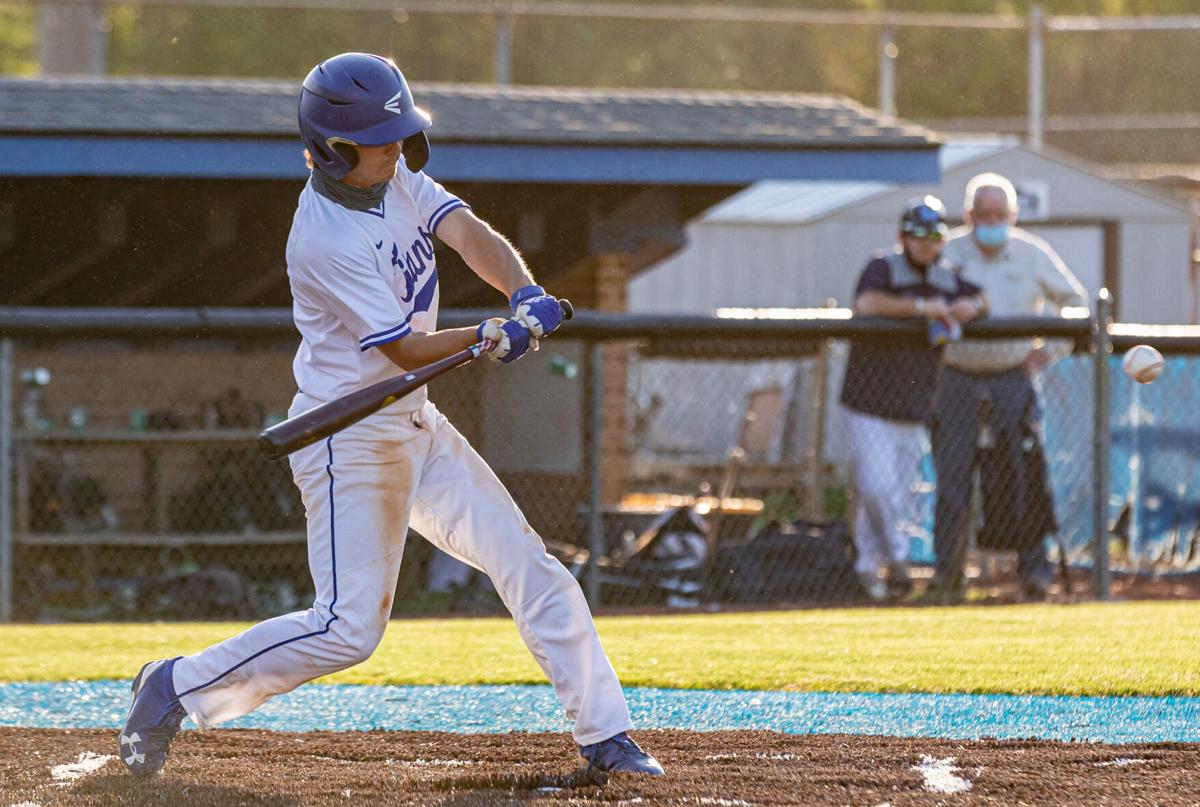 The Titans’ Three Young swings during a recent game. McDowell defeated Watauga 12-6 Friday to stay tied with St. Stephens for the lead in the Northwestern 3A/4A Conference. 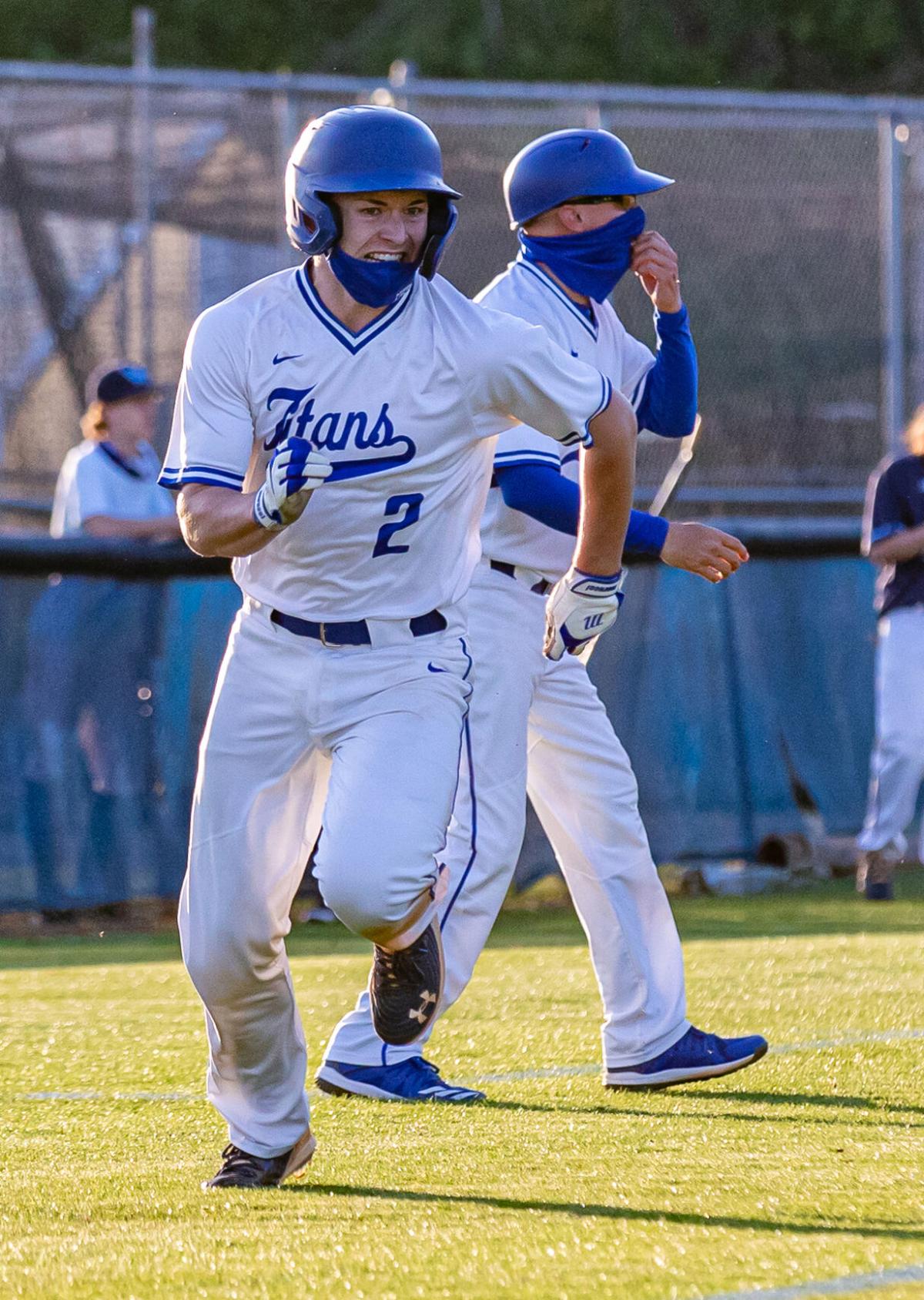 McDowell's Logan Duncan digs for home while head coach Alex Smith directs traffic behind him during a recent game. McDowell hosts Alexander Central on Tuesday as the Titans try to remain tied atop the NWC standings.

The McDowell Titans’ pitching staff has been a dominant force so far this baseball season, but you can’t expect near perfection every time out.

Friday night on the road, the Titans used their bats to help propel the team to a 12-6 win at Watauga to maintain a share of the Northwestern 3A/4A Conference lead.

McDowell (7-1 overall, 6-1 NWC) has now won five straight contests and remains in a tie with St. Stephens at the top of the league standings as the second half of conference play is underway.

With the help of four batters with multi-hit performances, the Titans collected 11 hits in total on Friday night against a Watauga squad that was on a roll, winning its last five after starting the season with a pair of losses. The timely hitting helped McDowell overcome an uncharacteristically high five errors.

Starting pitcher Dusty Revis had a huge night at the plate, going 2-for-5 with a triple, a home run, two runs scored and two RBIs.

Third baseman Benjamin Barnes (.292 avg) had a big night at the dish, going 3-for-4 with a double to jump his batting average to near the .300 mark. Barnes drove in three and scored once.

Left fielder Ethan Hamm (1-4, 2R, RBI) and second baseman Logan Duncan (1-4, 2R, SB) rounded out the contributions with a hit each. Three Young (2R, 2BB) and Michael Lewis each drove in a run.

McDowell jumped out to a 3-0 lead after two and a half innings.

Revis led off the game with a solo home run to center, the first dinger for the Titans this season.

However the Titans responded with eight combined runs in the fourth and fifth innings that helped gain enough separation from the Pioneers.

All six of the runs scored in the fourth came with two outs.

Three Young earned a two-out, bases-loaded walk off Thomas Clements, scoring Ethan Hensley (SB) to give McDowell a 4-2 advantage. Hamm was then hit by a pitch from Clements on a 1-0 count, padding the lead to 5-2. Watauga pitching allowed another hit by pitch and a walk in the frame, and then Black’s single to left scored Hamm, making it 8-2.

In the fifth Duncan walked to lead off the frame. Revis then tripled to right and Matson followed with a basehit that made it 11-2.

Watauga did score four times in the bottom of the fifth to try to get back in the game late, getting within an 11-6 deficit. However, it wasn’t enough.

The Titans tacked on an insurance run in the top of the seventh courtesy of an RBI single from Barnes.

The earned runs allowed by Revis in the third snapped a streak of 15 2/3 innings in which the senior had not allowed an earned run. After Friday’s win, Revis still holds an impressive 1.21 earned run average on the season in over 17 innings pitched.

Ty Smith worked the final 2 2/3 for the Titans, allowing an unearned run on two hits. He struck out two and walked one.

McDowell will bring its five-game winning streak home to Titan Field on Tuesday night as the Titans will host Alexander Central (1-7, 1-6). McDowell earned a 4-1 road win in Taylorsville on April 30. The Cougars were defeated by St. Stephens 3-1 on Friday.

The Titans’ Three Young swings during a recent game. McDowell defeated Watauga 12-6 Friday to stay tied with St. Stephens for the lead in the Northwestern 3A/4A Conference.

McDowell's Logan Duncan digs for home while head coach Alex Smith directs traffic behind him during a recent game. McDowell hosts Alexander Central on Tuesday as the Titans try to remain tied atop the NWC standings.