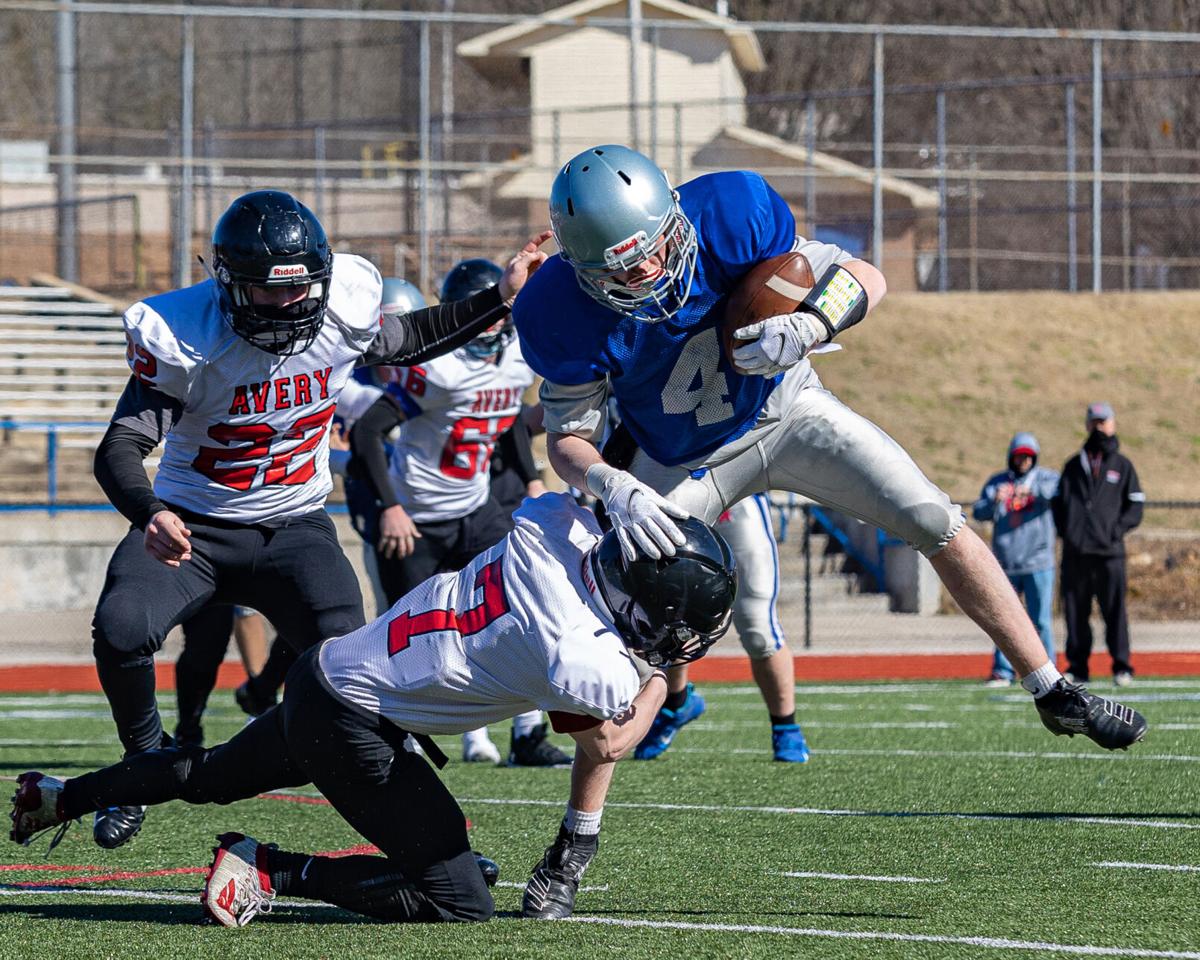 Titans running back Jacob Pearson tries to avoid a tackle during last Saturday's scrimmage with Avery. McDowell opens the 2021 season Friday night at Hickory. The COVID-shortened season includes just six games for the Titans, all of them Northwestern 3A/4A Conference contests. 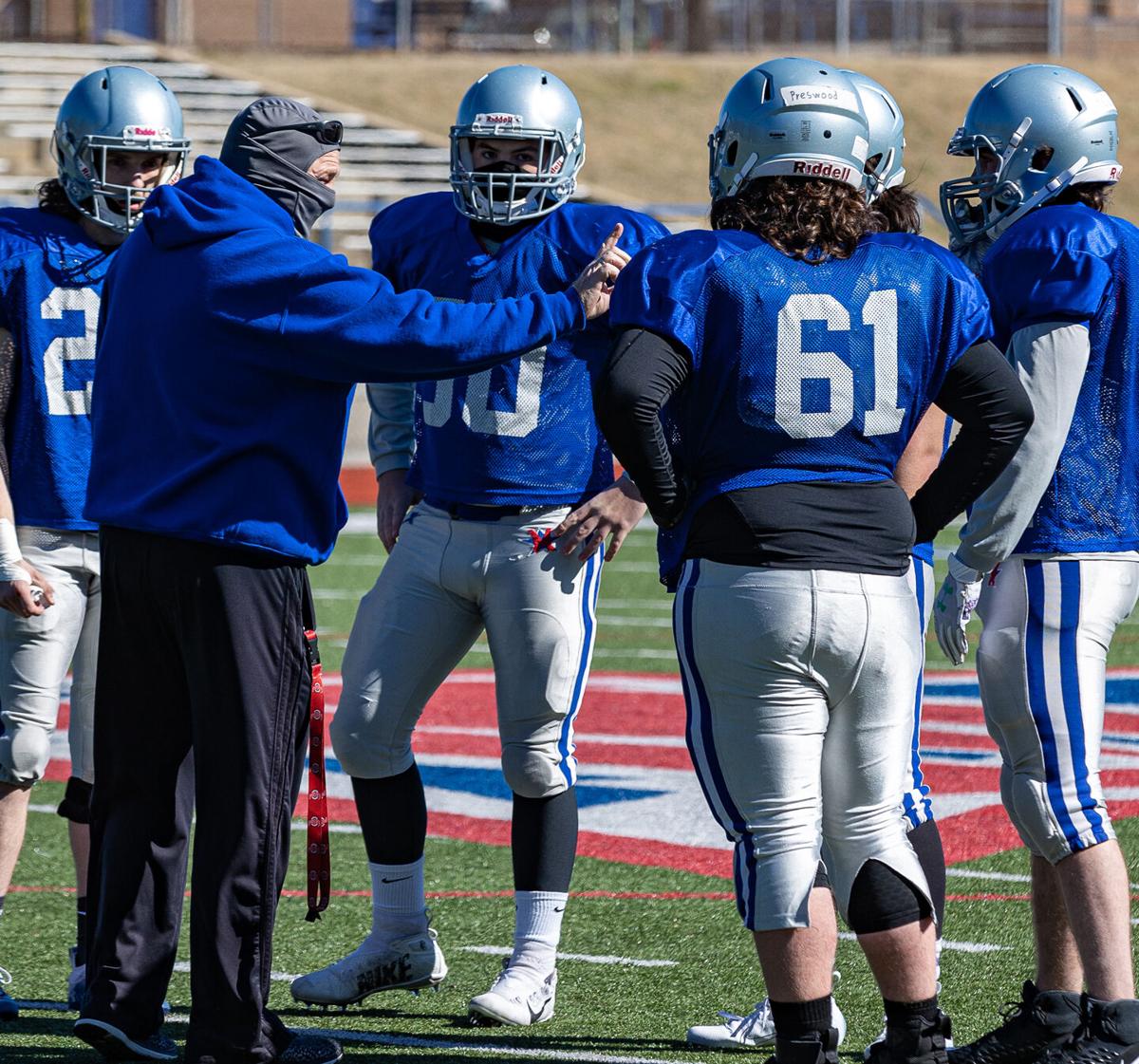 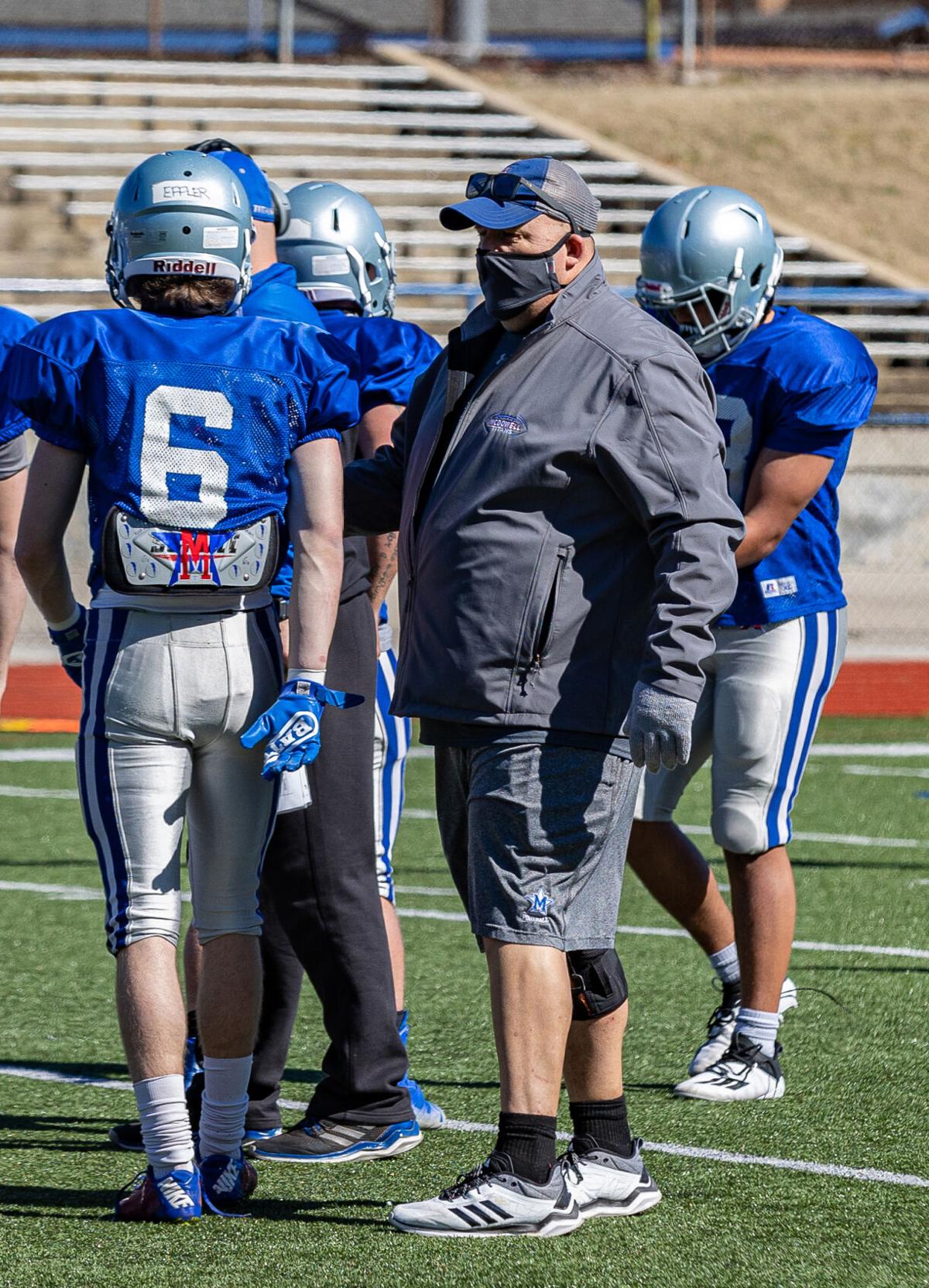 McDowell Titans head coach Darrell Brewer talks to the team between plays during Saturday's scrimmage against Avery. The Titans are set to open the season this Friday on the road at Hickory.

The COVID-19 pandemic – which has claimed nearly 100,000 more American lives in a year than we lost in the entirety of our involvement in World War II – caused the North Carolina High School Athletic Association to postpone the gridiron season from last fall to early spring.

The McDowell Titans kick off the strangest campaign in school history Friday on the road at Hickory (7 p.m.). It’s the first date on a shortened schedule that includes just six games, all of them in the Northwestern 3A/4A Conference.

With COVID restrictions in place and no offseason practices to speak of, the challenges faced by coaching staffs are enormous. But McDowell’s coaches said as difficult as it’s been for them, it’s been even worse for the players.

“I’m just thankful that the boys have been able to get out and do something,” said second-year head coach Darrell Brewer. “As a coach, you always want to win, but right now, the wins and losses don’t seem as important as them getting a chance to get out and be normal again, whatever normal is right now. I just feel for these boys.”

The players have certainly had their share of duress since last taking the field in November, 2019. They were in a virtual limbo over the summer as the NCHSAA tried to pull together a plan to get kids back on the playing field. As a result of constantly changing restrictions, summer workouts were piecemeal at best. Then came fall, and the association announced there would be no football until after the first of the year.

Titans defensive coordinator Keith Styles said the uncertainty has been difficult for players.

“I think if football had progressed on, and we said, ‘look boys, we’re either going to go 100 percent like we’ve always done, or we’re going to shut it completely down,’” said Styles. “I think that’s what we should have done – one or the other. You either do it or don’t do it, and if you think the risk is too much, don’t do it. This stopping and starting is hard on us, but it’s horrible on the kids. It’s way worse on the kids.”

Still, the Titans have had solid participation numbers in the offseason, with between 80 and 90 youngsters in the varsity and jayvee programs. As of earlier this week, there were 41 players on the varsity roster. That fact is a testament to their dedication, according to Brewer.

“They’re in a week and out a week, and some of them are home all the time,” Brewer said. “It’s the craziest thing you ever tried to deal with. But we’ve had good numbers and we’re proud of them. They work hard and have a good attitude. They’ve done everything we’ve asked them to do.”

And they’ve done it while involved in various forms of distance learning. Many of the players are also working in their spare time.

“We’ve got four or five working full-time construction jobs and getting off at 2:30 or 3 so they can come to practice,” said Styles.

Through it all, they’ve managed to get better on the gridiron, and the program could well improve drastically on last season’s 1-9 record. Just one league win would eclipse last year’s 0-6 NWC mark.

“They’ve responded to it amazingly well,” said Brewer. “The kids have been in the offseason since November a year ago. That’s a long offseason.

“I think we’re better. I don’t think we’re as good as we could have been if we could have stayed in that weight room, but if everybody’s following the rules that were laid out there for us, we’re all going through the same thing.”

Not surprisingly, the Titans’ seniors have been instrumental in helping the club navigate uncharted waters.

“We don’t have a lot of seniors, but we’ve got good ones,” said Brewer, whose club had 13 seniors on the roster at the start of the week.

A promising cast of juniors and a handful of sophomores off last year’s 4-5 junior varsity team will also play big roles this spring.

The pieces are in place for the Titans to have a more successful run than they did in fall of ’19. But it could all end in an instant. One positive COVID-19 test shuts down the entire squad for 14 days under rules established by the McDowell County Health Department. Already, the jayvee team has been quarantined once, and won’t play its scheduled opener against Hickory this Thursday.

“There’s going to be a lot of luck involved,” said Brewer. “You could lose them all in a second.”

Until then, there’s work to be done, even if all of it doesn’t pertain to Xs and Os or conditioning.

“I spent about half my morning trying to figure out how to do pregame meals, because we can’t do them like we’ve always done them in the past,” said Brewer. “We can’t take a water cooler. They’ve got to have their own water bottles, so we’re just going to buy individual bottles of water. Even down to how we’re doing meals and water, it’s all flying by the seat of your pants.”

The flight is scheduled to take off Friday. So far, the runways are open.

NOTES: The Titans’ coaching staff will consist of Brewer, Styles, Josh Piercy, Bill Taylor, Allen Tate, Mike Laws, Darren Benfield, Casey Mabry, Brent Rowe and Derrick Calloway. Former assistant Turner Kincaid is leaving to take a job at East Rutherford…Brewer said he appreciates the effort of all the coaches. “It’s taxing on everybody, and if you didn’t have a good staff, you couldn’t do this,” he said…McDowell’s home opener is set for next Friday, March 5, against St. Stephens. Brewer said the team would honor its seniors that night, since there’s no guarantee there will be a home game later in the season. “If we make it through to the end, I would be fine with us mentioning them again,” he added…There are several rules in place of which fans should be aware heading into this unusual season. No fans from visiting teams will be admitted for conference games, and only 100 home fans will be allowed to attend each game. There will be no visiting cheerleaders, bands or dancers allowed. Start times for all NWC games will be 7 p.m. for varsity and 6:30 for jayvees. Tickets are $6…It’s hard to imagine a new coach having as rough a start as Brewer, who suffered a freak quadriceps injury in the 2019 preseason and spent the first month of the season in a wheelchair after having surgery. He said he’s craving a little continuity. “I came in in June (2019), which was way too late, I’m here about a month and get hurt, and then, we get through football season and finally feel like we’ve got things rolling in the weight room, and we did,” Brewer said. “We had them ready to roll in the weight room, making big gains, and they were working hard. Two months later, we’re sent home.

For the second consecutive week, the McDowell Titans relied heavily on their defensive prowess and an opportunistic offense.

The hold teams have on the 2021 high school football season is tenuous at best. One positive COVID-19 test could end a team’s year in a flash.

The McDowell Titans junior varsity football team came away with a 36-6 win against Polk County on Thursday night to open the spring 2021 season.

Titans running back Jacob Pearson tries to avoid a tackle during last Saturday's scrimmage with Avery. McDowell opens the 2021 season Friday night at Hickory. The COVID-shortened season includes just six games for the Titans, all of them Northwestern 3A/4A Conference contests.

McDowell Titans head coach Darrell Brewer talks to the team between plays during Saturday's scrimmage against Avery. The Titans are set to open the season this Friday on the road at Hickory.