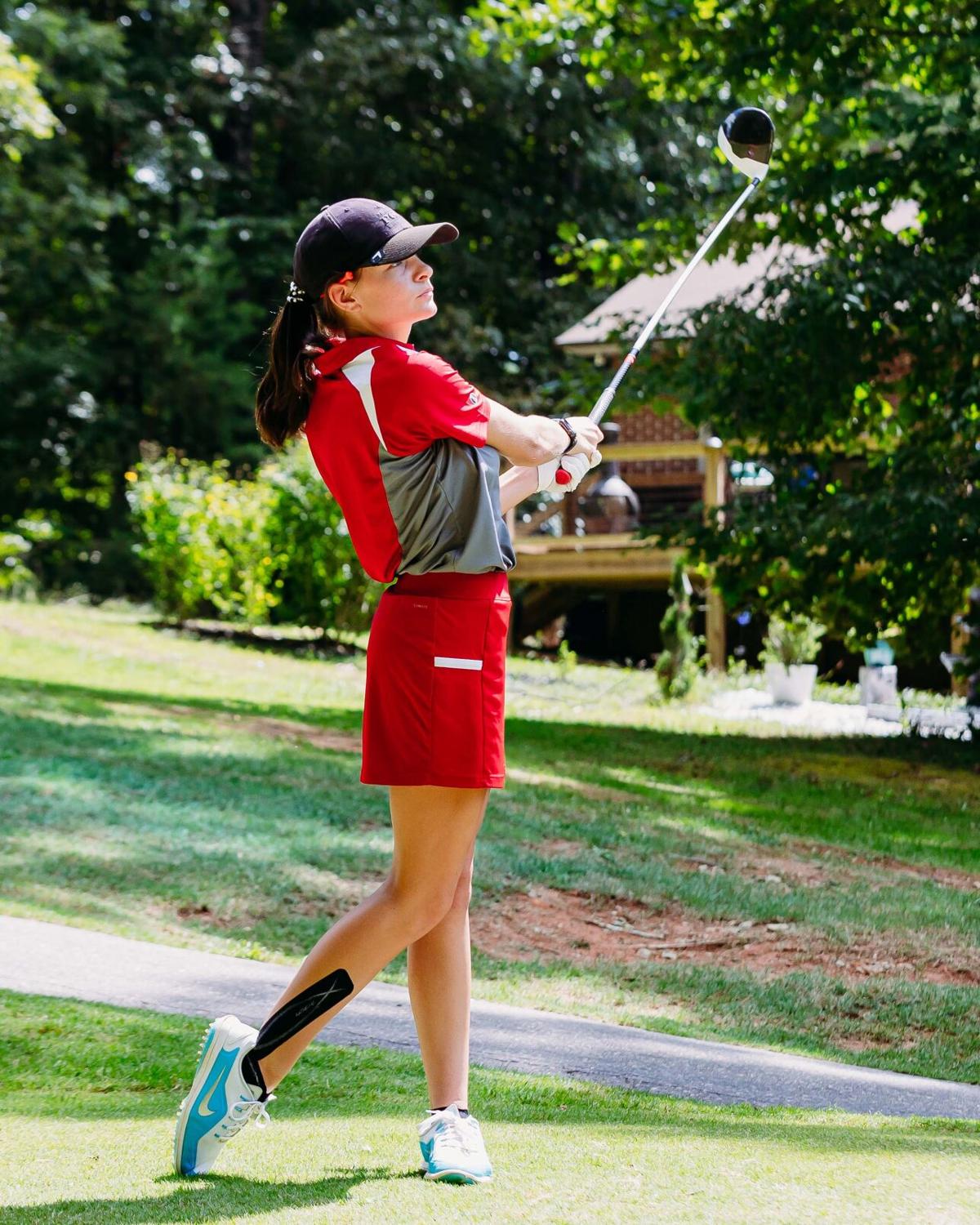 McDowell's Ashton Kirkland watches her drive during a match at Marion Lake Club earlier this season. Kirkland qualified for the West 4A Regional tournament with a sixth-place finish at The Mountain 3A/4A Conference championships. 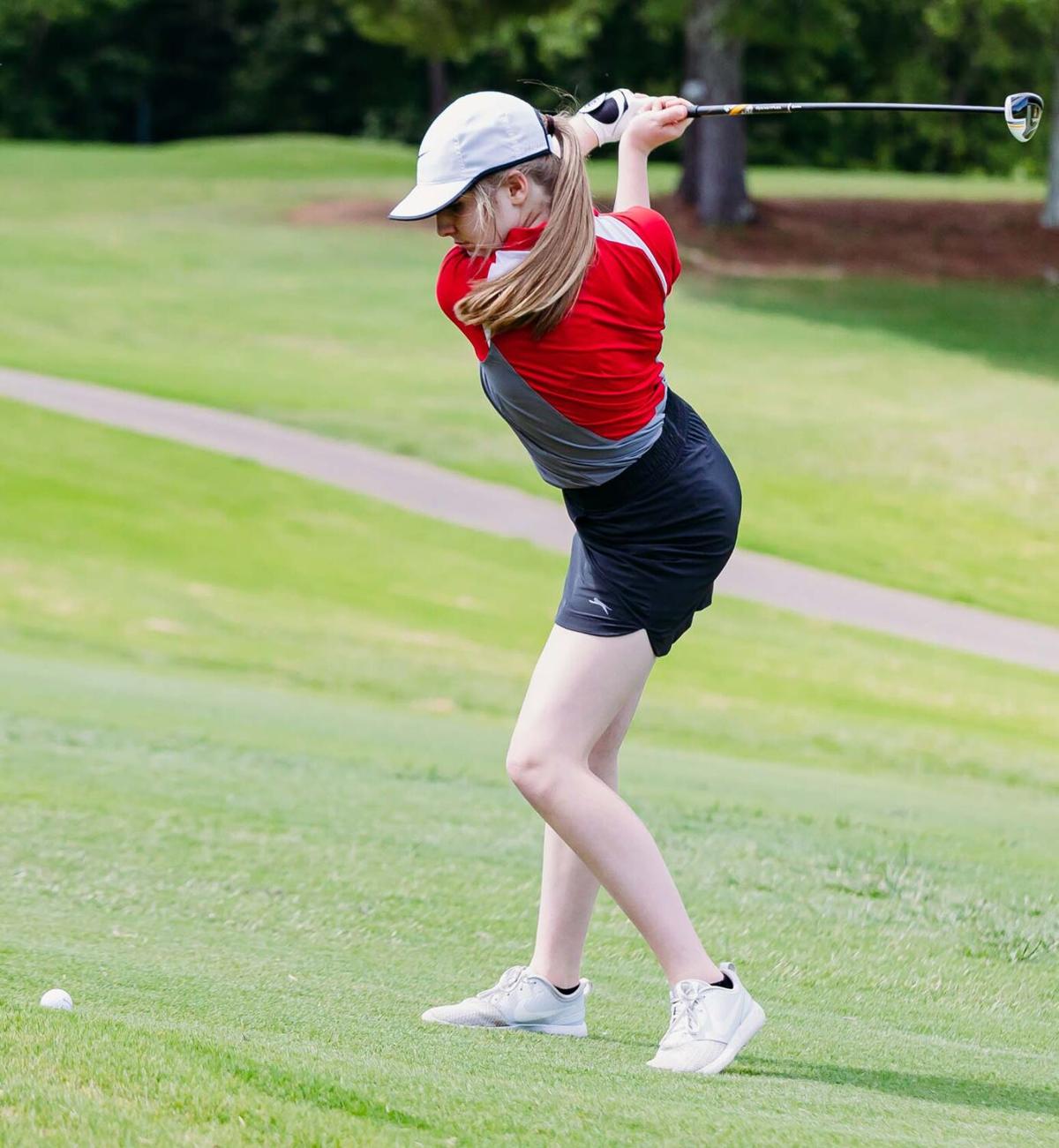 The event started on Monday at Marion Lake Club and finished Tuesday afternoon at Etowah Valley. In the team event, T.C. Roberson claimed the 2021 conference championship and 4A team regional berth with a cumulative score of 374, beating out North Buncombe (378) by just four strokes.

Individually, A.C. Reynolds golfer Gigi Nagy took top honors, shooting a pair of 80s. Bekka Mull (North Buncombe) was second at 164. Mull’s 79 on Monday at Marion Lake Club was the only sub-80 score of the championship.

Roberson’s Brynn Bishop was third with a two-day score of 166.

McDowell’s Ashton Kirkland (200) placed sixth overall in the league and will earn a regional berth in the 4A classification for the third time in her career. Kirkland posted a 92 on Monday followed with a 108 at Etowah the next day.

“We’re excited for Ashton and the opportunity for her to play in a regional for a third time,” said Lady Titans head coach Tony Davis. “She has played steady for us this week and all season.”

Lady Titan golfer Claudia Taylor shot 113 in the first round, followed by a nine-hole score of 60 on Tuesday before disqualifying herself due to sickness.

The rest of the McDowell roster participated in nine holes each day. Rileigh Queen and Laci Patton both finished at 126 for the championship. Kaylin Darveaux participated in just one round, shooting a 51 on Monday and Gracie Patterson did the same, posting a 69 on Tuesday.

The 4A West Regional golf tournament will take place on Tuesday at Stonebridge Golf Club in Monroe.

The Erwin Warriors have been one of The Mountain 3A/4A Conference’s most enigmatic teams all season. But Friday, it was the McDowell Titans wh…

Braves vs Astros: A World Series six decades in the making

Sure, many pro baseball fans might not be thrilled to see either team make the series. Read on to find out why. But Atlanta toppled the 106-win Los Angeles Dodgers to win the National League pennant. See the highlights.

Stonebridge Golf Club in Monroe was the home of the 4A West Regional in Women’s Golf on Tuesday afternoon, and McDowell High golfer Ashton Kir…

It wasn’t long after Winston-Salem State’s final home football game Saturday that the guardrails used for NASCAR racing at Bowman Gray Stadium went back up.

McDowell's Ashton Kirkland watches her drive during a match at Marion Lake Club earlier this season. Kirkland qualified for the West 4A Regional tournament with a sixth-place finish at The Mountain 3A/4A Conference championships.