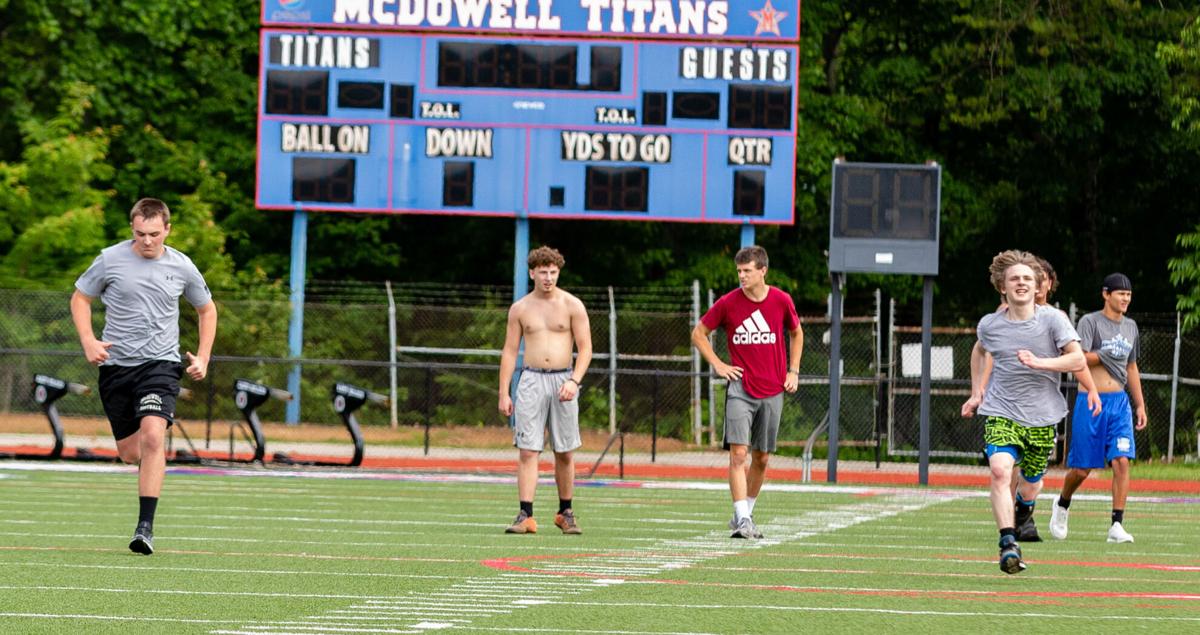 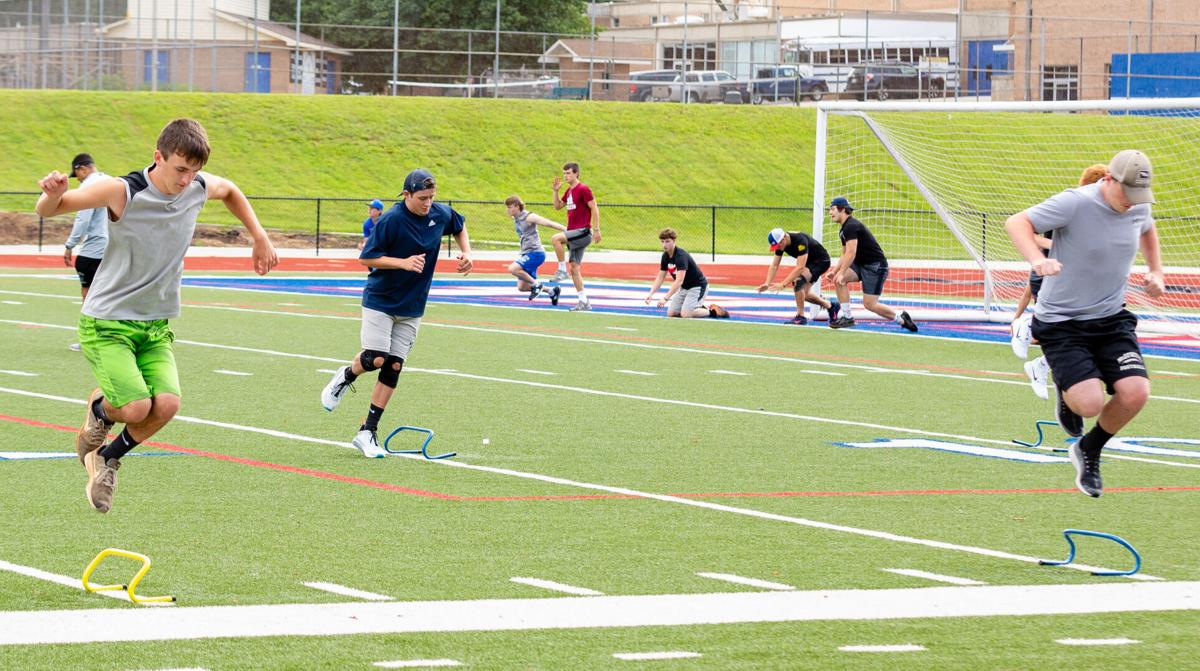 McDowell Titan football players keep their distance from one another while they work on conditioning. The NCHSAA is easing restrictions on what teams may do as part of the state's second phase of reopening during the COVID-19 pandemic.

The North Carolina High School Athletic Association has voted on and passed a plan for Phase 2 of its return to sports.

The measure approved by a Board of Directors vote last week will allow member schools to relax a few of the regulations compared to Phase 1, which is currently in place. Phase 2 will go into effect on Monday, Aug. 3 and will last until further notice.

The main change will allow teams the ability to share equipment during a workout session. For example, football teams will be allowed to throw and catch the ball or use a blocking sled within a pod of athletes. Each piece of equipment will have to undergo proper sanitation between each pod and after each workout session.

Other than the expanded use of equipment, Phase 2 will feature the same protocols as the first phase, including social distancing, the use of face coverings and pre-screenings prior to workouts.

Also, the number of athletes and coaches allowed in a practice session will remain the same, with no more than 25 outdoors and 10 indoors.

“Going to Phase 2 will open up some additional things that we can do as a coaching staff with the kids,” said McDowell head football coach Darrell Brewer. “It’s a step forward which is definitely a good thing.”

Coach Brewer and his staff will organize a plan this week to implement when players return next week. During Phase 1, the McDowell football program has been holding sessions twice a week in groups of up to 25 and working exclusively on conditioning. The program has been implementing that schedule for about the past month but took a break this week.

“During this first month in Phase 1, we essentially have been doing sprints and running stadiums all in one group of between 20 and 25,” Brewer said. “Now, with the addition of using equipment, those 25 will be split up into even smaller pods and everyone out here, including our staff, will need to be more efficient time-wise doing exercises and then cleaning between pods.”

The start of the fall sports season was recently moved from its usual Aug. 1 date to Sept. 1 by the NCHSAA, and could be adjusted even further depending on the trends of COVID-19 statistics statewide during the next month. Until then all member schools will be under Phase 2 of athletic workouts. NCHSAA has designated the week of Aug. 17 as a dead period for athletics to allow students to become acclimated to the start of the 2020-21 school year.

Prior to the pandemic, McDowell’s season opener was scheduled for Aug. 21 at home against R-S Central.

NEBO — The third time was definitely the charm for Noah Bumgarner, as the talented young golfer claimed the 2020 Al Farley Memorial McDowell C…

TORONTO (AP) — The state of Pennsylvania won't allow the Toronto Blue Jays to play at PNC Park in Pittsburgh amid the coronavirus pandemic, he…

The COVID-19 pandemic has forced the cancellation of sporting events at a maniacal pace since the middle of March.

The powerhouse Southeastern Conference reconfigured its schedule Thursday to include only league games in 2020, a pandemic-forced decision tha…

MIAMI (AP) — The Miami Marlins scrambled for roster replacements as they coped with a coronavirus outbreak. The New York Yankees had an unscheduled day off in Philadelphia while the home team underwent COVID-19 tests. The Baltimore Orioles were flying home from Miami without playing a game. The Chicago White Sox manager was sidelined by a cough.

McDowell Titan football players keep their distance from one another while they work on conditioning. The NCHSAA is easing restrictions on what teams may do as part of the state's second phase of reopening during the COVID-19 pandemic.