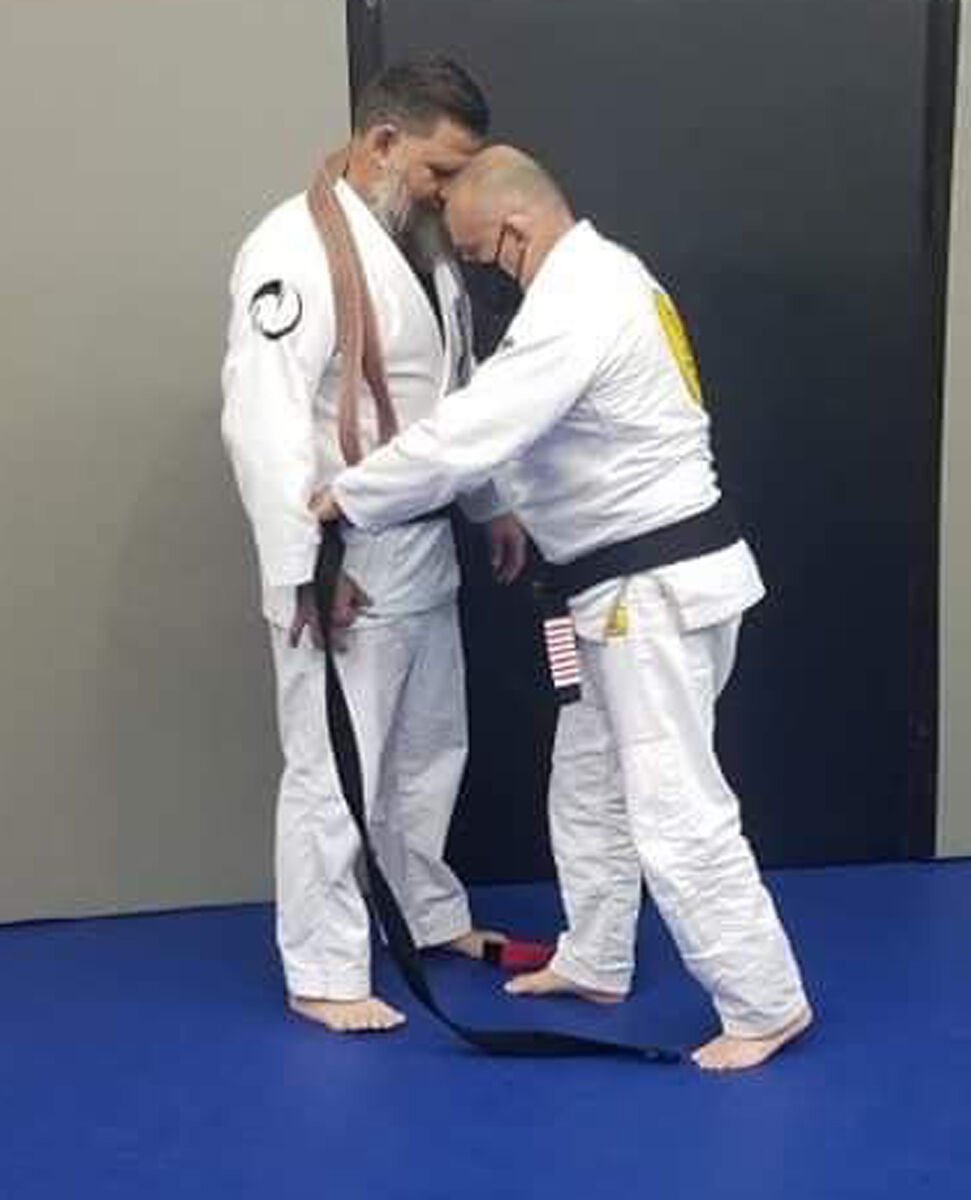 The road to a black belt in Brazilian Jiu Jitsu is not exactly what you’d call well-traveled.

In fact, one of the martial art’s most skilled local practitioners said it’s a path almost no one finishes.

“It’s something like .5 or 1% of people who start training in Brazilian Jiu Jitsu ever receive a black belt,” said Chris Marsh, who owns and operates Titan BJJ at the Larry D. Miller Complex in downtown Marion. “It’s a tough and brutal sport.”

Now, you can count Marsh as one of those who finished the trail.

Marsh recently earned his black belt in the sport. His mentor, Professor Mario Aiello – a sixth-degree black belt who learned Brazilina Jiu Jitsu directly from the legendary Gracie family – flew in from California to present Marsh with his new rank.

It was a huge moment for the former McDowell High athlete and career law enforcement officer.

“It meant a lot,” said Marsh. “I’ve been blessed beyond what my old soul deserves.”

Marsh began learning the sport 13 years ago, and quickly became hooked. He initially trained in Forest City with some N.C. State Trooper friends, but eventually opened a BJJ gym in a barn at his old residence in Nebo. Two years ago, Marsh moved the school into the Miller Complex.

“COVID hit us pretty hard,” he said. “We actually had zero cases in the school, but it still hurt us. As soon as we could, we brought the adult classes back in and then what we call the ‘big kids,’ the 9-12-year-olds. We haven’t even thought about bringing the little kids (ages 3-8) back yet, but we will eventually. We’re just trying to recover from COVID.”

Marsh said there are currently between 25-30 adults and 15 ‘big kids’ in the school, but expects numbers to climb now that more folks are being vaccinated against the virus.

MIAMI GARDENS, Fla. (AP) — A month before he returns to the ring at age 44 for an exhibition bout, Floyd Mayweather wound up in a brawl.

Anytime you battle a team the caliber of the South Caldwell Spartans the margin of error is razor thin.

Catching a bomb from Tom Brady wouldn’t be unheard of for Rob Gronkowski, but the veteran tight end broke another record over the weekend when he pulled in a pass thrown from a helicopter 600 feet overhead in Arizona.

Titans bounce back to beat Mitchell 8-1

Sometimes the best thing to do after a tough loss is to get back on the field as soon as possible. The McDowell Titans were able to do that Th…

Titans open wrestling season with a pair of victories

The McDowell Titans got the 2021 wrestling season off to a good start Friday, taking lopsided wins against Wilkes Central and West Caldwell in…

Stout pitching: Revis solid on the mound in Titans' 4-1 win over Alexander Central

SAN FRANCISCO (AP) — Greeted by more “M-V-P!” chants, Stephen Curry dazzled again in one of the most dominant stretches of his career.