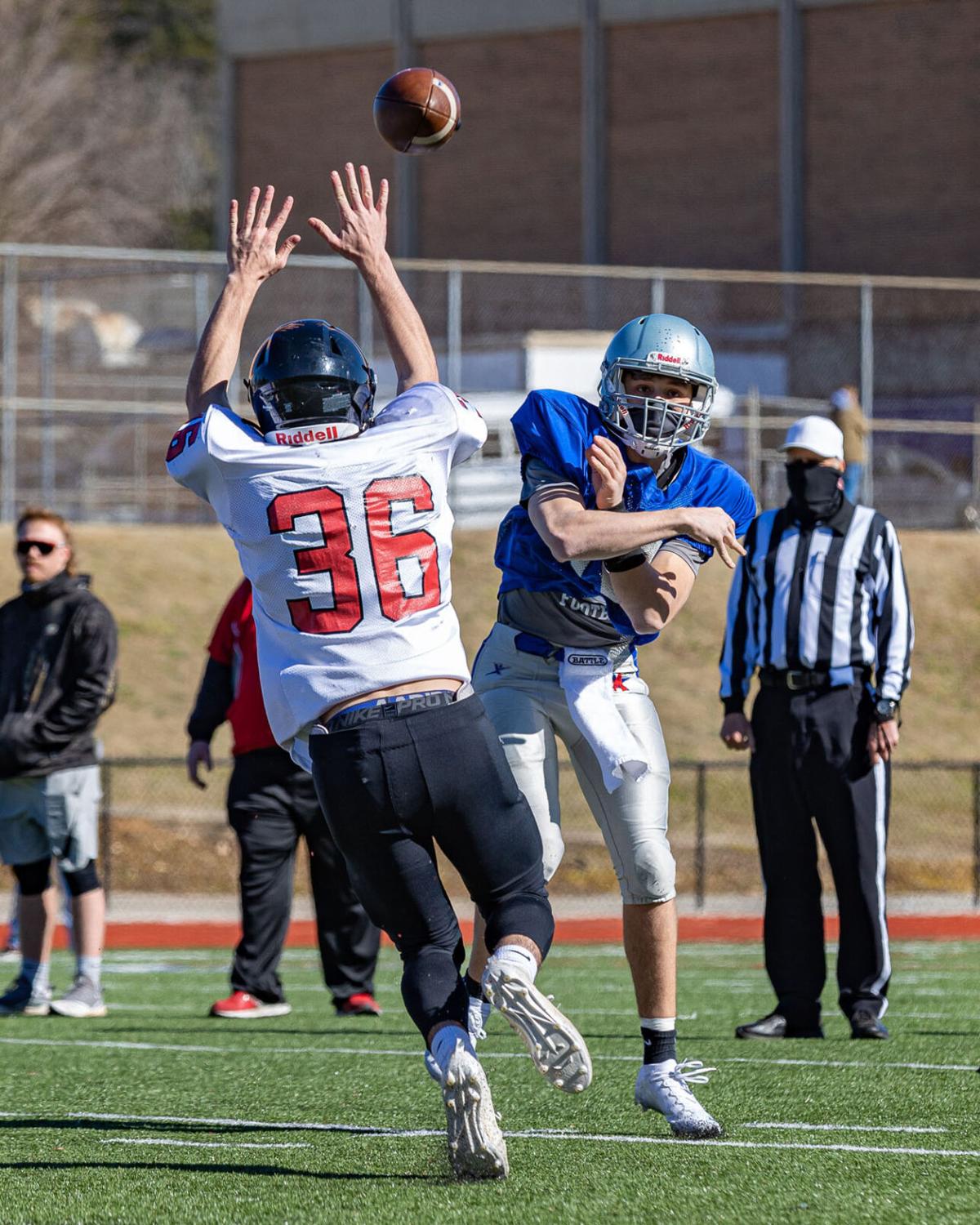 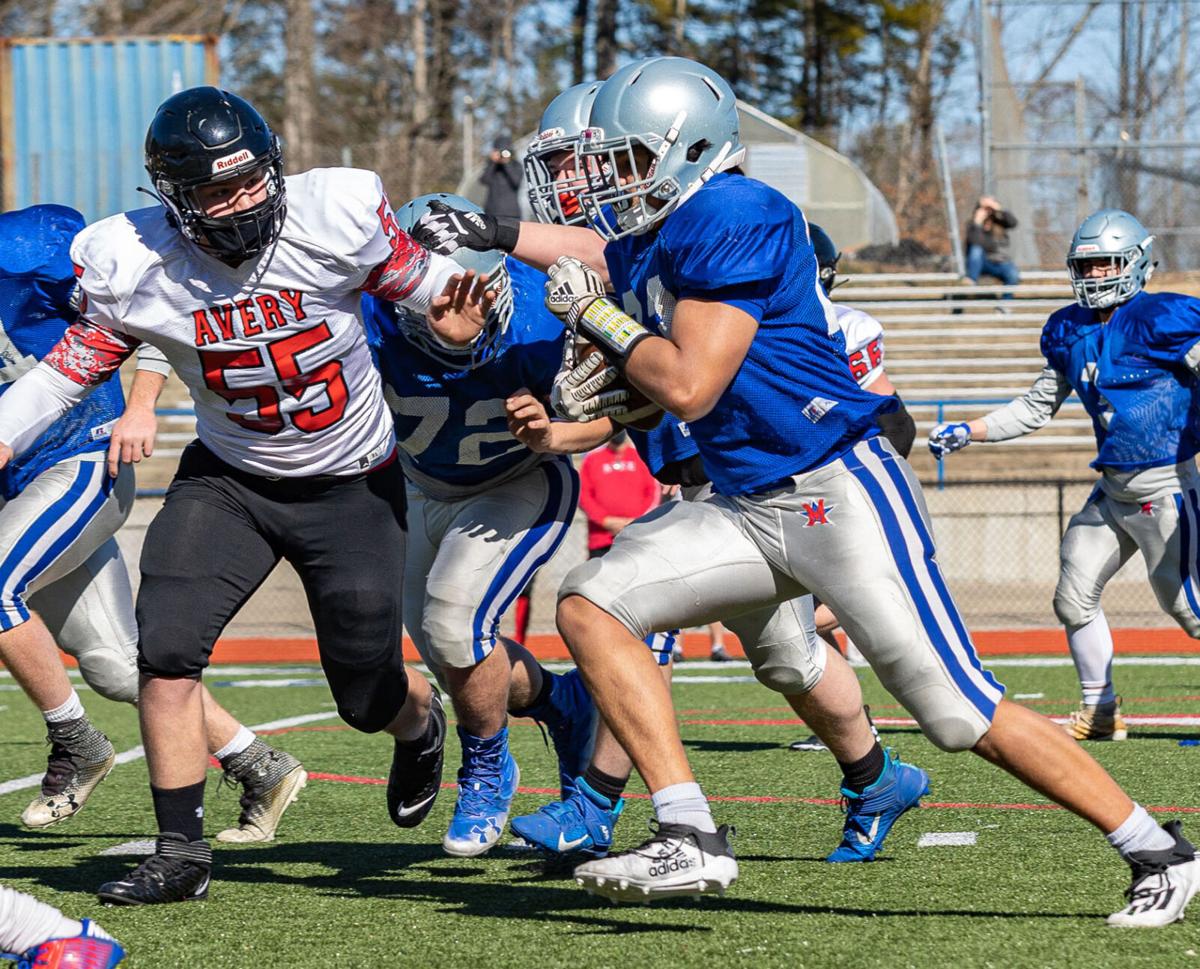 Titans running back Helon Alvarado runs the football during the scrimmage against Avery. 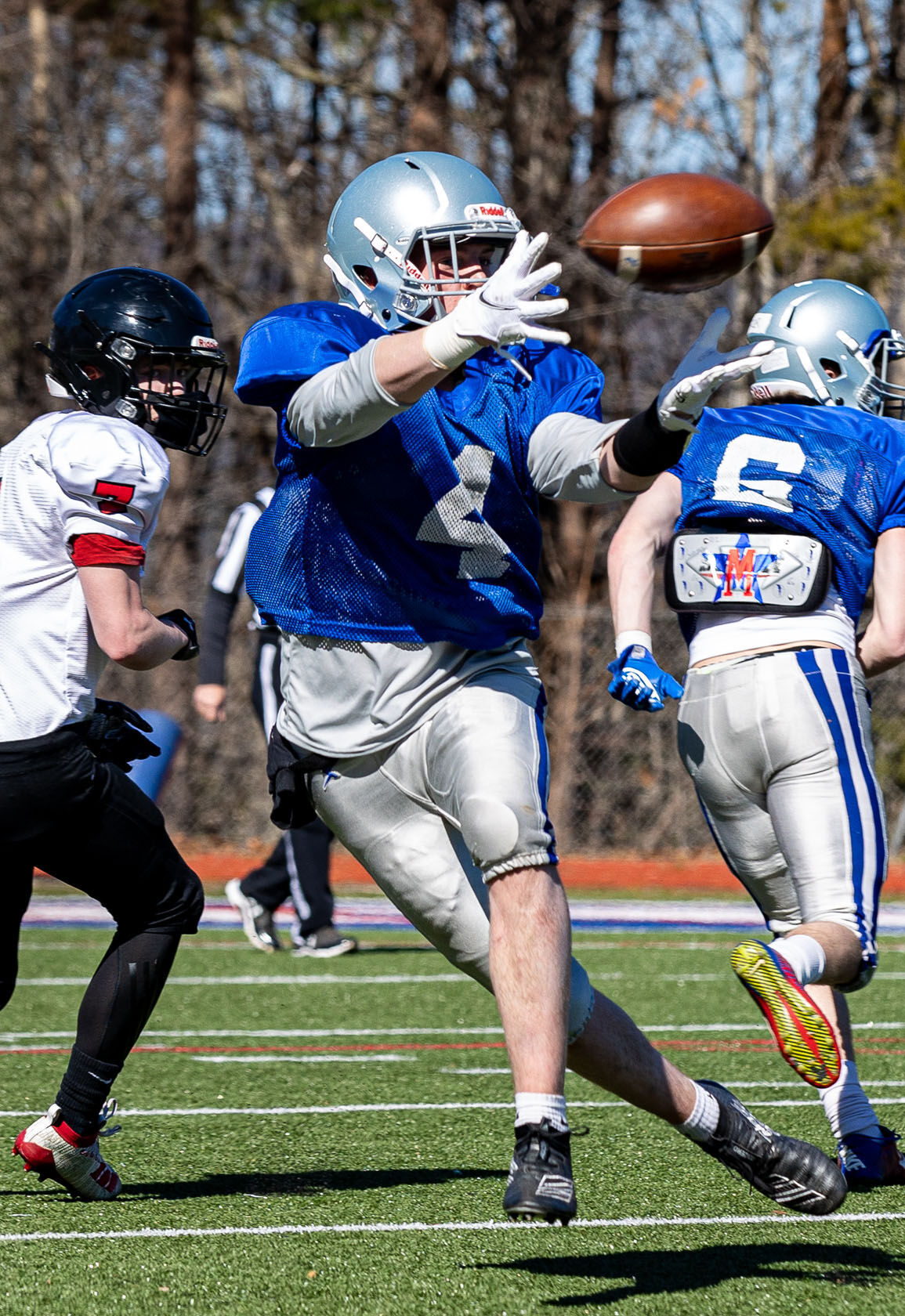 Titans running back Jacob Pearson catches a pass out of the backfield.

The Titans, in less than two months of summer 2019, tried to convert its offense from the spread over to a multiple wing-T look. Needless to say, that was challenging task

Fast-forward to nearly 18 months later and plenty of reps in training, and the players have a much clearer grasp of the wing-T and how to use it to their advantage. With the 2021 season now a matter of days away, the Titans are hoping to put up much better results on the board.

McDowell, who went 1-9 in 2019 and averaged just 217 yards offensively per game, knows that increased production on the offensive side of the ball can ultimately yield better results in the winner’s column, and with a significant number of returning players back, the feeling going into spring 2021 is good.

“You know these kids have been through a lot going back to last season and then dealing with the pandemic and how this year has changed so much from a traditional football schedule standpoint,” said offensive coordinator Mike Laws. “But to credit the kids, they have worked hard and they are eager to produce better results. We have the capability of not only more production, but having a more balanced offense. We struggled throwing the ball last year and that just made us unbalanced as a team.”

Some of that balance will be dictated by what happens up front this year. In 2019 the Titans sent a very green, inexperienced unit to the trenches. But after learning on the go, the hope is for a more seasoned group in the spring of 2021.

“With the exception of a break we had in January, this group has been working steady going back through the fall, learning the plays and their assignments,” said offensive line coach Darren Benfield. “I’m optimistic that we will be able to get some things done up front.”

The offensive line will feature as many as three returning faces.

The right side of the line will consist of James Day (5-11, 240) and right tackle is still in flux with current juniors Jake Marsh (6-2, 215) and Jaret Maynor in competition for that spot.

Junior Riley Preswood at this time will take most of the snaps at center. Coach Benfield noted that he has several reserves that can also see time including Michael Ellis, Trey Keasler, Jalen Sexton, Miguel Mercado and Christopher Byrd.

The most returning experience is in the McDowell backfield as Laws will rely on a committee of ballcarriers in the wing-T.

Quantavian Moore, with 841 yards and six touchdowns, was the team’s leading rusher in 2019 and will be back for his senior campaign. While there is no feature back in the offense, Moore will be one of the first options called on, and, if healthy, could have a breakout season.

Joining him in the backfield will be 170-pound senior Jacob Pearson. With some speed and good hands, Pearson brings a do-it-all presence in the backfield. He carried the ball just 47 times a season ago but a lot of that came later in the year.

A third option for the Titans in spring 2021 will come from sophomore Helon Alvarado. Last year as a freshman on the jayvees, Alvarado showed flashes of his raw talent. Over the past year he has worked to become stronger physically and at 6-foot and 215 pounds, Alvarado will be looked upon to be the north-south runner in the backfield.

Jesse Barrier will get reps as the team’s fullback and will be seen a lot in the team’s power running formations.

Sophomore Blake Boswell and junior Ethan Hensley will provide depth in the backfield for the Titans this season. Boswell’s status, however, is uncertain after suffering a leg injury in last Saturday’s scrimmage against Avery.

McDowell’s passing game looks to be the area that could see substantial improvement. Last year, it was a struggle to get the ball down the field for various reasons, as McDowell averaged just over 60 yards a game and had only four passing scores the entire season.

A lot of the snaps were taken by current senior Riley Moore in 2019, but this year, junior Gabe Marsh will step in as the primary signal caller. Marsh can also be categorized as one of the more improved players from a year ago, and that is going to allow Moore to slide over to receiver to give McDowell a chance to put the most athletes possible on the field.

But with that said, the coaching staff wants to keep multiple players on the same page during practice due to the nature of rosters with the current COVID-19 pandemic.

“You’re only a call away from finding out someone is done for an extended period of time,” said quarterbacks coach Brent Rowe. “For me as a position coach, and I would assume for coaching staffs everywhere, one of the big dilemmas this season is having multiple people ready to step in. Gabe has come in and has done a lot over the past year to become a better quarterback. That has allowed us to move Riley over to receiver to give us more athletes on the field, but at the same time Riley knows he could be back under center at a moment’s notice.”

Moore himself is an example of how things can be in a fluid state due to the pandemic. The senior has been in quarantine recently due to the boys’ basketball shutdown two weeks ago. Moore, as of press time, is expected to return and be active for this Friday’s opener at Hickory.

Rowe and Laws have also incorporated receiver/kicker Seth Baird into the quarterback position some in the preseason just to give the team another option should something arise. Sophomore Ricky Carr, a freshman jayvee quarterback in 2019, will dress on Friday nights and be available on the offensive side of the ball if necessary.

Marsh will have several options to throw the ball to this season, including Moore and Baird. Other receivers on the roster will include Bryson Effler, Roby Greer, Jeryah Cash, Luke Roberts and Andy Massengale. Seniors Morgan Burnette and Danielle Rector round out the receiving corps.

Sophomore Jeremiah Ellis and junior Grayson Blackwelder will be asked to line up at tight end. Ellis, who has good hands and athletic ability, could be looked upon to replace the productivity of former tight end Richard Handy (23 receptions, 283 yards, 2TDs), who graduated.

Overall, the feeling is that the spring 2021 Titan offense is deeper and more experienced, particularly with the mindset of the ball-control nature of the wing-T, and will be able to do a lot more with a year-plus under the belt.

A look at the 2021 McDowell defense

Rising to the challenge: Titans hoping for reversal of fortunes on defense

The football teams in the Northwestern 3A/4A Conference run a bewildering variety of offenses – everything from run-based, wing-T attacks to t…

Absolutely nothing has been normal about the 2021 high school basketball season in North Carolina, and for the McDowell Titans, that includes …

Titans running back Helon Alvarado runs the football during the scrimmage against Avery.

Titans running back Jacob Pearson catches a pass out of the backfield.