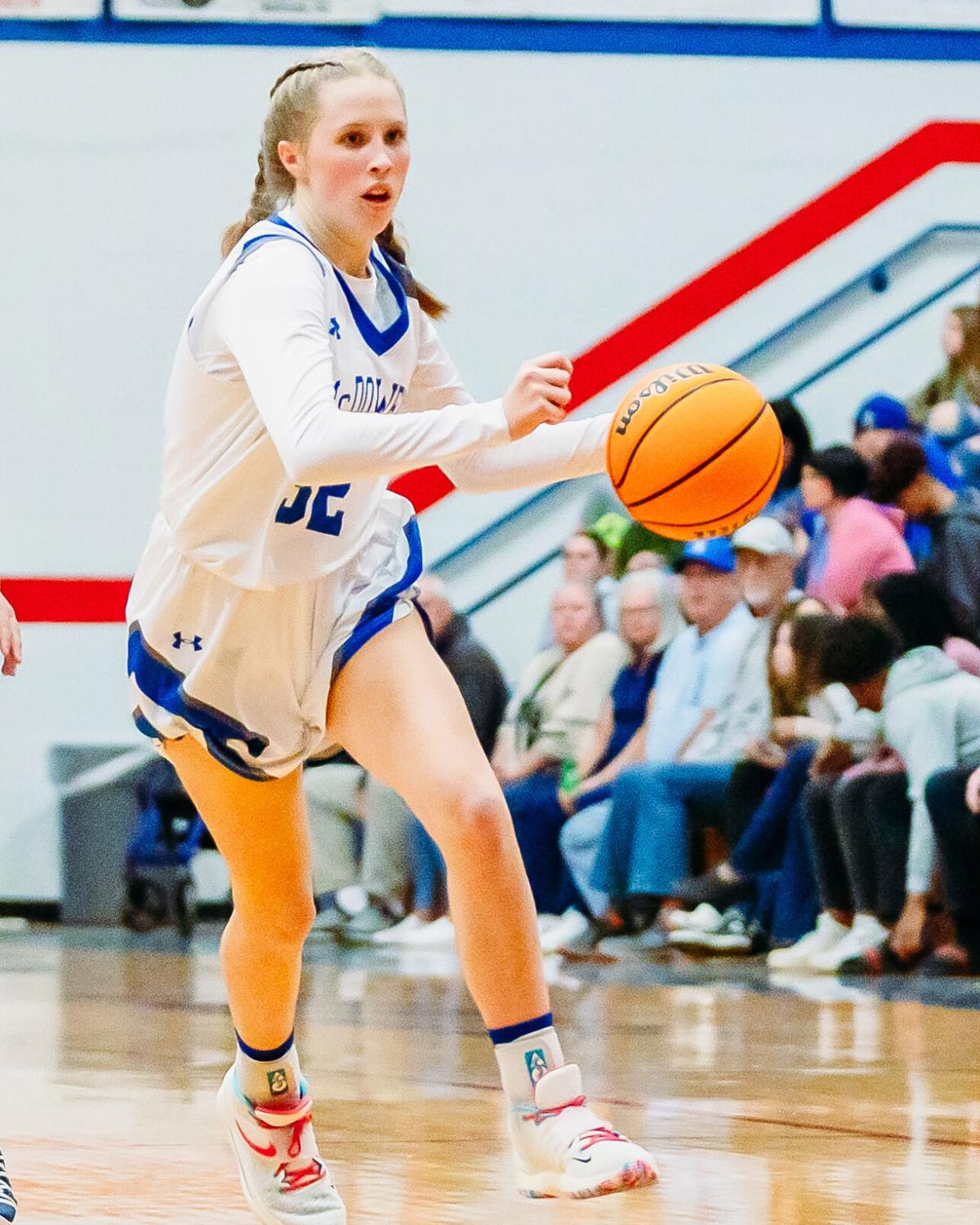 McDowell's Peyton McPeters pushes the ball upcourt. McPeters' 3-pointer gave the Lady Titans the lead for good in the closing seconds of their win over Mitchell on Wednesday night. The Lady Titans trailed by as many as 12 in the fourth quarter before rallying. 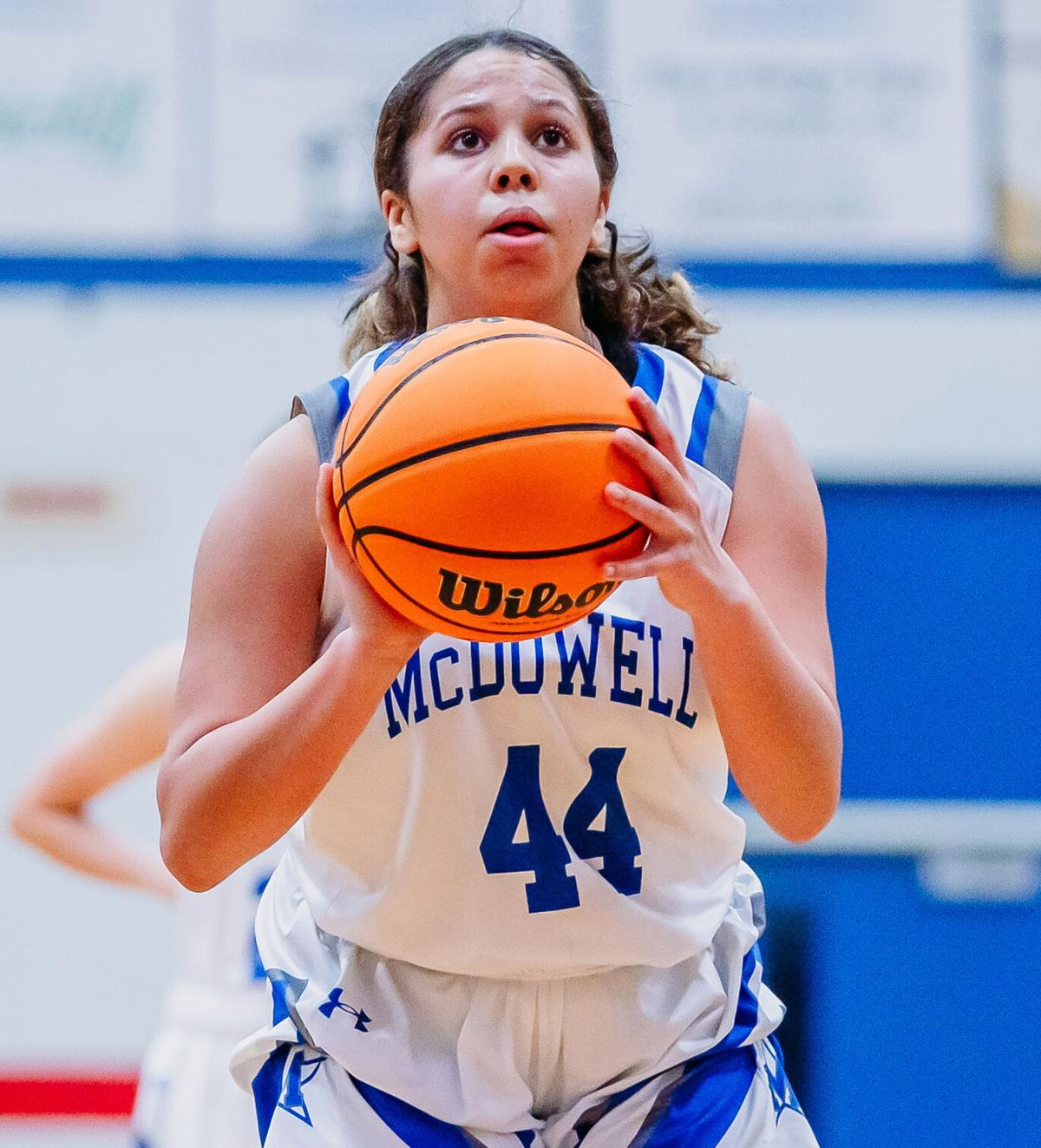 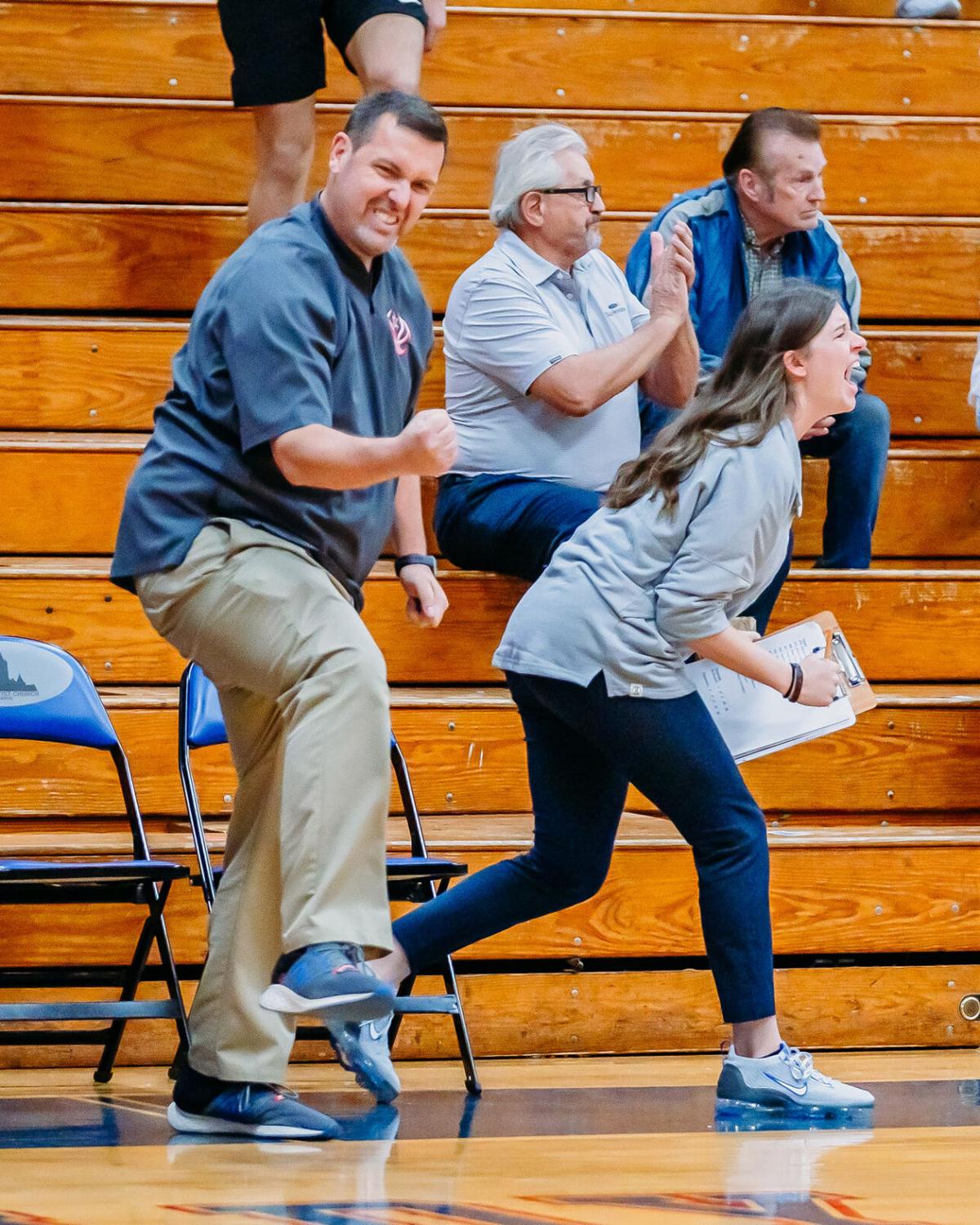 Lady Titans head coach Zack McCartha and assistant coach Cheyenne Matson react during a recent game. McDowell defeated Mitchell on Wednesday. For McCartha, it was the first game against the team he coached for five seasons prior to taking the McDowell job last year.

While it may not go down as the greatest game in McDowell Lady Titan basketball history, Wednesday night featured a lot of emotion inside of Titan Gymnasium, something reminiscent of the program’s history.

McDowell, with the help of a late, fourth-quarter comeback, toppled the Mitchell High Lady Mountaineers 47-45 in non-conference play. The Lady Titans had trailed by as many as a dozen in the final quarter.

The win was emotional for a variety of reasons. For starters, it snapped a four-game losing streak and put the Lady Titans at 5-7 on the season.

Second, the manner in which the victory was achieved was a breakthrough for this young McDowell squad who has had some close games against solid competition in recent weeks and is growing up as a by-product.

Lastly, for head coach Zack McCartha, it was his first encounter on the hardwood against his former team. McCartha was head coach at Mitchell for five seasons before returning down the mountain when he took over the McDowell job last summer.

Wednesday night’s game had all the storylines a scriptwriter would ask for.

Mitchell led for all but about two minutes of game time on Wednesday and was up as many as 12 points in the fourth quarter, 41-29 when Chandra Jenkins made the front end of a one-and-bonus free throw with exactly five minutes left on the clock.

That was when the Lady Titans kicked it into overdrive, going on an 18-4 run the rest of the way and stealing what, for most of the night, was looking like a fifth straight loss. The comeback also came after starting freshman guard Kensly Stewart fouled out in the final three minutes of play.

“These kids just keep fighting,” said McCartha. “I know I say that a lot, but this group never gives up and that’s what I love about them. They just keep digging and found a way there in the end to win. I told the girls after the game that I wanted to win for them, it’s a reward for the hard work they have put in.”

There was no better example of the pluckiness McCartha mentioned than the play of junior wing Peyton McPeters. After going scoreless for three periods, McPeters scored all of her seven points in the fourth-quarter rally.

McPeters, after being fouled on a transition play, tied the game 43-43 with two shots from the line with 44 seconds left.

Then, after forcing a stop on the defensive end, the Lady Titans moved the ball around in the half court. Tayla Carson, at the top of the wing after corralling a rebound, quickly got the ball over to McPeters, who drained a 3 from the left wing, giving McDowell a 46-43 lead with 23 seconds to go.

“I was really nervous in that situation because I had not hit any shots earlier in the game,” said McPeters. “When I hit the shot, it was like lifting the whole world off my shoulders.”

Reagan Sparks answered for Mitchell with two free throws, making it a one-point game with 19 seconds left. McDowell freshman Sage Young was then fouled with 16 seconds left and made the back end of a two-shot bonus at the line for the final score.

The Lady Mountaineers’ had one last opportunity in the waning seconds. Marybeth Woody’s jumper from the left corner fell short and into the hands of Carson, who quickly passed the ball into McPeters’ hands, allowing time to expire and sending the players into a celebration on the floor.

McPeters notes the improvement that this team has shown in recent weeks.

“I definitely think we are getting better as a team every single day, we’re growing up,” she said. “We get a lot of positive reinforcement out there from coach and each other.”

Neither team shot the ball particularly well. McDowell scored at just a 29% clip (17 of 57) from the field, but it got progressively better as the game went on, eclipsing the 40% mark in the fourth quarter. What kept the Lady Titans in the game were the 28 turnovers by the Lady Mountaineers.

Carson led the team in scoring with 12 points and three steals. Stewart (3 rebounds, 2 assists) had 10 points before fouling out. Abby McMahan netted six points off the bench. Abby Wyatt chipped in with four points and Emma England had two points.

Sparks led Mitchell with 15 points and Savannah Banks added 10 first-half points, none after the break.

Is The MLB HOF voting outdated?

Super Bowl LVI is almost here! A look back at some of the most popular ads of all time

Super Bowl LVI is almost here! A look back at some of the most popular ads of all time

A guide to the upcoming 2022 Beijing Olympic Winter Games

A guide to the upcoming 2022 Beijing Olympic Winter Games

Tall, athletic Rockets too much for Titans

The A.C. Reynolds Rockets had too much size, too much athleticism and too much Rakease Passmore.

BELLEVUE, Wash. (AP) — Seattle Seahawks backup quarterback Geno Smith's arrest on suspicion of driving under the influence came after the Washington State Patrol pulled him over for going 96 mph in a 60 mph zone and driving erratically across several lanes of traffic, according to an arrest report released Tuesday.

PHILADELPHIA (AP) — Dak Prescott ran into Dallas' locker room with a message for any NFC team he'll play next week in the playoffs.

The recent winter weather has forced a slew of postponement for the McDowell High basketball program. Here are some action shots from recent g…

It was a tough afternoon for McDowell High School’s two junior varsity basketball teams on Monday as they lost a pair of contests to A.C. Reynolds.

The McDowell Lady Titans have staged their share of comeback efforts this season, but comebacks can’t happen if you can’t put the ball in the basket.

Watch out for the tricks that Patrick Mahomes & Co. have up their sleeves Sunday. Mark Gaughan has advice for the Buffalo defense in a playoff edition of PlayAction.

In a newspaper interview, John Stockton claimed without evidence that more than 100 professional athletes have died after receiving the COVID-19 vaccine.

McDowell's Peyton McPeters pushes the ball upcourt. McPeters' 3-pointer gave the Lady Titans the lead for good in the closing seconds of their win over Mitchell on Wednesday night. The Lady Titans trailed by as many as 12 in the fourth quarter before rallying.

Lady Titans head coach Zack McCartha and assistant coach Cheyenne Matson react during a recent game. McDowell defeated Mitchell on Wednesday. For McCartha, it was the first game against the team he coached for five seasons prior to taking the McDowell job last year.