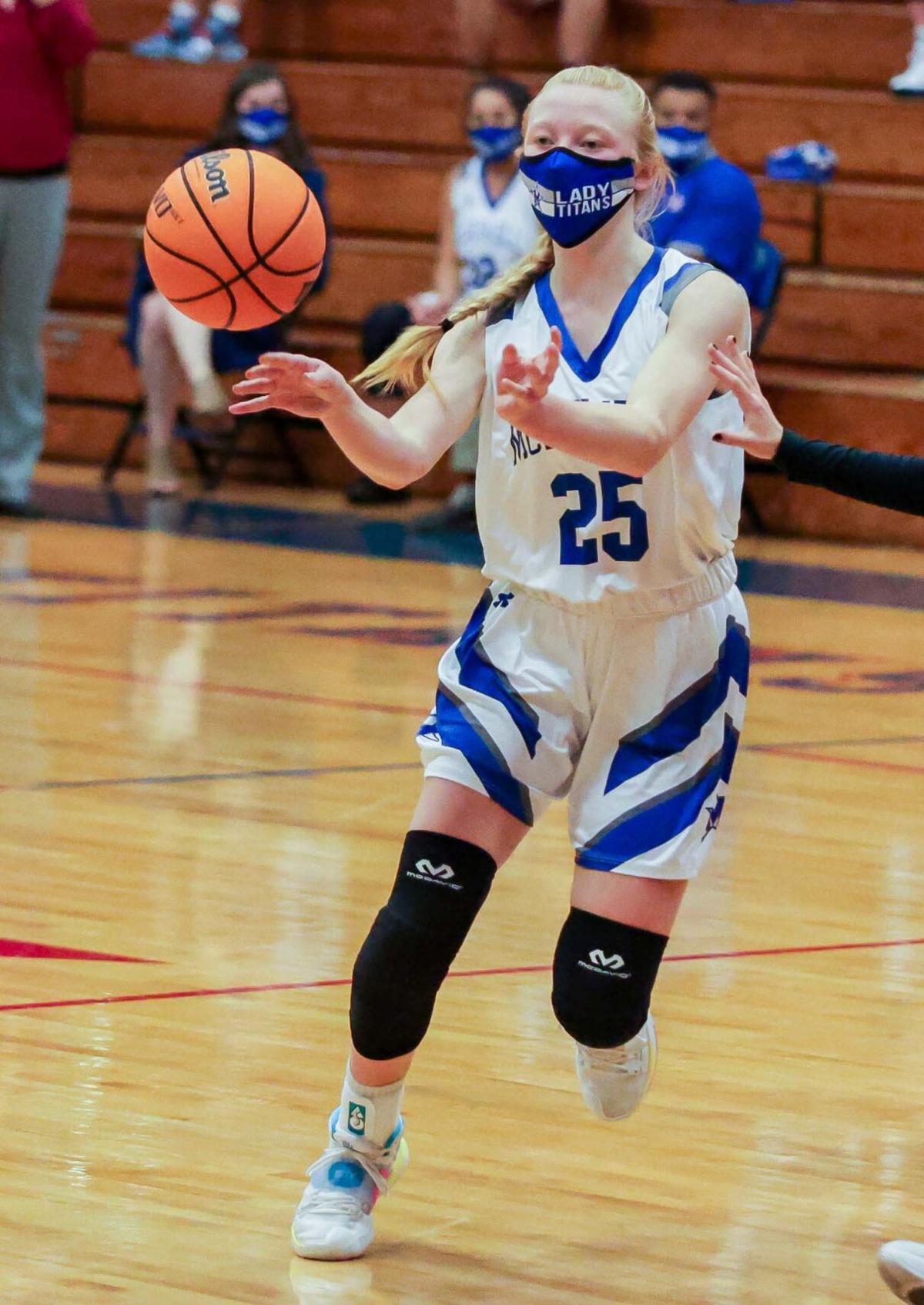 McDowell's Daisy Rice makes a pass during a recent game. The Lady Titans defeated Watauga on the road Wednesday and travel to Alexander Central tonight. 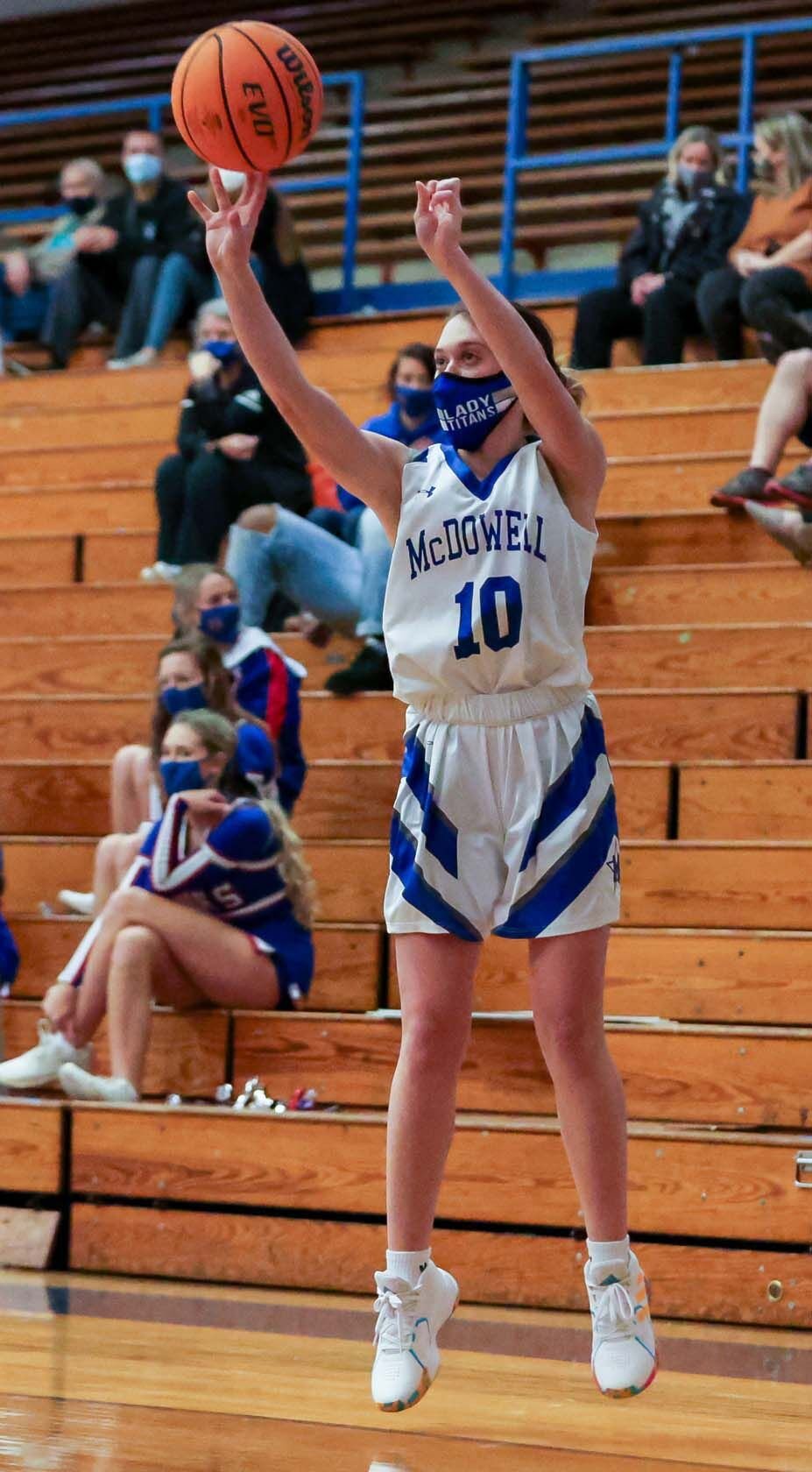 McDowell's Payton Koone makes a jumper during a recent game.

With the help of three players scoring in double figures, the McDowell Lady Titans earned a 61-50 win on the road at Watauga on Wednesday night.

The victory improves McDowell to 2-1 on the young season and gives them an important win on the first road trip of the season.

The Lady Titans have had a lot of struggles inside of Lentz-Eggers Gymnasium in recent times, having lost up there the past four seasons, each time by double figures.

The last road win in Boone before Wednesday night was in Dec. 2012, when the two battled in a nonconference game. Based on the first set of projections on the next realignment slated for the fall of this year, this could possibly be McDowell’s last visit to Boone, at least as a conference member for the foreseeable future.

The focus offensively was very much the same as it was a few nights ago in the St. Stephens win, and that was to get the ball inside to Naliyah Boyce. And for the second consecutive game, the senior did not disappoint as she led all scorers in the game with 24 points, 14 rebounds, three assists and a pair of blocks. Boyce’s 16 second-half points helped spur the momentum in McDowell’s favor.

Boyce’s production also helped open opportunities for other players on the floor.

Madi Smith collected a season-high 16 points to go with six rebounds and six steals. Smith, on multiple occasions, was the recipient of easy baskets when the Lady Pioneers doubled down on Boyce in the paint. The 6-foot center, on a couple of her assists, would catch the ball in the high post and find Smith cutting backdoor for a layup.

Senior wing Daisy Rice was the third player in double figures with 15 points, along with seven rebounds and a pair of assists.

McDowell trailed for most of the second quarter, but Rice nailed a 3-pointer in the final 10 seconds of the half to trim the Watauga lead to 24-22 going into the break.

That long-range shot turned into the catalyst for the Lady Titans’ second half.

McDowell regained the lead for good on a conventional three-point play by Smith 22 seconds into the third. The surge ultimately led to a 40-35 Lady Titan lead after three quarters and then a 10-3 run over three minutes into the fourth quarter expanded the McDowell lead into double figures for the first time all night.

A transition layup by Rice with 7:39 left was then followed later with another score by Smith and then six consecutive points scored inside by Boyce to create the extra breathing room.

Two free throws by Boyce made it 50-38 with 4:41 to go. Watauga never got any closer than five points the rest of the way.

The Lady Pioneers had a pair in double figures on Wednesday. Junior forward Brelyn Sturgill finished with 15 points, and freshman guard Charlotte Torgerson had 11 points.

Turning up the heat: Titans find their range, shoot down Spartans

This much has become apparent through the first third of the Northwestern 3A/4A Conference basketball season: Whoever gets hot on a given nigh…

TAYLORSVILLE – When the scoring is  in the 60s or higher, the McDowell Titans are usually on the upper end of the ledger.

Lady Titan JVs too much for South Caldwell

The McDowell Lady Titans, in their 2021 home debut, used a strong second half to beat the South Caldwell Lady Spartans 50-31.

At various points in the 2021 season, the McDowell Lady Titans volleyball team had to navigate around some tall players up front.

McDowell JV teams take it on the chin in Taylorsville

TAYLORSVILLE – It was a rough evening for McDowell High School’s two junior varsity basketball teams on Friday down in Taylorsville.

McDowell's Daisy Rice makes a pass during a recent game. The Lady Titans defeated Watauga on the road Wednesday and travel to Alexander Central tonight.

McDowell's Payton Koone makes a jumper during a recent game.