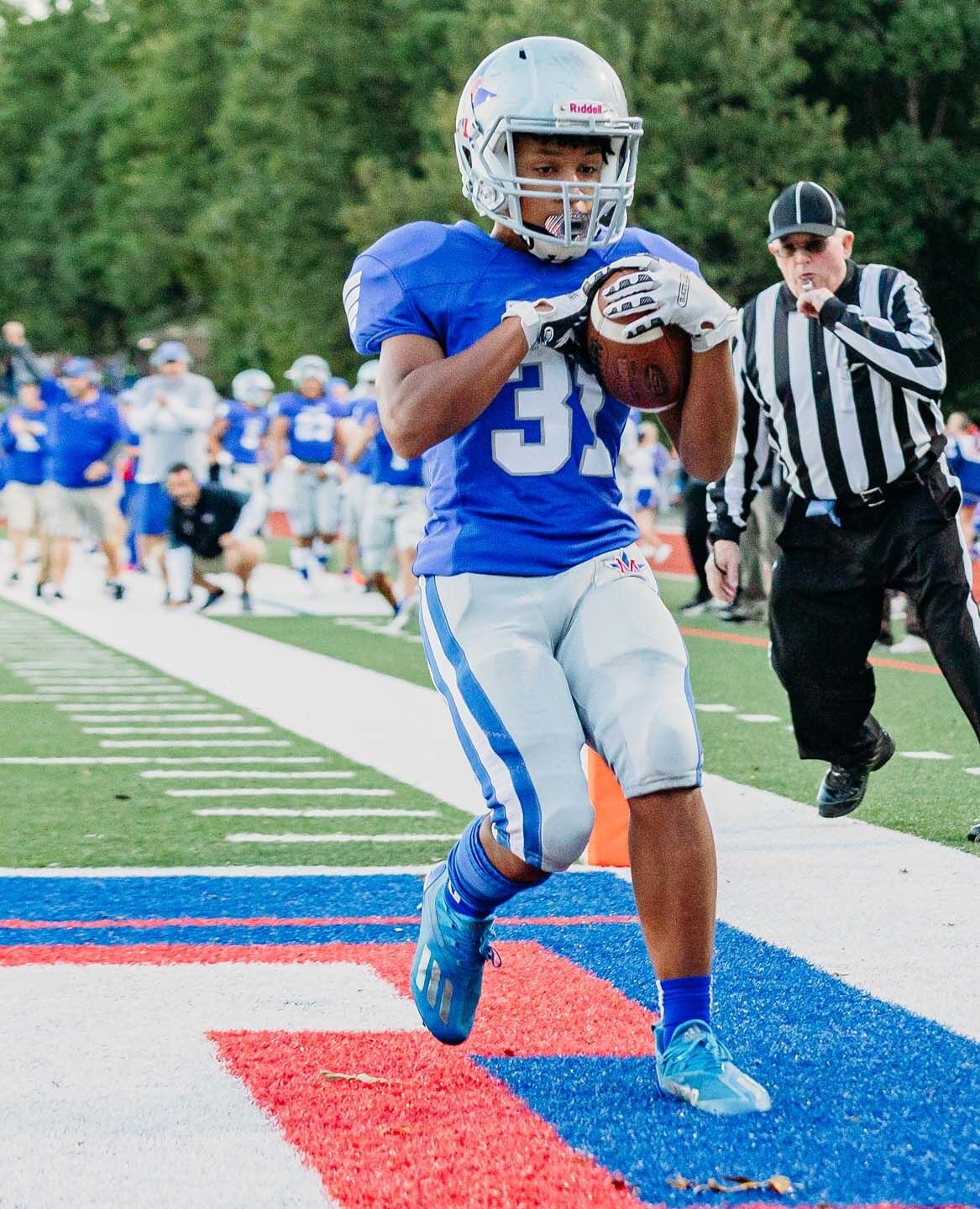 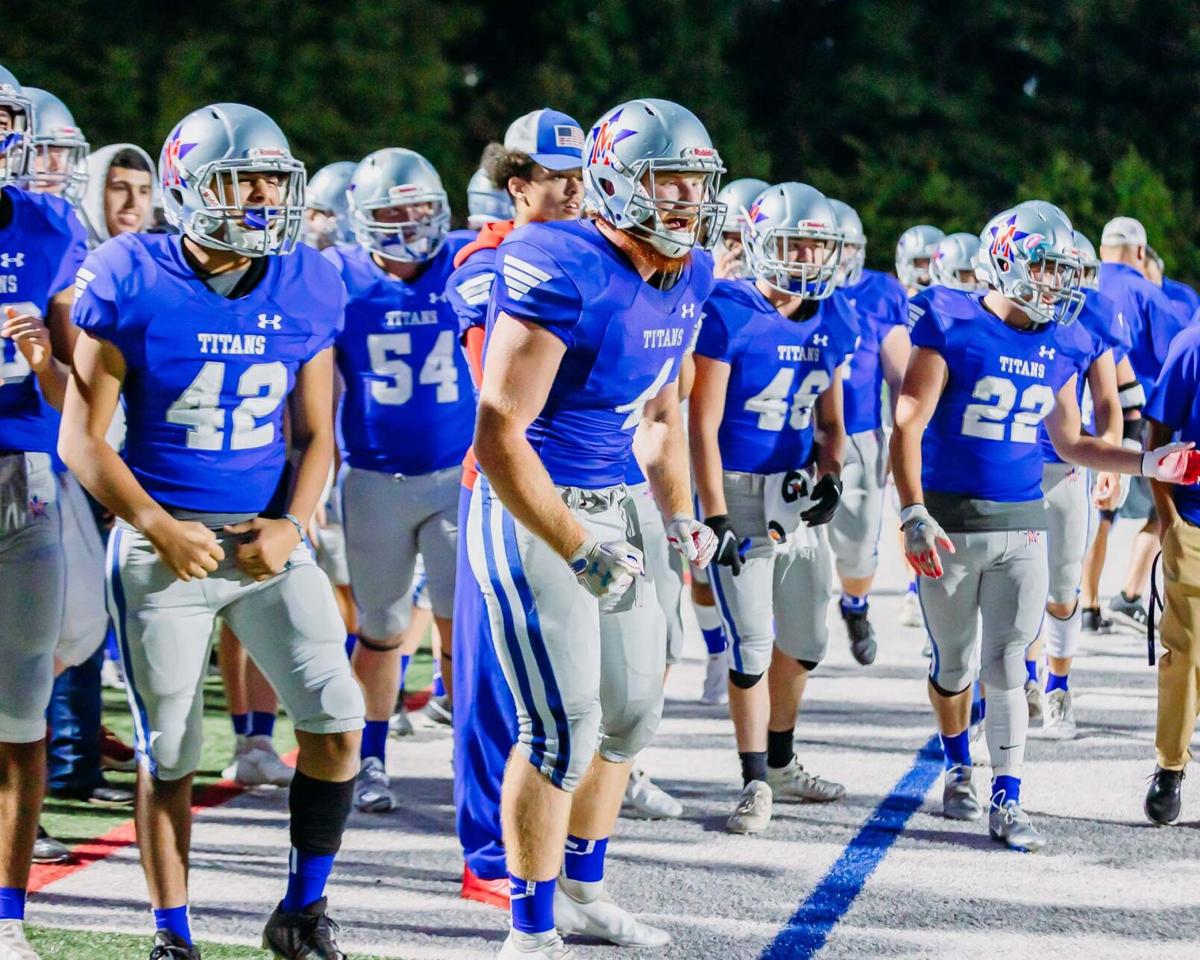 McDowell players react on the sideline during a recent game. The Titans (4-1 overall, 2-0 The Mountain 3A/4A Conference) host Enka tonight in the annual homecoming game (7 p.m. kickoff). The school will induct a new Athletic Hall of Fame class at 6:30 p.m.

Note: "Tonight" in the story refers to Friday.

In the recent history of McDowell High football, the Titans haven’t had many games like last week’s.

The Titans (4-1 overall, 2-0 The Mountain 3A/4A Conference) blitzed the North Buncombe Blackhawks from the opening kickoff, and built an insurmountable 46-7 lead at halftime en route to a 53-13 blowout victory.

That outcome stood in stark contrast to McDowell’s three other wins this season, which came by 6, 3 and 10 points respectively.

“It felt good to win a football game the way we did,” said the third-year head coach. “It was kind of nice to be going into halftime a little relaxed. It was nice to be able to get some kids in the game who don’t normally get to play. Everybody sees your starters, but if you didn’t have those other kids, you’d be in trouble. It takes all of them to make a team, and it was good for them to get to play.”

Granted, the Blackhawks came into the contest winless and hadn’t scored a single point in conference play. The Titans had a clear advantage in personnel, but you still have to execute and get the job done, and Brewer was pleased with the way his team did just that. McDowell played cleanly; the Titans didn’t commit a turnover and collected just five penalties for 42 yards.

“Sometimes, those are your toughest games,” said Brewer. “When you know you’re better than the other team, sometimes you lose focus.”

This week’s opponent in the annual homecoming game, the Enka Jets, might appear similar to North Buncombe at first glance. The Jets (1-4, 0-2) have been outscored 163-55 by their opponents, and their lone victory came in the season opener against Hayesville. Like North Buncombe, the Jets have been shut out in league play, falling by a combined 88-0 to Erwin and A.C. Reynolds.

But hold the phone.

“The thing that stands out to me is how hard they play,” said Brewer. “Their defensive line comes off the ball hard, and they’ll do some things to try and disrupt us. They’ll blitz straight up the gut and try to put pressure on us. They’re better than a 1-4 football team, I’ll tell you that.”

Offensively, the Jets certainly aren’t afraid to air it out. Sophomore quarterback Cam Wait (5-8, 130) has thrown it 136 times, completing 79 passes for 742 yards and six touchdowns with nine interceptions. Receivers Matthew Rogers (28 receptions, 230 yards, 2TDs) and Chase Boswell (12-228-3TDs) are his favorite targets. Junior LaDarrell Mashburn is the club’s leading rusher with 122 yards and a score on 39 carries.

Further complicating matters is the fact McDowell may be without one of its primary offensive weapons tonight. Junior running back Blake Boswell, who leads the team in rushing with 516 yards and six TDs on 89 carries, is listed as day-to-day after suffering an ankle injury in the first half against North Buncombe. Boswell was still sore as of Thursday afternoon, and may see limited action tonight if he gets to take the field at all.

But Brewer said he’s comfortable with the team’s depth at running back. Senior Kiyaun Selby (31 carries, 205 yards, TD) and freshman Josh Ellis (16-116-TD) are ready to step in and shoulder the load. Combined, the duo averages a healthy 6.8 yards per carry.

“He’s a bull,” said Brewer of Boswell. “He runs hard. But with Selby and Josh, we’re lucky that we have some other kids who can carry the football.”

The Titans also thrown it well so far. Senior quarterback Gabe Marsh is 51-of-84 passing for 667 yards and five touchdowns with three picks. Tight end Jeremiah Ellis (15-218-2TDs) and sophomore Jackson Marsh (16-139) have been his primary receivers. But junior wide-out Matthew Spivey emerged as a threat last Friday with 79 receiving yards on two catches, both of which went for touchdowns.

Defensively, linebackers Grayson Blackwelder and Colby Carr had field days against the Blackhawks. Blackwelder made 11 stops, three for losses, while Carr had eight tackles and also recorded three tackles for losses. Senior Collin Campbell came off the bench to make six tackles and defensive back Devyn Cash made his return to the lineup after a shoulder injury with six stops.

But the defensive highlight for the Titans may have been Magesty Summey’s 50-yard interception return for a touchdown on the final play of the first half. Summey’s pick-six put an exclamation point on one of the most explosive halves in McDowell history.

On the season, Blackwelder leads the team in tackles with 48, and tackles for loss with six. Carr has made 30 tackles and defensive lineman Jake Marsh has 29 tackles, including five for losses.

McDowell is 8-4-1 all-time against the Jets and have taken three in a row from Enka, including a 28-0 win in the last meeting between the two back in 2016.

In addition to the homecoming festivities, the school will induct its latest Athletic Hall of Fame class. The ceremony begins at 6:30 p.m., with kickoff set for 7 p.m.

The last time the McDowell Titans played in a football game this important this late in the season, none of the team’s current players had eve…

Another big win: Titans take down Jets to stay unbeaten in conference play

The McDowell Titans put the hammer down when the flag dropped, let up on the throttle in the second half, and cruised home with a 36-7 win ove…

The West McDowell Spartans football team has experienced its share of bad luck this fall, dealing with COVID related cancellations and postponements.

McDowell players react on the sideline during a recent game. The Titans (4-1 overall, 2-0 The Mountain 3A/4A Conference) host Enka tonight in the annual homecoming game (7 p.m. kickoff). The school will induct a new Athletic Hall of Fame class at 6:30 p.m.