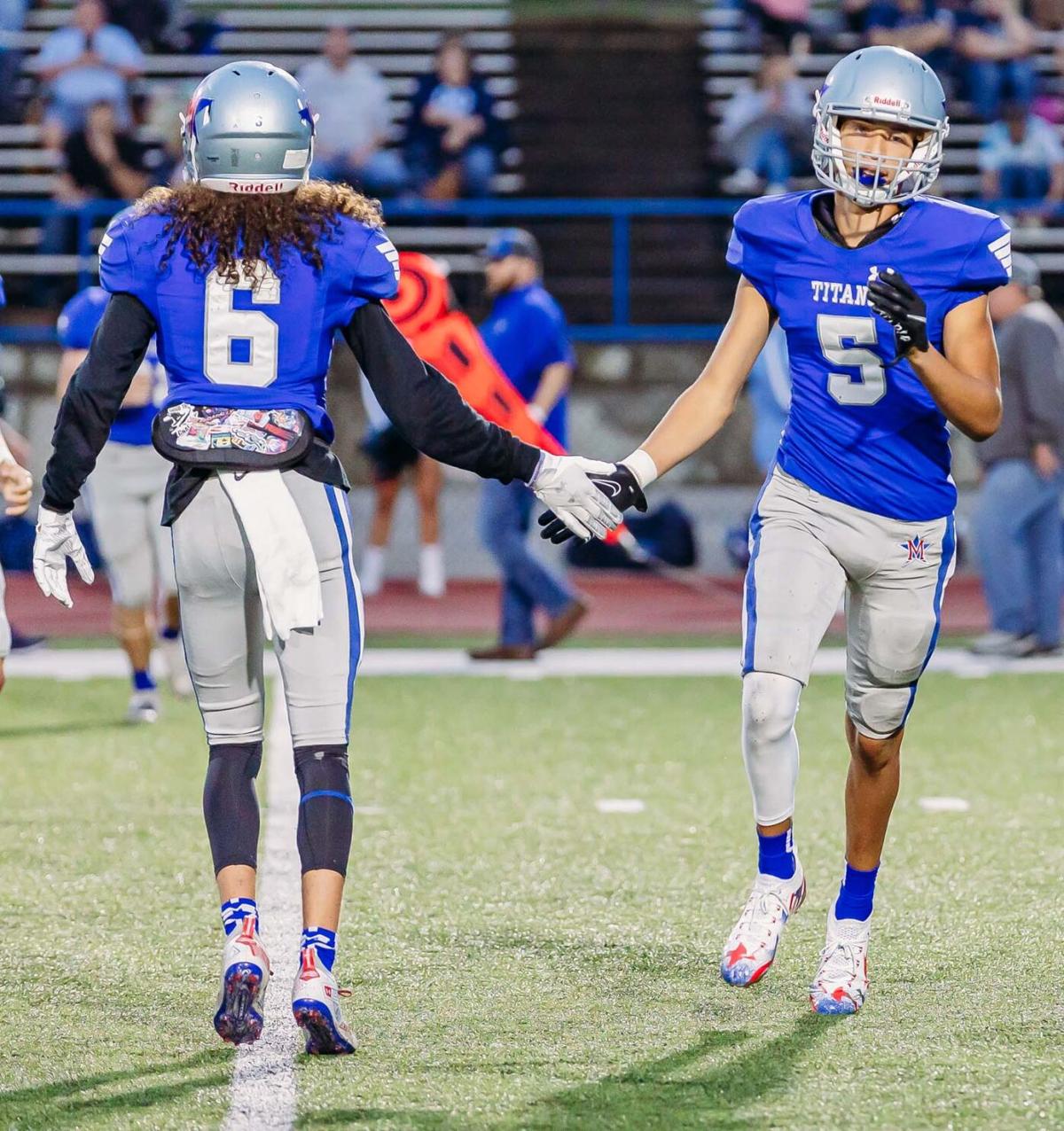 McDowell’s Majesty Summey, 5, shakes hands with teammate Jeryah Cash after Summey made an interception during last week’s win over Enka. The Titans (5-1 overall, 3-0 The Mountain 3A/4A Conference) are on the road at Asheville tonight with sole possession of first place in the conference standings on the line. 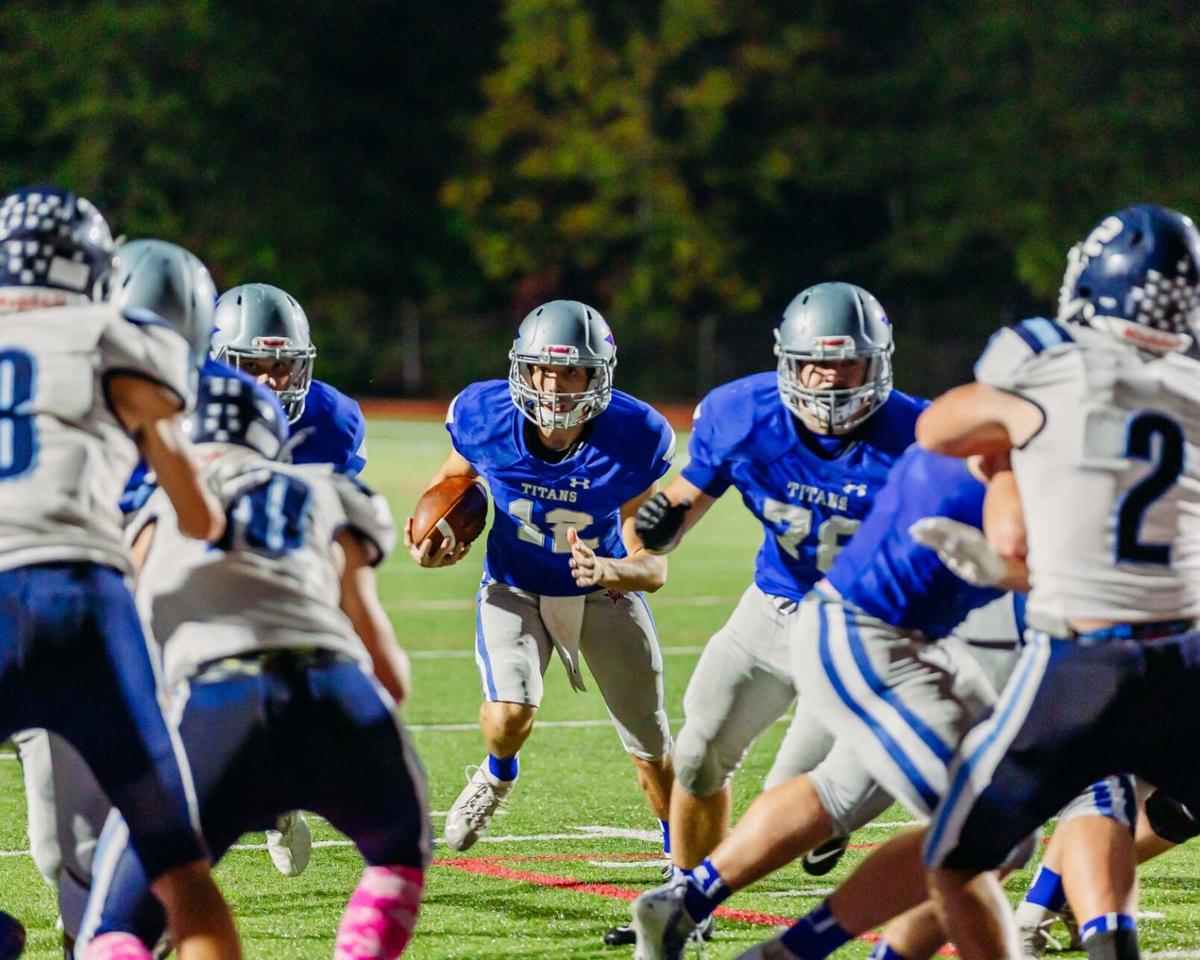 Titans quarterback Gabe Marsh runs through a hole made by the offensive line during last week’s win over Enka. McDowell is on the road at Asheville tonight (7 p.m.), and fans should know there will be no on-site ticket sales. Tickets can only be purchased online at the following website: https://gofan.co/app/events/358790?schoolId=NC103. 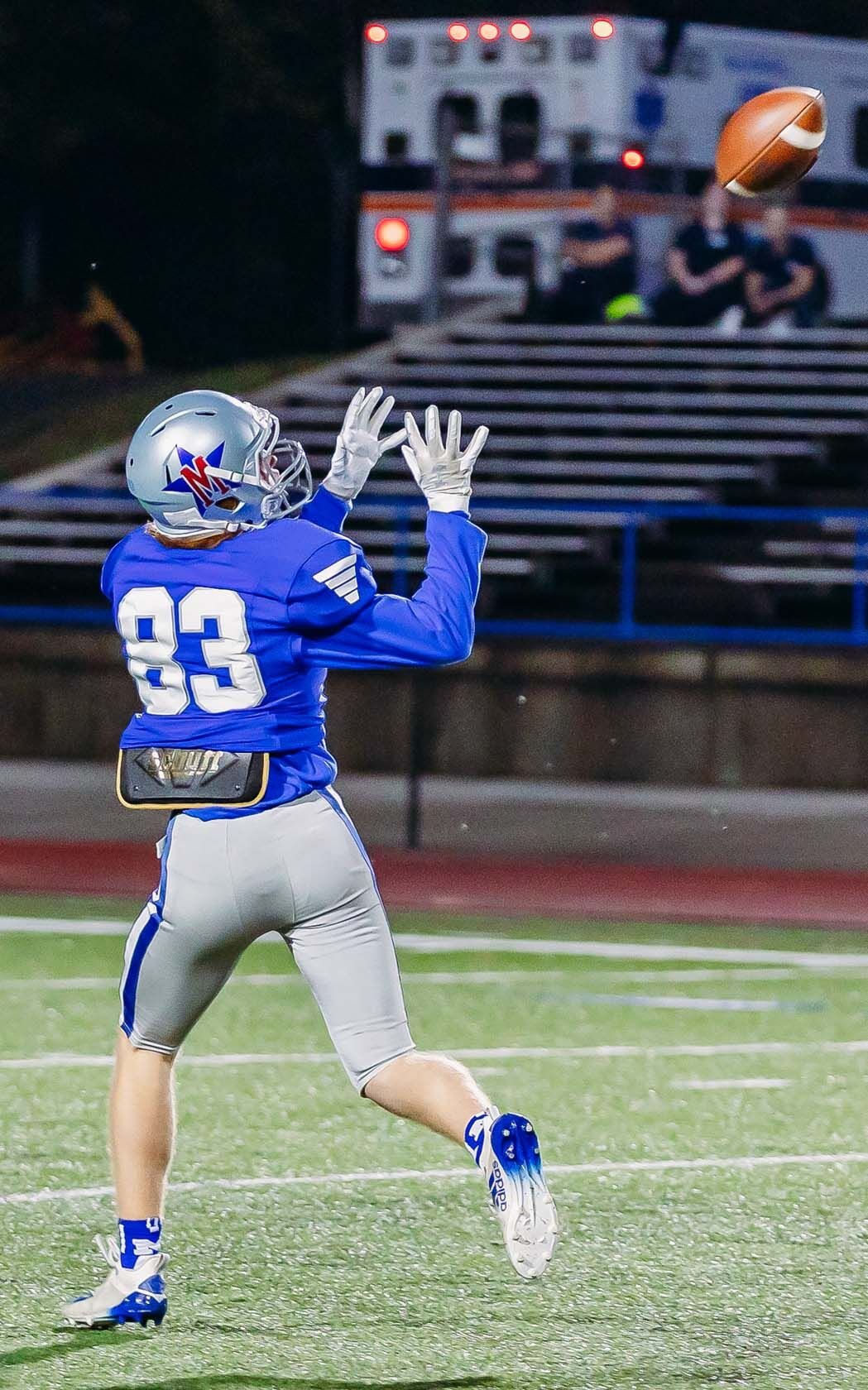 Titans receiver Matthew Spivey watches the ball all the way into his hands on a 50-yard hookup with Gabe Marsh during the Oct. 8 36-7 win over Enka.

The last time the McDowell Titans played in a football game this important this late in the season, none of the team’s current players had even been born.

Such is the significance of tonight’s game at Asheville High (7 p.m. kickoff).

It’s the biggest game for the Titans since 2001, when McDowell and A.C. Reynolds, who were both unbeaten in conference play at 5-0, met in the regular-season finale for all the marbles.

“It’s a big one,” said Titans head coach Darrell Brewer. “The kids know. They’ve been told, and not from me — I think a lot of people are talking about it.

“But I think it’s nice that these kids have an opportunity to be sitting where they are and have a chance to play in a game like this.”

Both teams would benefit greatly from a win, but the Cougars could practically wrap up the title tonight with a victory. Asheville has already slid past TMC heavyweight Reynolds, edging the Rockets 6-5 Oct. 1. After tonight, only North Buncombe and Enka — with a combined record of 1-6 — would stand between the Cougars and a perfect conference season.

But a victory would mean a lot to the Titans as well. A win tonight and one next week at home against Erwin, and McDowell would enter the finale at A.C. Reynolds assured of no worse than a tie for the conference championship. It’s been almost three decades since the Titans won a conference title; the Titans went 6-0 in league play en route to a Northwestern 4A crown in 1992.

But none of that speculation comes into play unless McDowell beats Asheville, and that won’t be easy.

The Cougars got off to an 0-2 start, but have roared back to win five straight. And they’ve won them convincingly, by an average score of 33-8. The Cougars’ defense has been especially solid, holding high-scoring Reynolds to just a field goal and a safety two weeks ago. Meanwhile, Asheville’s explosive offense has shown steady improvement since the start of the season.

“We’re going to have to be very physical on both sides of the football,” said Brewer. “We have to limit our mistakes, tackle well and block well, and we have to hold onto the football.”

Brewer said the Cougars have the potential to score from anywhere on the field.

That’s especially true of junior quarterback Khalil Conley. Conley is 47-of-84 passing for 873 yards and eight touchdowns with two interceptions, and has run for 319 yards and four more scores on 49 carries.

“He’s scary,” said Brewer. “They can all run, and he can fly. He actually scares me more when he pulls it than when he stands back there and throws it.”

Defensively, the Cougars have gotten contributions from a number of players.

The Titans will benefit from the return of leading rusher Blake Boswell, who missed last week’s game with a sprained ankle. Brewer said Boswell could likely have played in McDowell’s 36-7 win over Enka last Friday, but didn’t out of an abundance of caution. “Bos has had a good week of practice,” said Brewer.

Quarterback Gabe Marsh is 55-of-93 for 762 yards and five touchdowns with five picks. One of his two interceptions against Enka last week came on a tipped ball. Tight end Jeremiah Ellis (16 receptions, 238 yards, 2TDs) has been his primary receiver, but junior wide receiver Matthew Spivey (5-153-2TDs) has emerged as a deep threat in recent games, and sophomore Jackson Marsh (16-139) has been reliable as well.

Defensively, senior linebacker Grayson Blackwelder has been a beast, leading the Titans in tackles with 55 and tackles for loss with eight. Sophomore middle linebacker Colby Carr has 36 stops to his credit, with three for losses, and senior lineman Jake Marsh has 32 tackles with five for losses, including two sacks. Junior linebacker/defensive back Majesty Summey has 22 tackles and leads the team with three interceptions.

In addition to Boswell’s return, the Titans will also have senior lineman James Day available this week. Day was sick last week and missed the Enka game. Brewer said the plan is for the all-conference right guard, normally a two-way player, to play offense only tonight.

The Titans will be without the services of veteran defensive coordinator Keith Styles, who is currently under COVID-19 quarantine. Brewer said Styles should be able to return to practice next Monday.

“He does a great job,” said Brewer. “He is sorely missed.”

Tickets: There will be no on-site ticket sales tonight. Tickets can only be purchased online at this website: https://gofan.co/app/events/358790?schoolId=NC103

Did you know? The Titans are 1-18 all-time against the Cougars, but that one victory was a big one. The Titans beat Asheville 13-0 in a memorable, fight-marred contest at Asheville in 1983 and went on to capture the Northwestern 4A Conference championship. Since then, the Cougars have run off 10 wins in a row over the Titans.

AP Top 25: Cincinnati up to No. 2; Purdue snaps poll drought

Cincinnati moved up to No. 2 behind Georgia in The Associated Press college football poll Sunday, the first time a team from outside the tradi…

McDowell’s Majesty Summey, 5, shakes hands with teammate Jeryah Cash after Summey made an interception during last week’s win over Enka. The Titans (5-1 overall, 3-0 The Mountain 3A/4A Conference) are on the road at Asheville tonight with sole possession of first place in the conference standings on the line.

Titans quarterback Gabe Marsh runs through a hole made by the offensive line during last week’s win over Enka. McDowell is on the road at Asheville tonight (7 p.m.), and fans should know there will be no on-site ticket sales. Tickets can only be purchased online at the following website: https://gofan.co/app/events/358790?schoolId=NC103.

Titans receiver Matthew Spivey watches the ball all the way into his hands on a 50-yard hookup with Gabe Marsh during the Oct. 8 36-7 win over Enka.