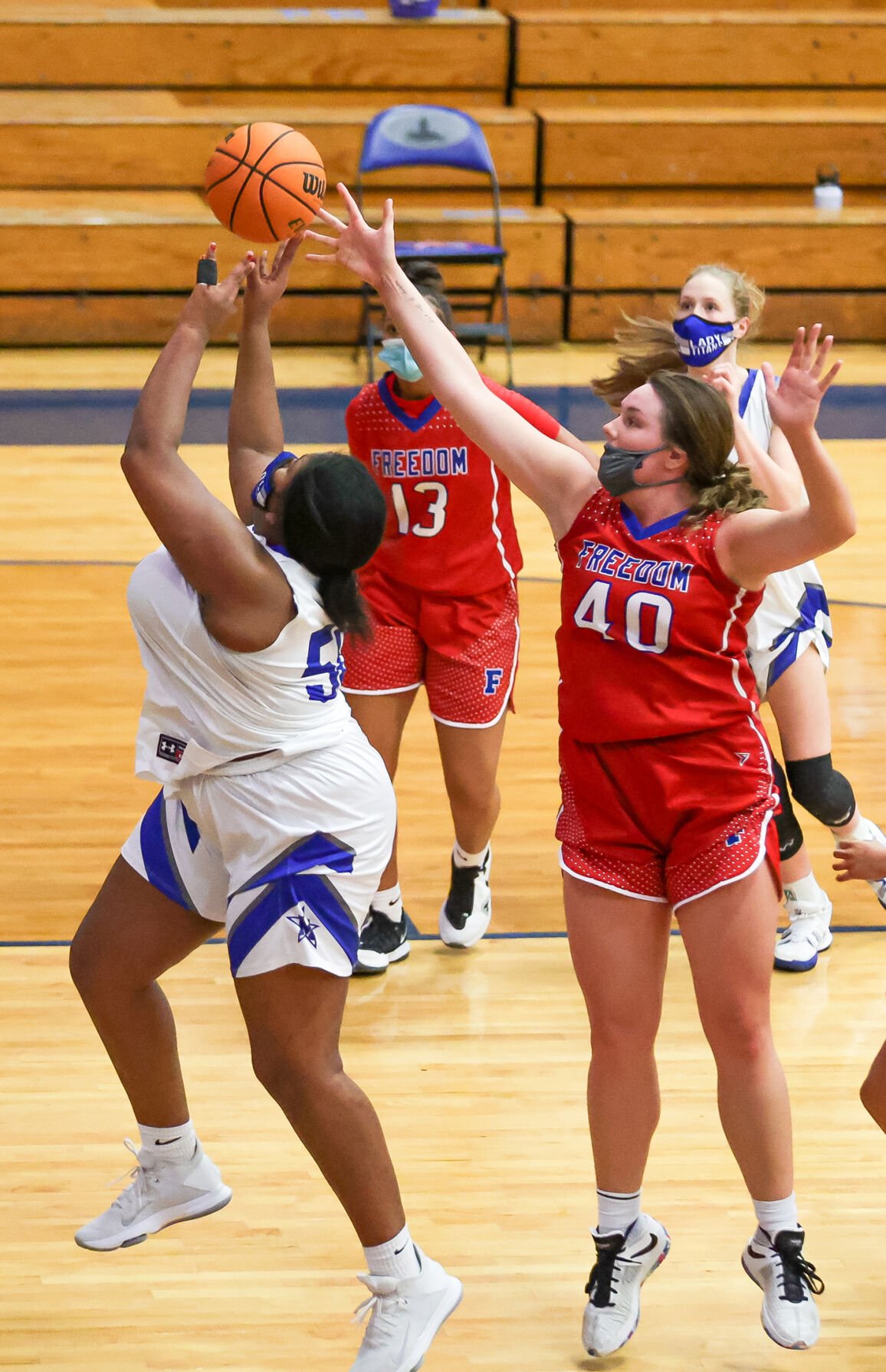 McDowell's Naliyah Boyce goes to the basket against the defense of Freedom's Adair Garrison during Friday's 67-53 loss in the Lady Titans' season finale. Boyce, a senior, finished with 22 points and 14 rebounds. 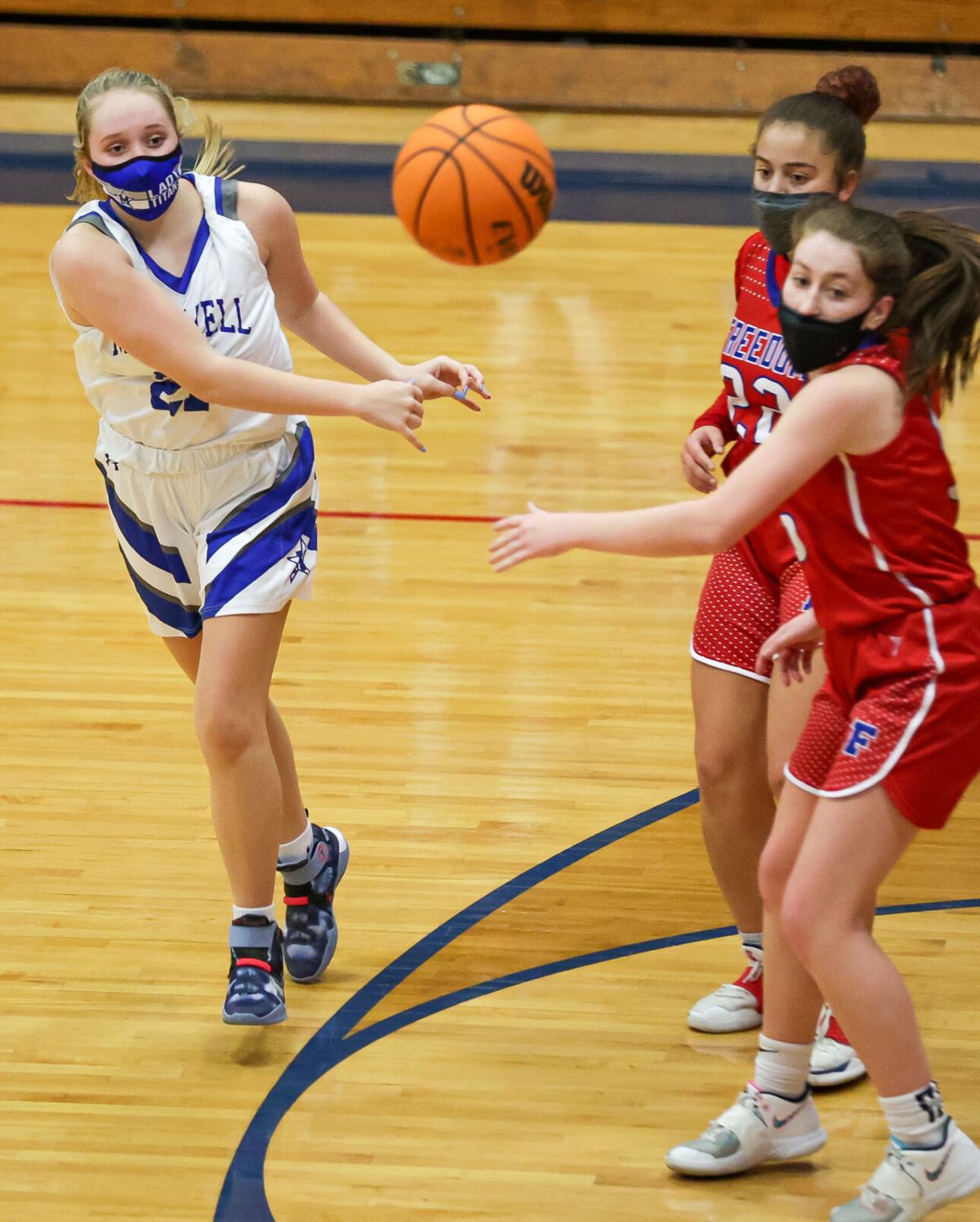 McDowell's Faith Laws makes a pass on the perimeter during Friday's game against Freedom. 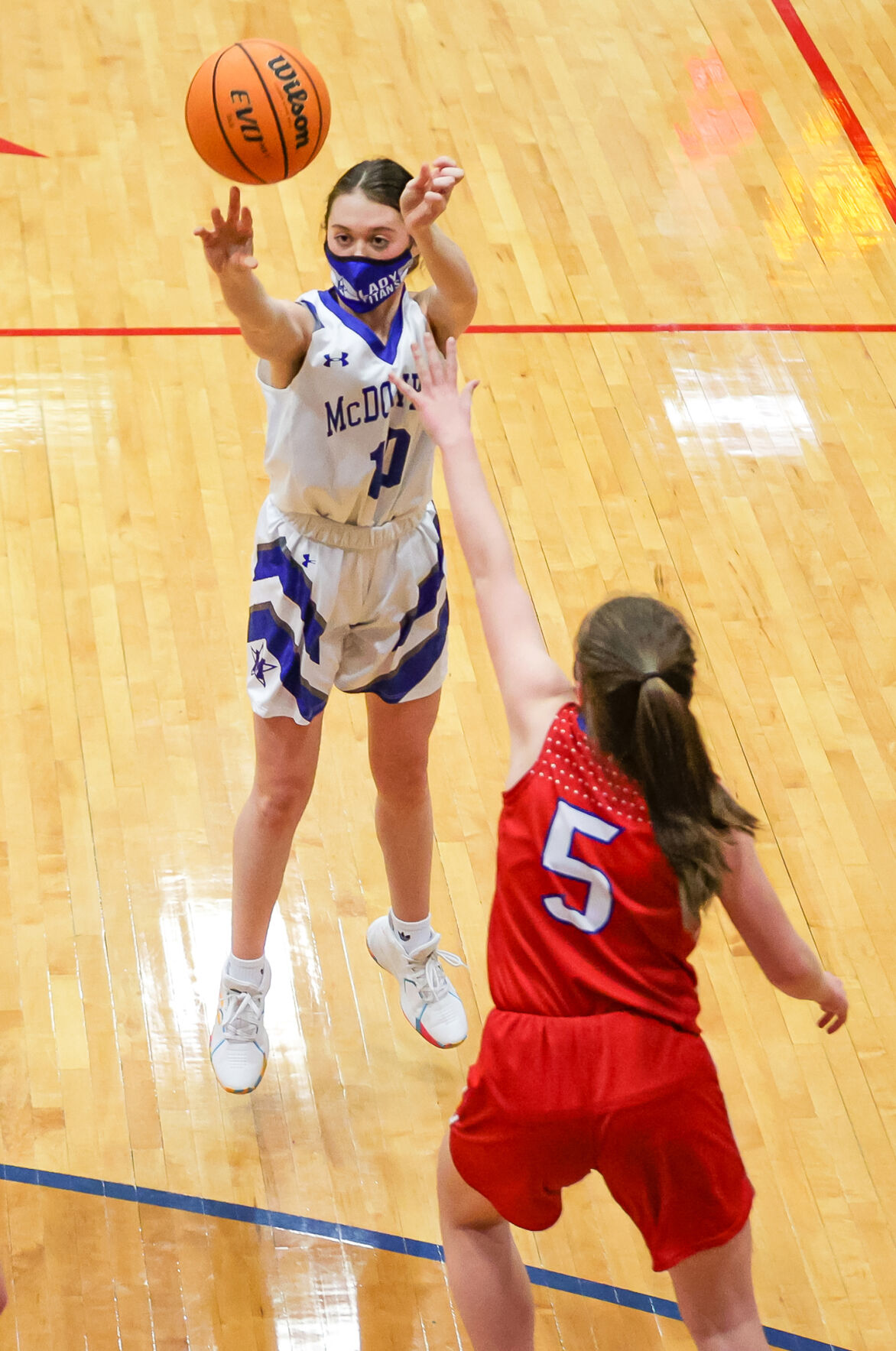 Lady Titans senior Payton Koone bombs one of her two 3-pointers during Friday's loss to Freedom.

The odds were stacked heavily against the McDowell Lady Titans in their regular-season finale Friday night against the Freedom Lady Patriots.

But McDowell wasn’t going down without a fight.

The Lady Titans turned in one of their best offensive efforts of a bizarre season abbreviated and often interrupted by the COVID-19 pandemic, but fell 67-54 to the unbeaten Lady Pats in a game much closer than the final score would seem to indicate.

McDowell (3-6) stayed within striking distance of the Northwestern 3A/4A Conference champions throughout most of the game, but Freedom (9-0) had an answer – and usually a quick one – for seemingly every McDowell rally. On 12 occasions, Freedom, utilizing a potent transition game, responded to a Lady Titan basket within 20 seconds of game time.

As a result, it was difficult for McDowell to cut into the lead, especially once it grew to double figures late in the third quarter.

“I can’t say enough about these girls,” said Lady Titans head coach Jennifer Kinninger. “They came out and fought. We talked about how wearing that jersey means something, especially tonight, and they came out and left it all on the floor. I’m so proud of them.”

Senior post Naliyah Boyce had a huge game in the paint, scoring a team-high 22 points on 9-of-14 shooting and pulling down a game-high 14 rebounds. Sophomore guard Faith Laws (3 assists), starting in place of injured senior Daisy Rice, went 3-of-4 from 3-point range and joined Boyce in double figures with 10.

With Freedom focused on stopping Boyce, McDowell connected on 6-of-10 from downtown. Payton Koone (6 points, 3 assists) went 2-of-2 and Peyton McPeters (5 points) 1-for-1 from 3-point range.

Despite Freedom’s firepower, the Lady Titans had their chances.

McPeters’ triple off a Baker assist beat the first-half buzzer and sent McDowell into the locker room down 30-24.

Boyce made a pair of baskets over the first four minutes of the third, and the Lady Titans were within 30-28.

McDowell had opportunities to tie, but couldn’t do it, and Freedom eventually pushed the lead back to 36-30 on a follow shot by Lee Kania with 3:15 to go in the quarter.

Koone answered with a clutch 3-pointer off a McPeters assist to get the Lady Titans within one possession at the 3-minute mark, but Freedom came up with yet another rapid response. Stevee McGee’s drive and score 10 seconds later made it 38-33. Hemphill then converted a three-point play off a strong drive, and the lead was 41-33 with 2:16 to go in the third. Freedom led 47-37 after three.

McDowell got as close as six in the fourth, but the Lady Patriots – who were 20-of-27 from the line – made enough free throws down the stretch to seal the deal. Turnovers also plagued McDowell in the fourth quarter, with eight of the Lady Titans’ 17 miscues coming in the final stanza.

“Take away a couple of offensive rebounds and put-backs, and that game looks completely different,” said Kinninger. “Madi getting in foul trouble early really hurt us.

“We made some shots, and when we got the ball inside, Naliyah played like a beast. I’m just super proud of the way they handled themselves tonight and showed what a Lady Titan should be.”

McDowell shot the ball well, hitting for 44% (20-45) for the game. Freedom shot 39% (22-56). But the Lady Patriots held a 34-25 advantage on the boards and a decisive 16-6 edge on the offensive glass. Freedom out-rebounded McDowell 7-0 offensively in the first half. The Lady Patriots committed just eight turnovers, with only three of them coming after the break.

The Lady Titans are almost certainly finished for the season, according to Kinninger. South Caldwell, the split league’s only other 4A program, finished ahead of McDowell in the standings and earned the only State 4A Playoff berth available to the conference. It isn’t likely the Lady Titans could snag a wild-card bid with a 3-6 mark. The playoff brackets will be released today (Sunday) at nchsaa.org. McDowell had made the playoffs for 36 straight seasons prior to this one,

The hold teams have on the 2021 high school football season is tenuous at best. One positive COVID-19 test could end a team’s year in a flash.

Rising to the challenge: Titans hoping for reversal of fortunes on defense

The football teams in the Northwestern 3A/4A Conference run a bewildering variety of offenses – everything from run-based, wing-T attacks to t…

McDowell's Naliyah Boyce goes to the basket against the defense of Freedom's Adair Garrison during Friday's 67-53 loss in the Lady Titans' season finale. Boyce, a senior, finished with 22 points and 14 rebounds.

McDowell's Faith Laws makes a pass on the perimeter during Friday's game against Freedom.

Lady Titans senior Payton Koone bombs one of her two 3-pointers during Friday's loss to Freedom.