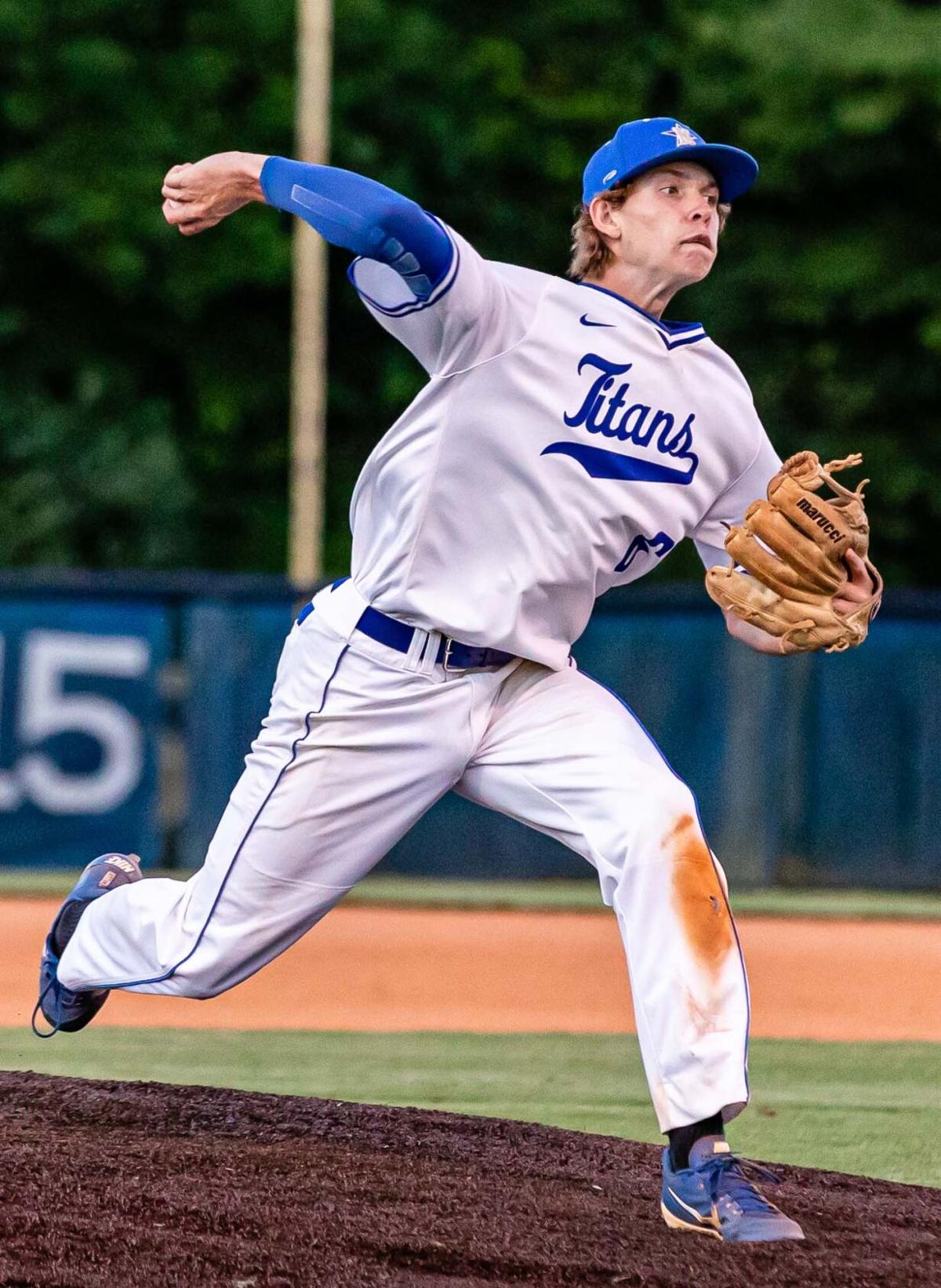 McDowell Titans senior Dusty Revis delivers a pitch. Revis got the complete-game victory on the mound as the Titans edged Porter Ridge 5-4 in the second round of the State 4A Playoffs Thursday night. McDowell hosts Reagan Saturday at 7 p.m. at Titan Field in the third round. 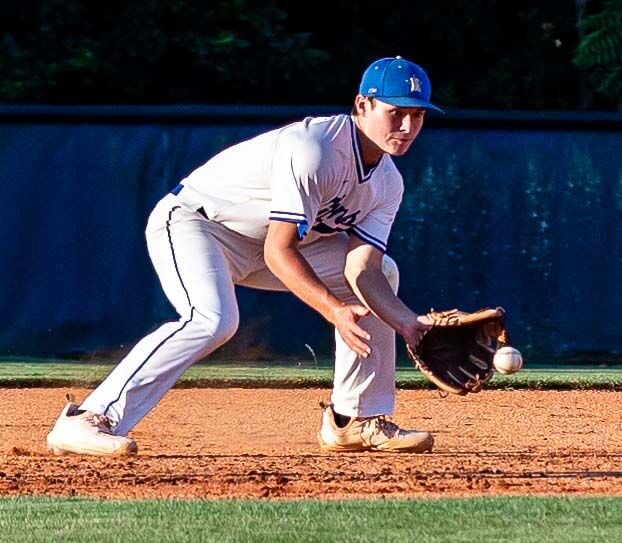 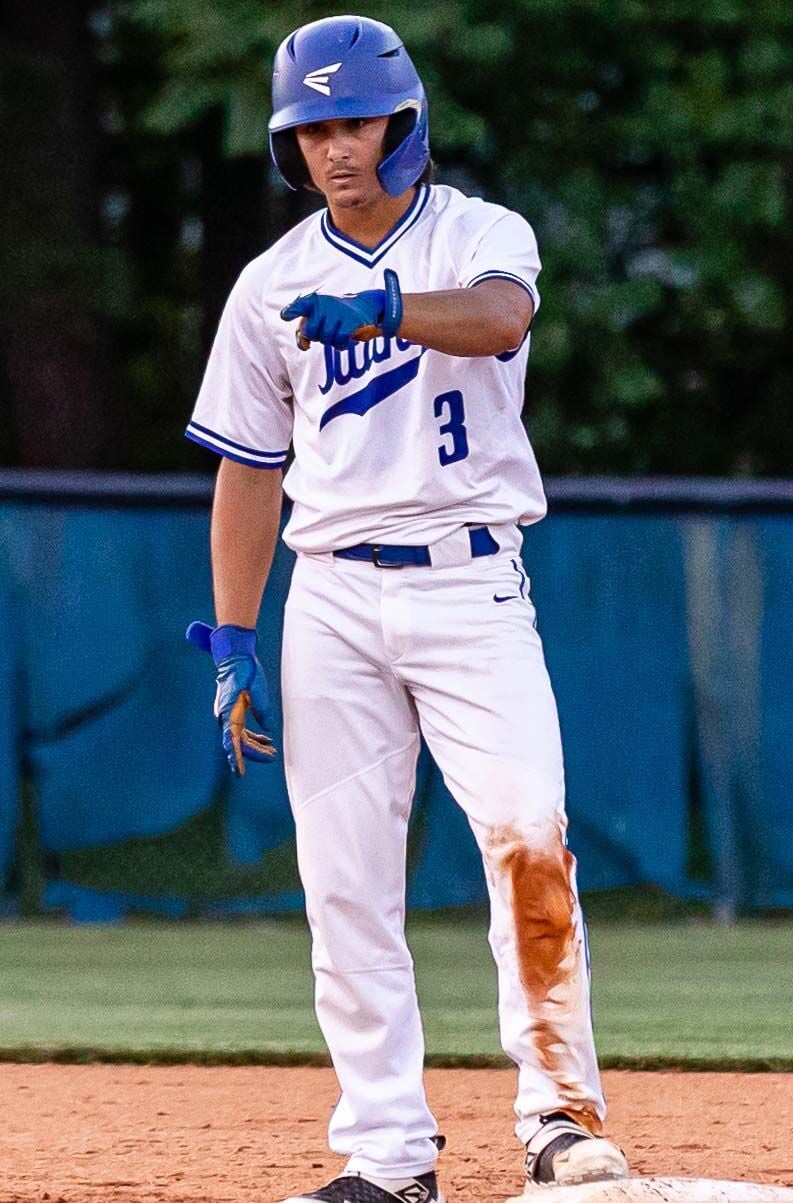 McDowell’s Three Young stands at second after getting a hit in a recent game.

The McDowell Titans baseball team has inspired a number of phrases and terms over this season to describe its style of play.

But in Thursday’s second round State 4A Playoff game, there was only one nickname that fit: The Comeback Kids.

The Titans (14-1), seeded second in the 4A West Region, used a sustained rally in the late innings of Thursday’s contest to pull off an exciting, 5-4 walk-off win against seventh seed Porter Ridge at Titan Field in one of the most intense games played at home in recent memory.

The win extended McDowell’s current winning streak to a dozen games. It also catapulted the Titans into the third round, where they will face the third seed Ronald Reagan Raiders at Titan Field Saturday (7 p.m.). Reagan (14-2) held off Myers Park 4-3 on Thursday.

Senior catcher Cyrus Black drove in the game-winner on a fielder’s choice with the bases loaded in the bottom of the seventh to cap a comeback that saw the Titans erase a 4-0 deficit.

McDowell, for the second playoff game in a row, featured a packed house down the entire first-base line while the visiting Pirates (13-3) also had a large and vocal contingent that made the two-hour trip from Indian Trail. The way the game progressed created an atmosphere that was very intense.

“Our community came out once again tonight and supported us and that lifts our kids up emotionally,” said McDowell head coach Alex Smith. “You don’t get to see that very often at this level but the atmosphere tonight reached a very high level.

“This baseball game was about two good teams who competed and gave everything they had. You don’t want to see a team lose this kind of game, but thankfully we were able to get the win.”

Both sides had a lot to cheer about throughout the contest, but early on, the momentum sided toward the visitors as Porter Ridge took advantage of an error to score a run in the opening half-inning.

Jaylen Brown (4-4, double, 2R) ripped a single up the middle to begin the game. Titans starting pitcher Dusty Revis, on a pickoff attempt at first, threw wildly into foul territory and Brown made it around to third. Jake McGillivary then put the Pirates in front 1-0 when he grounded out to McDowell second baseman Logan Duncan, scoring Brown easily.

The Titans failed to push anything across the plate in the first and second innings against starting pitcher Ryan Schwartz (5 IP, 3R, 6H, 3K BB) despite having runners reach scoring position in both frames.

Then, in the top of the third, the Pirates went to work again with a patient approach at the plate. Caleb Gant singled to left off Revis to begin the third. Brown then slapped a basehit to right and then McGillivary reached on a bunt single to load the bases. Schwartz then went the other way to right, driving in both Gant and Brown, making it 3-0. J.H. Vaughn then laid down a squeeze bunt, pushing McGillivary across to pad the lead to 4-0.

After dealing with some bad luck at the plate in the first two innings, the Titans finally scratched across a pair of runs against Schwartz and that was the beginning of the monumental comeback.

With the bases loaded and no outs, Logan Duncan scored from third on a passed ball. And then, a two-out, RBI single from Ethan Hamm drove in Chapel Matson, trimming the deficit in half at 4-2.

For Revis, that served as a huge momentum boost for the second half of the game. The future Mars Hill Lion settled back in and held the Pirates scoreless the rest of the way, allowing just three hits after the fourth inning.

“I feel like things settled in more as we got later in the game,” said Revis. “For me I’ve just got to trust the defense behind me and they did a good job picking us up. All the hard work we do as a team on a daily basis helped get us through this game.”

As Revis regained command of the game, the lineup continued its part of putting together quality at bats, and it became evident in the later innings that the momentum was quickly swinging to the home side.

Then in the McDowell sixth, a leadoff walk by Black off Porter Ridge reliever Matthew Wiedbrauk turned to gold. Courtesy runner Luke Roberts advanced to second on a sacrifice bunt from Ethan Hensley.

Duncan (1-2) then grounded out for the second out, but Roberts was able to advance to third. Vaughn couldn’t block Wiedbrauk’s first pitch to Revis, and Roberts raced in, tying the game at 4-4 and deflating the morale of Porter Ridge.

Still, the Pirates had one more scoring chance off Revis.

With runners on the corners and two out in the top of the seventh, courtesy runner Connor Shepherd, who was running for Vaughn, intentionally took off, hoping to force a throw from Revis (1-3, BB, SB), but the Titan hurler faked and then turned back toward third, firing a missile to Ben Barnes, who then threw out the runner trying to steal home, leaving the game in a tie.

McDowell had the opponent exactly where it wanted them at that point.

In the Titan seventh, Young walked off relief pitcher Matthew Broadway. He then made it all the way around to third on a pair of passed balls by Vaughn.

Both Ethan Hamm (1-2, RBI, BB) and Ben Barnes (1-3, BB) were then walked intentionally to load the bases. Michael Lewis then struck out looking.

And then, with one out and a 1-2 count on Black, the senior hit a chopper to second for the walk-off as Young crossed the plate on a high throw by Brown, sending the Titans into an on-field celebration.

“We didn’t give up at any point,” said Black. “I thought our offense did a great job first inning through seven getting on base, and when we weren’t on base, trying to hit the ball hard. We were able to make some of those hard hit balls count late in the game.”

Revis gutted out a hard-work victory, going the distance and allowing three earned runs on 10 hits. He struck out six, but more importantly, walked none. Revis (6-0), in 40 2/3 innings pitched this year, has allowed just four walks and holds an absurd 17:1 strikeout-to-walk ratio (68K).

“We’re going to have an even better team come in here and challenge us on Saturday,” said Smith. “But it’s still about us and doing the things we need to do in order to have a chance.”

Detroit Lions embrace being underdogs in 2021

What will it take for the Giants to take down the Dodgers?

What will it take for the Giants to take down the Dodgers?

What impacted the line move on the Dodgers?

What impacted the line move on the Dodgers?

Simone Biles says she withdrew from final to protect team, self; plus more from Tokyo

Simone Biles says she withdrew from the Olympics gymnastics team final because she wasn't in the right headspace to compete. Here's the latest.

With Simone Biles out, Russians win gymnastics gold over US

The Russian Olympic Committee has won the gold medal in women’s gymnastics after U.S. star Simone Biles exited with a medical issue.

Simone Biles finds peace of mind at Olympics: An analysis, plus more from Tokyo

Maybe gymnast Simone Biles' decision to opt out of the Olympic team and all-around events isn't so stunning after all. Here's an AP analysis, plus more from Tokyo.

Shawn Windsor: Pistons have No. 1 draft pick, but best player is often found a pick or few later

The buzz is still out there. Can you feel it?

For the first time since 2004, the U.S. men’s basketball team has lost in the Olympics, falling to France 83-76. Here's the latest from the Tokyo Games.

US swimmer Andrew goes maskless behind scenes at Olympics

Michael Andrew, who made waves for saying he wasn't vaccinated against COVID-19, didn't wear a mask behind the scenes after swimming his final.

Get the latest updates and complete coverage from Day 7 of the Tokyo Olympics ... plus an updated medal count, TV schedule and photo highlights.

A wave of rainbow-colored pride is sweeping through Olympic pools, skateparks, halls and fields with a record number of openly gay competitors in Tokyo.

McDowell Titans senior Dusty Revis delivers a pitch. Revis got the complete-game victory on the mound as the Titans edged Porter Ridge 5-4 in the second round of the State 4A Playoffs Thursday night. McDowell hosts Reagan Saturday at 7 p.m. at Titan Field in the third round.

McDowell’s Three Young stands at second after getting a hit in a recent game. 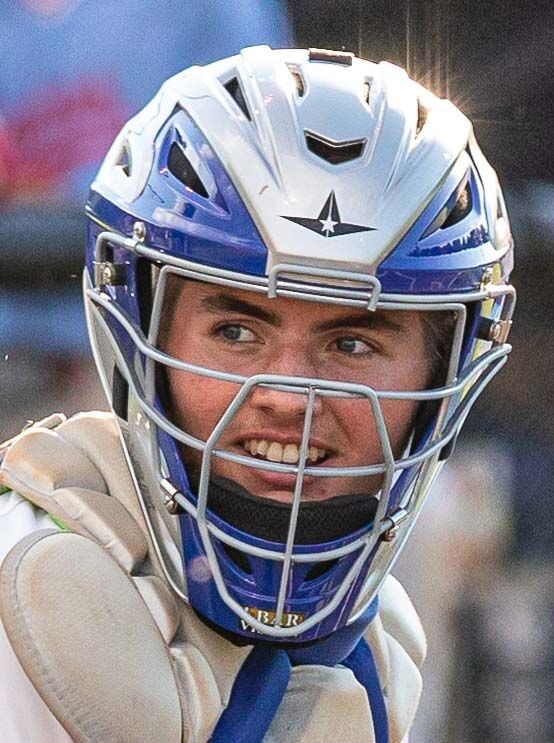