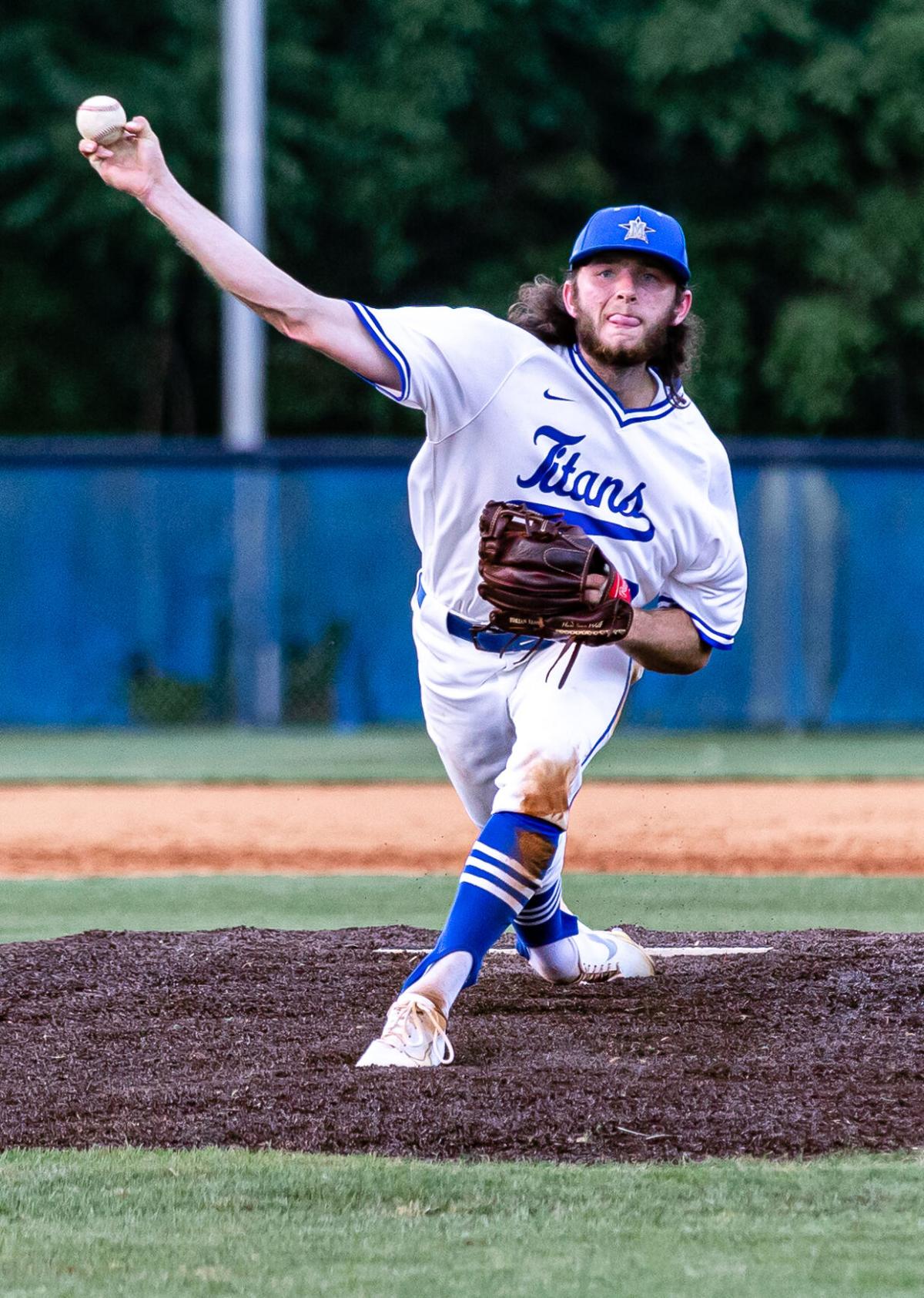 McDowell’s Chapel Matson delivers during a recent win. Matson got the win on the mound Monday as the Titans defeated Hickory 9-5 on the road. That victory, coupled with St. Stephens’ loss to Freedom, gave the Titans their first conference championship since 2002. 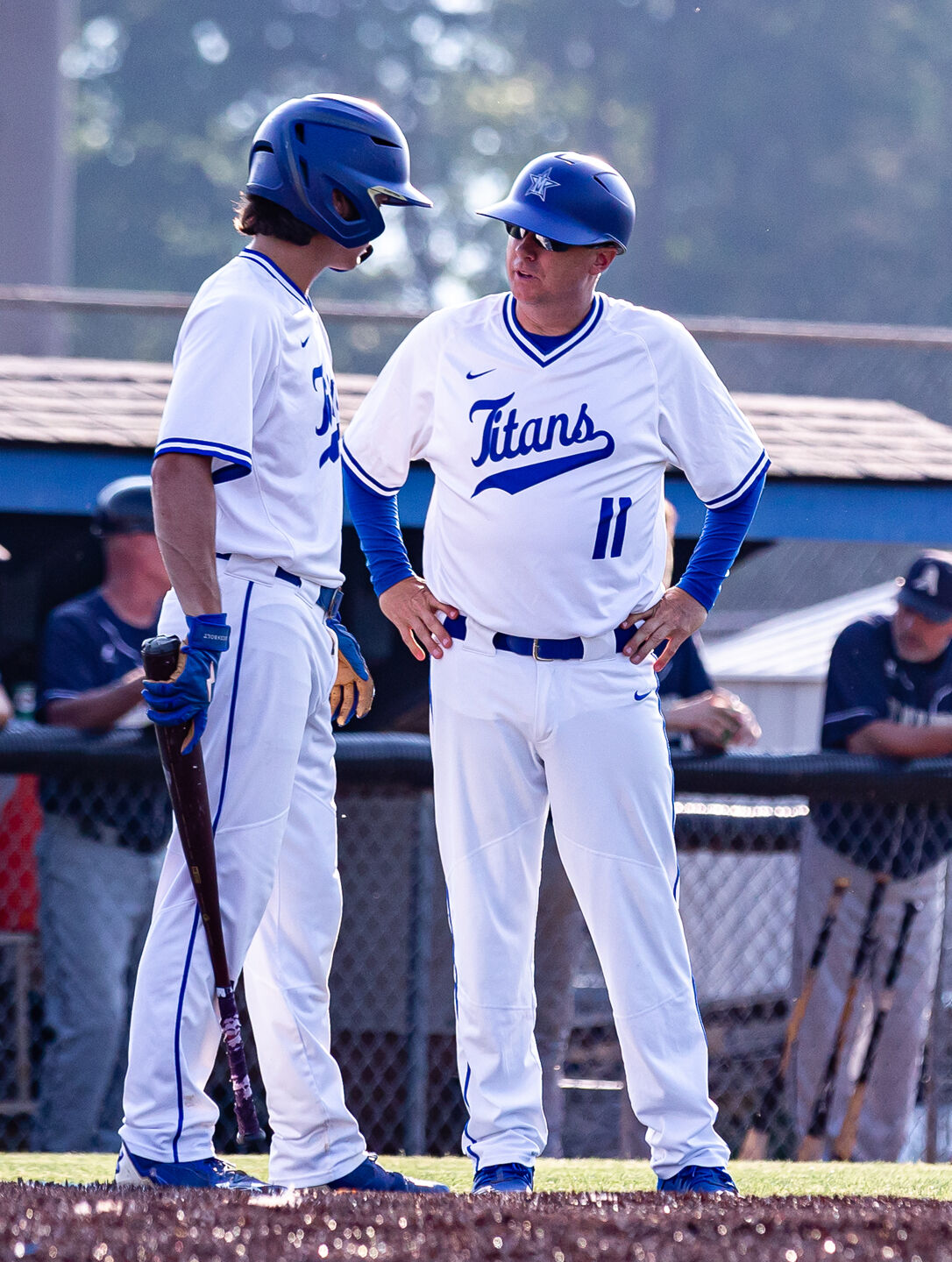 McDowell Titans head coach Alex Smith talks with a player before an at-bat during a recent win. The Titans gave the 14th-year head coach his first conference championship Monday, winning the Northwestern 3A/4A title. The Titans close out the regular season Thursday at home against St. Stephens.

And on Monday night, the rest took care of itself.

The Titans continued their hot streak on the diamond Monday, winning their 10th straight in a 14-6 road victory at Hickory. Meanwhile, just down the street at St. Stephens, the Freedom Patriots beat the Indians 8-3.

That combination gave the Titans (12-1 overall, 10-1 Northwestern 3A/4A Conference) their first conference championship since winning back-to-back titles in 2001 and 2002.

And just like that, the excitement of another win turned into a full-on celebration as news of St. Stephens’ (9-3, 8-3) loss spread.

“I am so proud of this group and what they have been able to pull off this season,” said Titans head coach Alex Smith, who won his first league title in 14 seasons at the helm. “I had received word through coaches around the seventh inning of what was going on with the other game and we waited to share the word with our kids after the game.

“This group of 14 kids has been so great in that they come in to get their work done every day, whether in the weight room or on the field. They’re focused and they get the job done. And winning this championship is their reward for that work ethic.”

Monday night’s battle wasn’t the most aesthetically pleasing victory ever, but it was sufficient, as McDowell jumped out to an early 5-0 lead in the first and was able to hold the Red Tornadoes within arm’s length the entire way.

Hickory did even the score back up with a five-run second inning, but the Titans were not going to let the opportunity slip away as they put up eight combined runs in innings three, four and five to regain control.

“The pace of the game I thought dictated how things went overall,” said Smith. “Chapel didn’t have his best game on the mound, especially with the one inning where Hickory put together some hits and some walks. Plus, Hickory struggled to throw strikes and it resulted in some long, drawn-out innings. I think from a pitching aspect that makes it harder to get in a rhythm.”

The vast majority of the damage came in the second when Hickory belted out four hits in the frame. That, along with back-to-back walks by Matson, resulted in a crooked number.

After that, Matson settled back in, allowing just one hit in the next two-plus innings before maxing out on the pitch count. Even with the rough outing by his standards, Matson finishes the regular season with an impressive resume, going 4-1 with an ERA of 1.71 in 32 2/3 innings pitched.

At the plate, the Titans had just seven hits on the night, but the Red Tornadoes struggled mightily to get the ball over the plate, walking 17 McDowell batters. That just resulted in too many scoring opportunities.

Matson was 3-for-5 at the plate with a walk, driving in two and scoring twice.

The Titans made a living playing station-to-station baseball as they recorded no extra base hits in the contest.

With the conference title now decided, Thursday’s scheduled home finale against Saint Stephens has less significance in terms of a league championship, but it still figures to be a big night as the team will honor the half-dozen seniors on the roster. The Titans will look to keep the momentum going with the State 4A Playoffs cranking up next week.

“Winning the championship does give us a sigh of relief and it takes some pressure off us,” said Smith.

“I hope that gives us the opportunity to just relax and play ball on Thursday and send our seniors out on a good note.”

The opening-round playoff games are set for next Tuesday, with the Titans hosting a first-round game. Coach Smith noted that Thursday’s starting pitcher, Dusty Revis, will get one last tune-up against the Indians, but will be on a pitch count to keep his pitching eligibility intact for the first round.

McDowell 4, Hickory 0 (Jayvees) – The Titans won for the 10th straight time, shutting out Hickory in a shortened three-inning game.

Noah Higgins held the Red Tornadoes scoreless on one hit in three innings of work. He struck out three, walked one and hit one. McDowell staked Higgins to a 3-0 lead in the top of the first.

McDowell (11-1 overall, 10-1 Northwestern 3A/4A Conference) will close out its season Thursday at home against St. Stephens.

McDowell’s Chapel Matson delivers during a recent win. Matson got the win on the mound Monday as the Titans defeated Hickory 9-5 on the road. That victory, coupled with St. Stephens’ loss to Freedom, gave the Titans their first conference championship since 2002.

McDowell Titans head coach Alex Smith talks with a player before an at-bat during a recent win. The Titans gave the 14th-year head coach his first conference championship Monday, winning the Northwestern 3A/4A title. The Titans close out the regular season Thursday at home against St. Stephens.