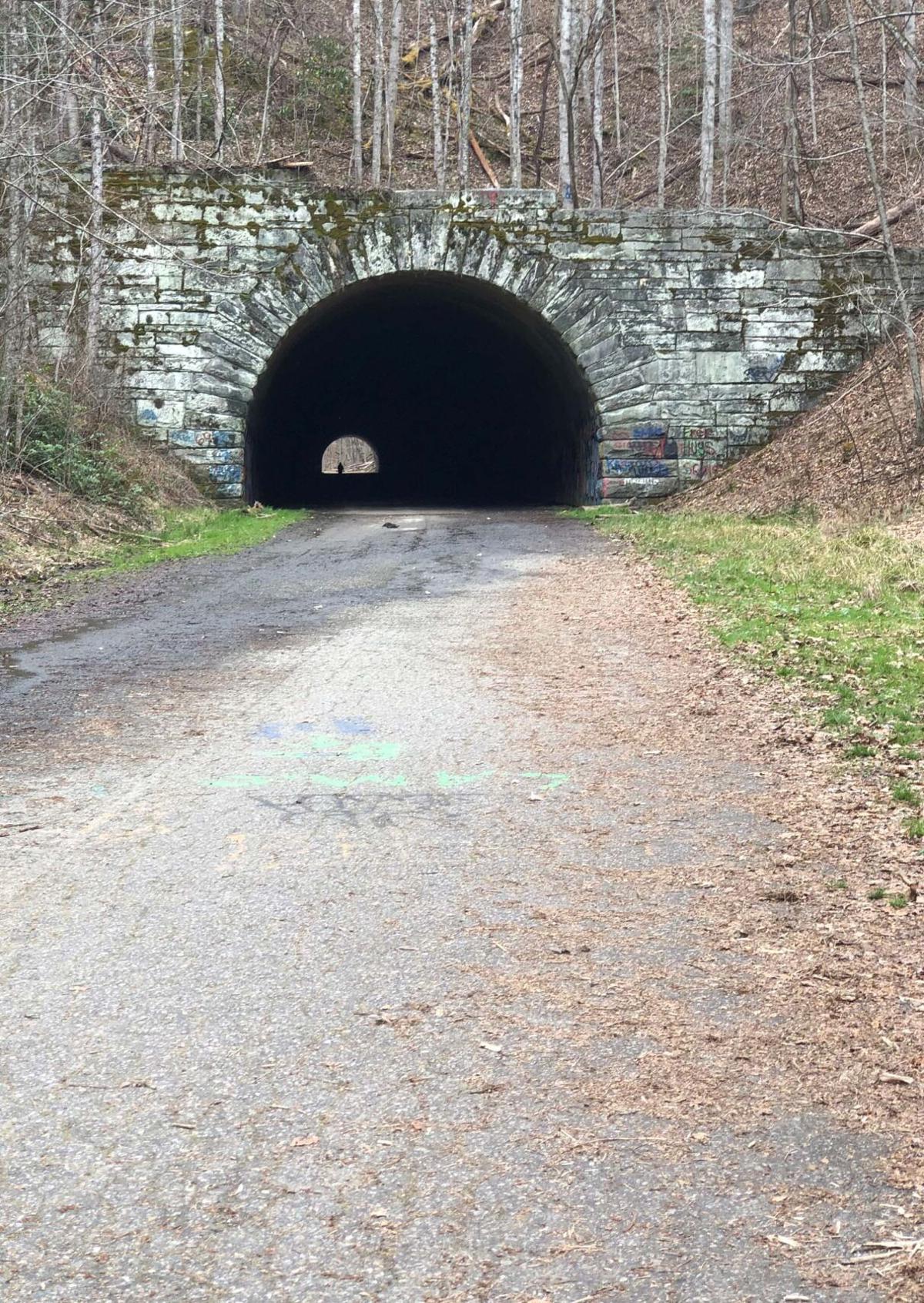 The tunnel marks the end of the “Road to Nowhere” and the beginning of a pleasant hike in the hills around Lake Fontana. 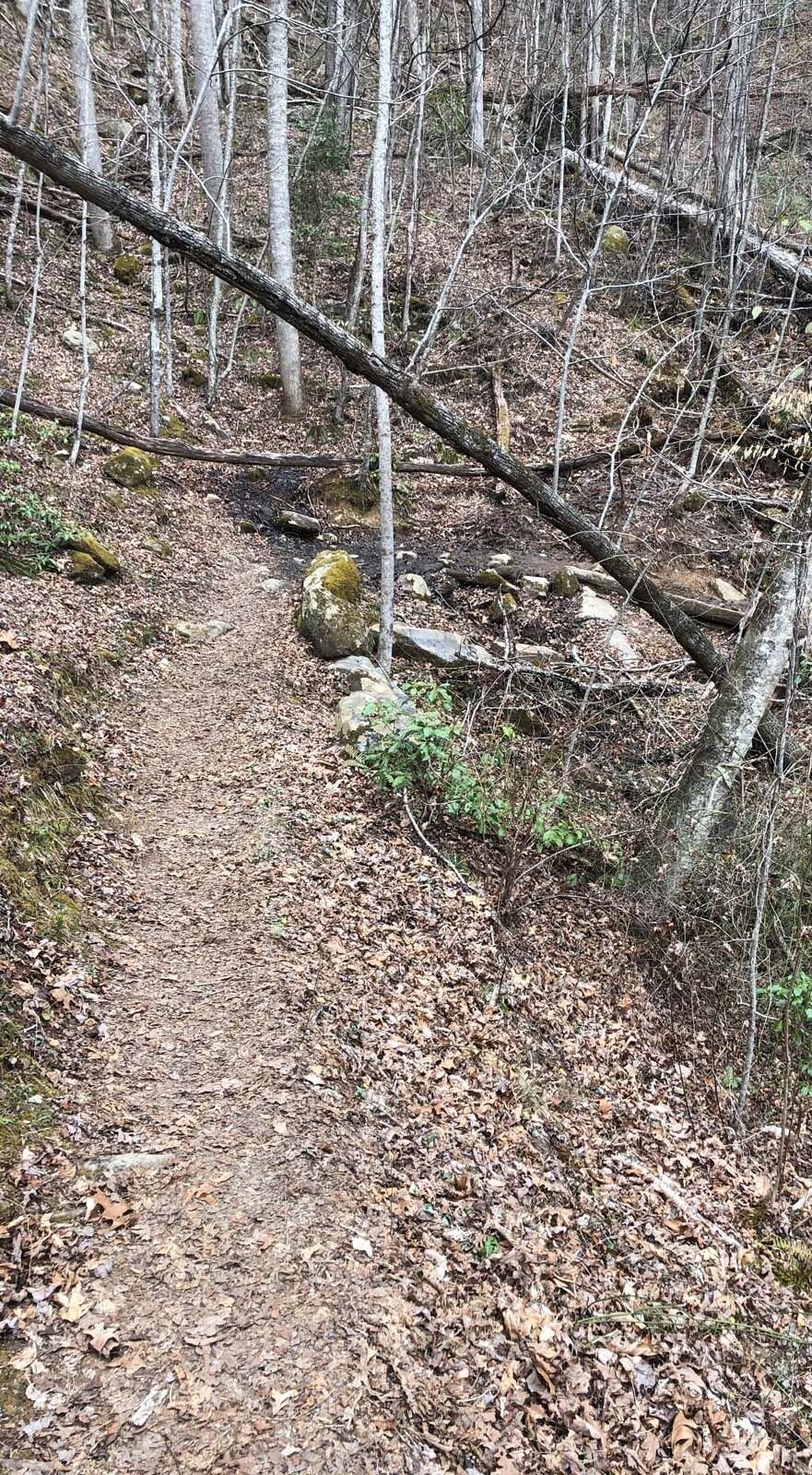 A view of the trail. 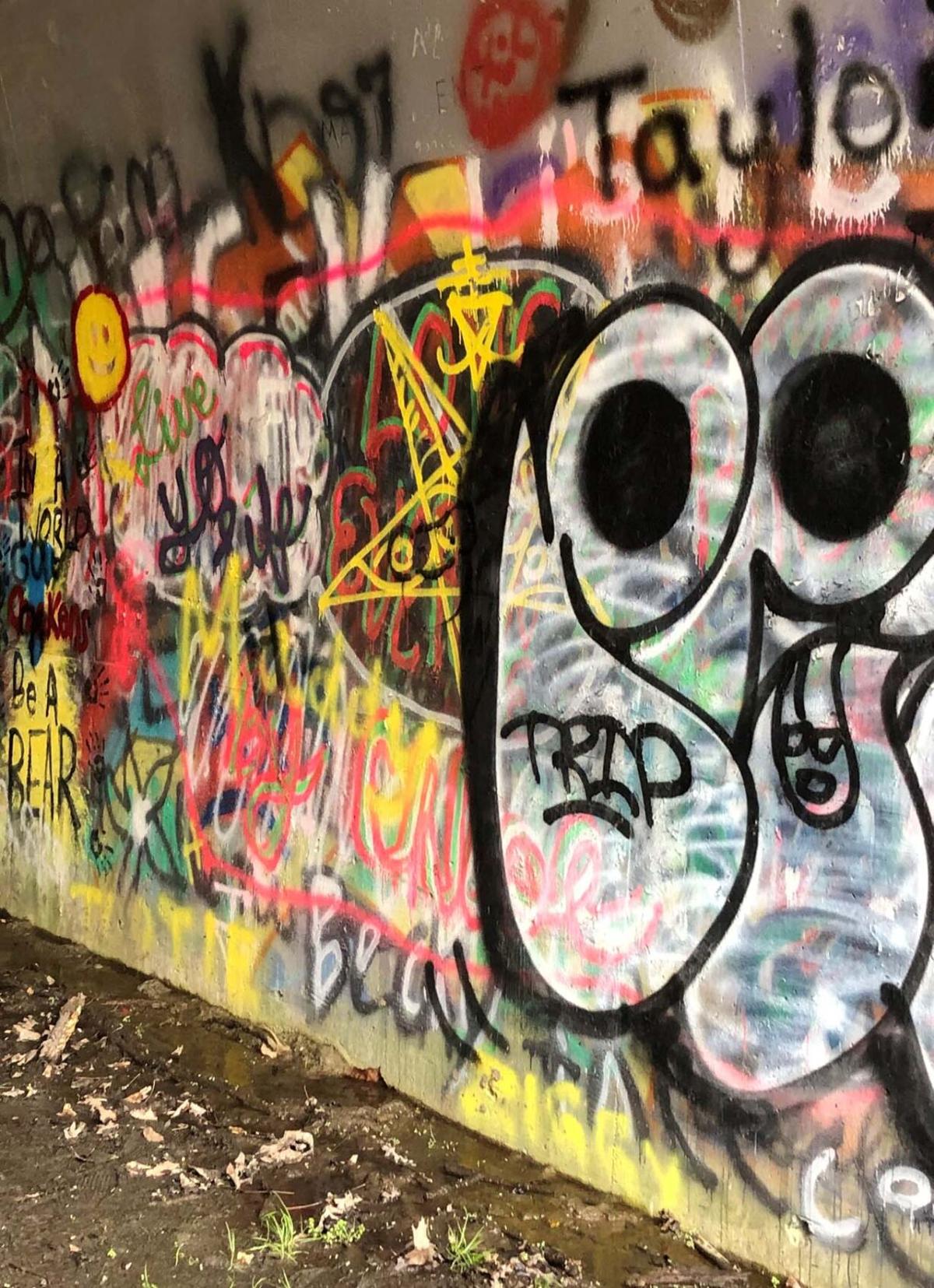 As you might imagine, the tunnel contains some interesting graffiti. 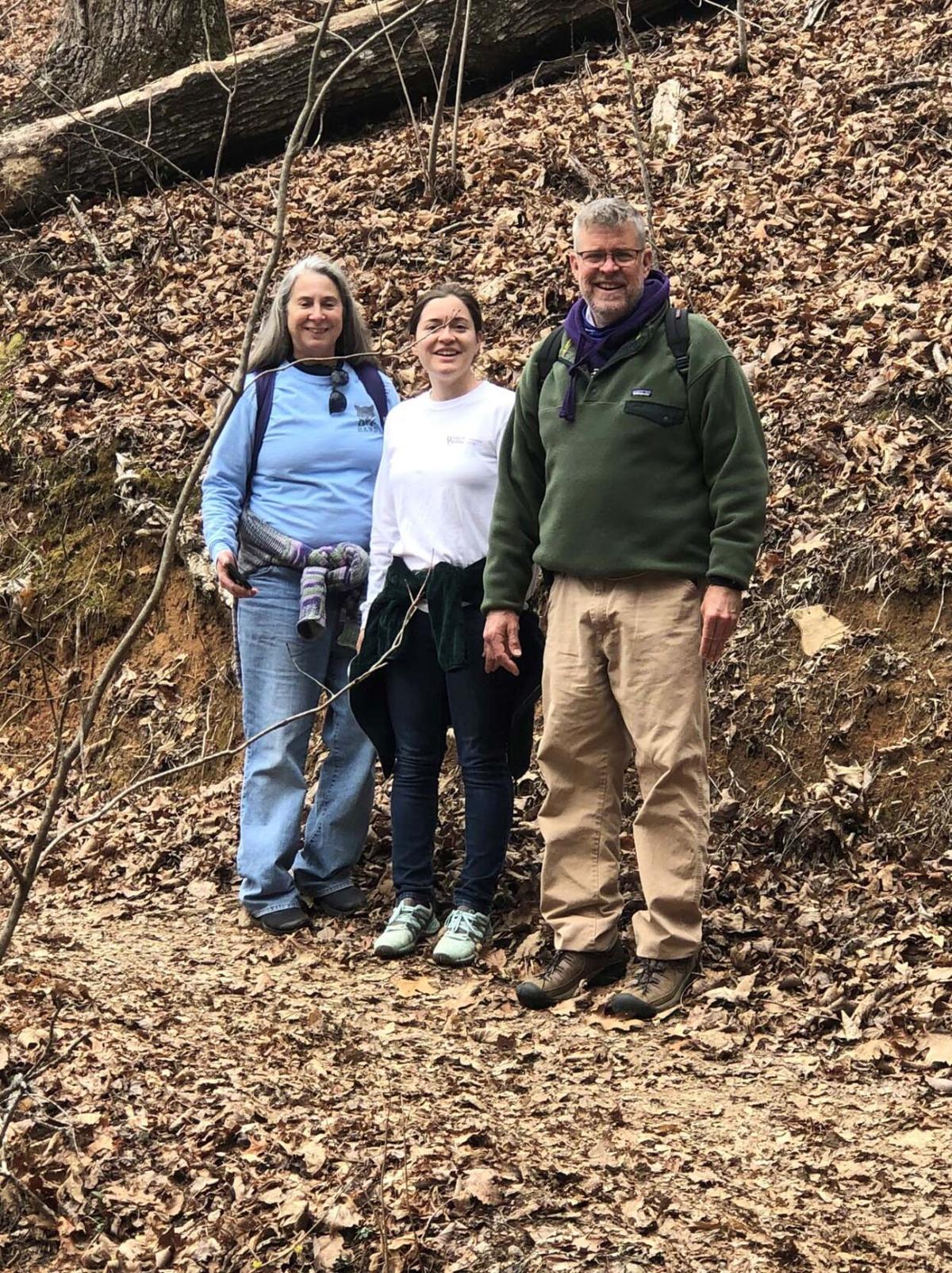 This group traveled from South Carolina to hike the trail.

Because there is a fair amount of driving involved, consider this offering as an all-day outing rather than just a hike.

Think of me as one of those fancy event organizers who puts together a perfect day that has been customized for you and your family or friends. I suggest you consider a stop for breakfast on the way and a late lunch as you head home.

There are many locations on the web and at public libraries to find the story of the “Road to Nowhere.”

It always enhances the hike if you know a little history of the area. I like to do the research because, on the day of the hike, I can recall a few facts and impart my vast knowledge to those who are with me. My hiking buddies are usually ahead of me on the trail so I can’t see their eyes roll as I freely recount fact after fact. You have to grab these little victories where you can.

In the late 1930s and early 1940s, the federal government took about 68,000 acres of private and public land that was in Swain and Graham counties in the western part of North Carolina. In anticipation of the probable upcoming war effort, the government, working with the Tennessee Valley Authority, needed the land for the primary purpose of creating a hydroelectric dam which would eventually cover the land with Fontana Lake.

Construction of the dam started in 1942 and was completed 1944. Most agree that because of the size, location and speed of completion, the creation of the lake was an engineering feat that surpassed anything of its time.

As the project developed, The National Park Service, who took possession of the tracts of land along the north shore of the lake, promised to replace the main road, soon to be under water, along the north shore with another. Supposedly, the new road would allow the people of Swain County to regain access to family graveyards.

In time, a little more than seven miles of road was constructed out of Bryson City. At the end of the road was a 1,200-foot tunnel. The bad news was that was as far as the road went. Environmental and funding problems delayed the progress for many years after the promised date. Finally, in 2007, Swain County accepted a $52 million cash settlement and dropped the demand for completion of the road.

The Road to Nowhere – Lakeshore Trail and Tunnel By-Pass

Shoes: Hiking shoes or boots will work well. There are a few wet crossings that make a shoe designed for the trail more desirable.

Time: The trail starts as an out-and-back then finishes as a loop if you hike the tunnel by-pass. We spent about two hours, but it could have been an easy 90 minutes if I had taken fewer pictures. However, had I known more about the trail; I would have chosen a different, longer route. I’ll explain in the trail section.

Distance/Elevation: My GPS had us at 3.42 miles and an elevation gain of 443 feet.

Safety: The trail is not quite a single-track, but it is narrow. We saw evidence of horses but did not encounter any on this outing. If you need to pass a horse and rider, you will have to look for a spot to get off the trail. There are no surprise curves so don’t panic. You will have time to give them room to pass.

The trail is marked, “No dogs allowed on trail,” so you may want to leave your furry friends at home. However, we did see a couple of dogs on leashes. Also, no bikes are allowed. No signs of bicycles at all.

Masking seems to be an accepted standard. We saw a few being used in tight places. Still good to have one if necessary.

Last restroom that I noted was in Bryson City.

Courtesy: The trails are getting more relaxed and friendly. I talked to several groups or couples. Most were from other states. The most distant was a couple from Alabama. They came specifically to see the tunnel. They said they were not disappointed. We were there on a weekend, but the only crowding was around the tunnel.

How to get there:On your map or app, find the Great Smokey Mountain Expressway, also known as U.S. 74. Regardless of direction of travel, the exit will be 67 into Bryson City. From the expressway, head into town.

In a short distance, turn right on Main Street. You will see the Shell station on the left before you turn. About two blocks to Everett Street. It’s a controlled intersection. Turn left on Everett. Don’t make any more turns. Stay on Everett until it winds into the mountains for about seven miles then ends. Now you know why it is called “The Road to Nowhere.”

The trail:You can’t miss the tunnel. It will be the first thing you see after you park. First few hundred feet will be on pavement.

I think you will be pleasantly surprised with your trip through the tunnel. I didn’t get any of the smells or musty feeling that I expected. It gets damp in places and it is dark in the middle so take a flashlight or your cell phone.

I’m not a graffiti fan, but the walls of the tunnel are fun to look at. It’s not the Mona Lisa but there are some interesting offerings. I’m sure you will form your own opinion. Take some time to look at it.

From the tunnel the trail starts almost immediately. For this hike follow the path straight ahead. This is the Lakeshore Trail. Once you leave the tunnel you will notice immediately how comfortable this trail is under foot. It is a well-worn dirt path that widens and narrows to fit the terrain. Rather quickly, you will pass a trail on your left that makes a hard left turn and heads steeply down the hillside. Keep it in mind. When you see it on the way back it will be the way home.

As you continue, this route will be a pleasurable roller coaster until you reach your turn-around point which should be at about a mile. You can easily fudge it a bit and do another mile or so.

Here’s the attractive option: The Lakeshore Trail goes for many miles down to and around Fontana Lake. You can make this a true out-and-back and hike this trail for three or four more miles and return on the same trail, skipping the by-pass. Just a note of caution: This is an isolated area. The trails are well worn and traveled but if you wander into an unknown area, things can get very uncomfortable, very fast. As always, research your hike before you head out.

Regardless of your choice, take some time to admire the views. Don’t be tempted by all the side trails especially when you see a sign marked “Tunnel By-Pass Trail.” It’s a little confusing because it is a tunnel by-pass but not where you want to go for this trip. Come back the same way you went out.

Remember that steep downhill trail? Now it’s on your right and also marked “Tunnel By-Pass Trail,” and an arrow pointing to the right that marks Lakeview Drive 1.6. Take it. This will be a fun walk. You can see it below as it winds along the hillside. It will curve and climb around the hillside for about a mile. Again, check out the views.

After a little climb, there will be an intersection with a signpost holding three signs. One points to the left and is marked “Lakeview Drive 0.4.” That is the one we want for today and it is a nice downhill grade all the way to the parking area. Success.

I hope to return to this area later in the year. It is known to have the most haunted trails in North Carolina. If I find a few ghosts I’ll try to get a selfie.

Biden: This is the decisive decade on climate

Biden: This is the decisive decade on climate

A rescue operation was underway shortly after 6 p.m. to extract a man who fell into a well on Saturday.

Man falls to his death in Linville Gorge

A man fell to his death Saturday in the Linville Gorge.

Local rescue workers, paramedics and firefighters all worked together Saturday evening to extract a man who fell into a well east of Marion.

A Mocksville man was killed Saturday in a motorcycle crash on Old Fort Mountain.

COLLETTSVILLE — The case of the dog that was shot outside Betsy’s Old Country Store in the Wilson’s Creek Community has gotten more complicated after another video of the incident was discovered.

A Marion man wanted on multiple drug offenses is now in custody. A local woman was also charged in connection with the investigation.

The girl, who has three siblings, was shot repeatedly and was taken to a hospital where she was pronounced dead.

She spent 4 years in a Greensboro church, seeking sanctuary. Now this Asheboro mother is home.

Juana Tobar Ortega, who has been living at St. Barnabas Episcopal Church in Greensboro since May 2017 to avoid being deported, has returned to her home in Asheboro, Siembra NC, an immigration advocacy group, said Tuesday.

Marion’s south side now has a new eatery where customers can enjoy homemade soups, salads and sandwiches in a cozy, friendly atmosphere.

The tunnel marks the end of the “Road to Nowhere” and the beginning of a pleasant hike in the hills around Lake Fontana.

A view of the trail.

As you might imagine, the tunnel contains some interesting graffiti.

This group traveled from South Carolina to hike the trail.