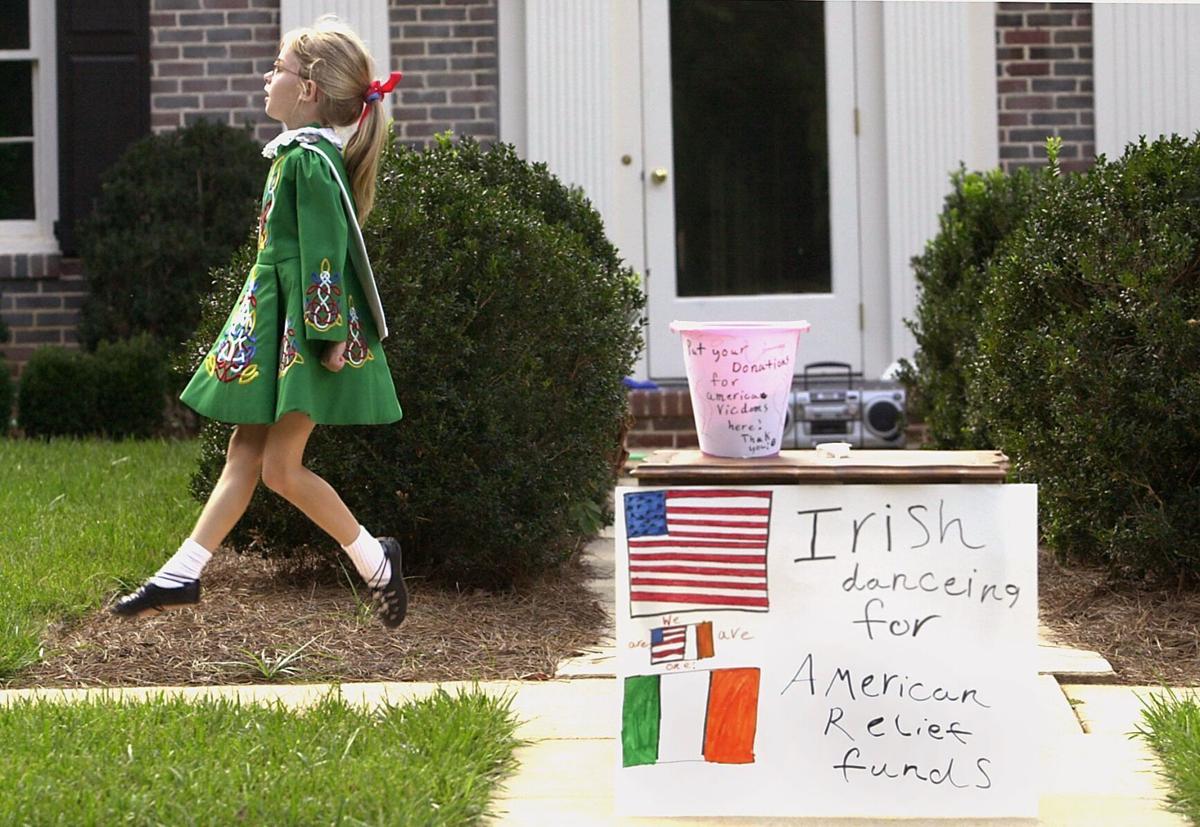 “Here comes another car, Collier! Dance! Dance!” yelled Ashley Wimmer, mother of this 9-year-old on Sept. 21, 2001. who put her well-trained Irish moves to work for a good cause. Collier Wimmer danced on the sidewalk in front of her family’s Winston-Salem home to raise money for the victims of the Sept. 11 attacks in New York and Washington. “I felt sad for the children who lost their moms and dads,” she said. 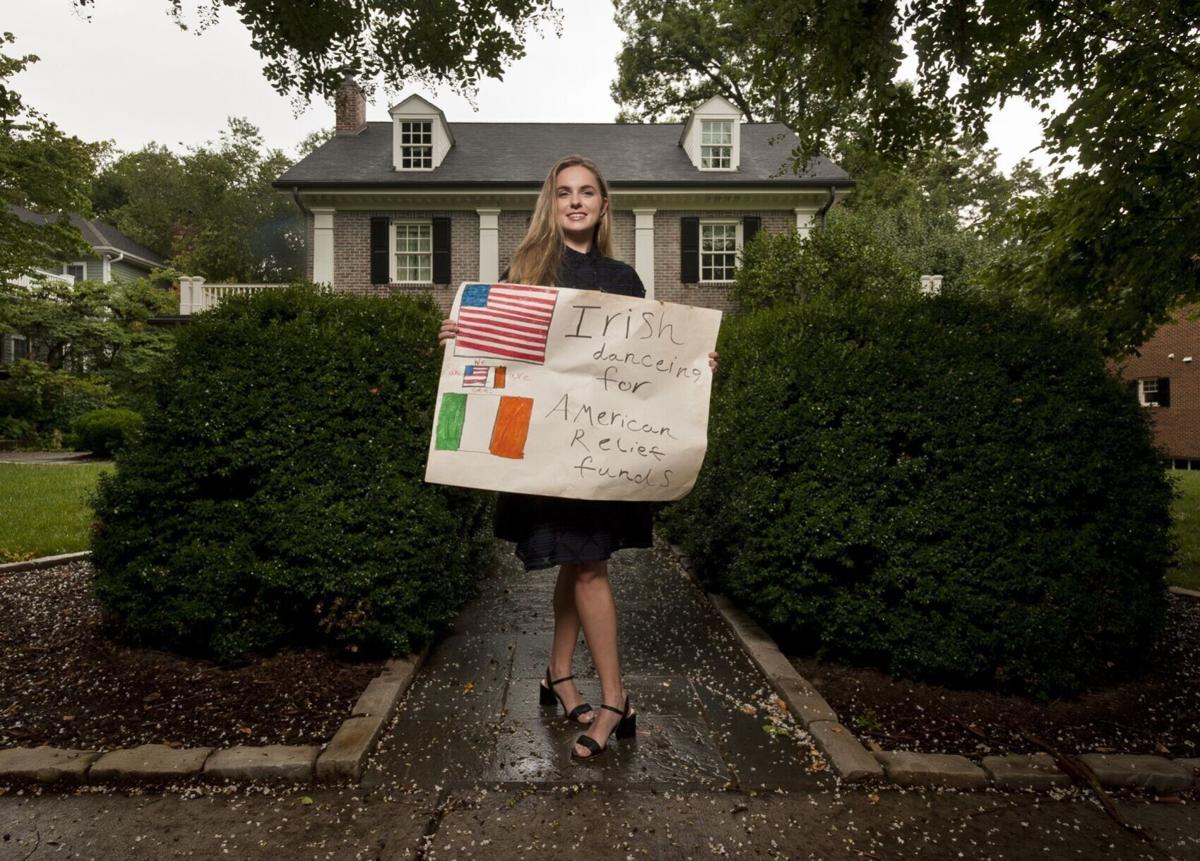 Days after the Sept. 11 attacks, Collier Wimmer was photographed by Journal photographer Ted Richardson, Irish dancing to raise funds for Sept. 11 relief. The photograph was published in many publications, and she was invited to New York to dance for the Irish president. She still has the sign 20 years later.

Ten days after 9/11, Americans were still reeling from the terrorist attacks that killed nearly 3,000 people, a sense of grief and shock lingering like the dust clouds hovering over the collapsed Twin Towers.

A little girl who lived on Arbor Road in Winston-Salem was too young to comprehend the enormity of the loss, but she could feel that people were hurting.

“What can I offer for people?” she asked herself.

Nine-year old Collier Wimmer slipped into a green dress trimmed with embroidery, pulled her hair back into a ponytail and with her arms stiffly to her side began to dance in front of a handmade sign that read: “Irish danceing for American relief funds.”

Ted Richardson, then a photographer for the Winston-Salem Journal, was on his way to another assignment when his eye caught Wimmer intently dancing in front of her parents’ home.

“As a photographer, I was definitely going to stop,” Richardson recalled. “I liked the misspelling on the poster, and I liked her focus. She had the clarity to do something simple, a little childlike innocence, but a clarity.”

The photo ran inside the Journal two days later but didn’t catch on until the Associated Press distributed it around the world.

The photo of Wimmer ran in a special edition of Newsweek, a journalism institution at the time with a circulation of more than 4 million, and on MSNBC’s website. Oprah Winfrey’s crew sent a card.

“I think people grabbed on to it,” Wimmer’s mom, Ashley Wimmer, said.

Donations and cards from around the country poured in. And for a little while, the heart and resolve of this wee Irish dancer parted the country’s veil of sadness at a time when people hungered for something to make them smile.

“I remember getting donations and heartfelt letters from Washington state, and I had to find Washington state on the map,” said Collier, who was then a third-grader at Summit School. “I didn’t understand the significance that I, and that little Irish-dancing dress, had on the community.”

The money she raised, about $1,000, went to a fund for New York firefighters.

The Irish loved it, of course. Irish America Magazine named her one of the Top 100 Irish Americans of the year, which led to an invitation to dance in front of the president of Ireland at a gala in New York City.

At the gala, she met several Irish-American firefighters who had been on the scene of the 9/11 attack at the World Trade Center.

“I was blown away that they were thankful for me, and I was like, ‘Why are you thanking me?’ I get emotional thinking about it now,” Wimmer said.

Richardson, now a freelance photographer based in Mebane, said the photo of Wimmer ranks as one of his favorite and best-known in his 25-year career.

“It was a bright spot. There were no politics. No orchestration. She didn’t expect to be photographed,” he said.

Wimmer, now 29, is a global communications specialist at Delloite and choreographs dressage freestyle, a type of synchronized dancing between rider and horse.

Her small act of kindness in the aftermath of one of the country’s darkest periods taught Wimmer a lesson that continues to guide her.

“It becomes, ‘What can I do?’ Whether you’re helping one person or a thousand. How can I continue to be something positive?” said Wimmer, who relocated to Winston-Salem during the pandemic. “I mean, look at that picture. It rippled across the country.”

As for Irish dancing?

“Occasionally, I’ll do it. I usually bring it out for St. Patrick’s Day,” she said. “I’ll always have a soft spot in my heart for Irish dancing.”

No quarantine required in Sydney for vaccinated international travelers

No quarantine required in Sydney for vaccinated international travelers

Nathan Tabor, former Congressional candidate and one-time chair of the Forsyth County Republican Party, is facing numerous criminal charges, ranging from stealing catalytic converters to making harassing and threating comments to his mother-in-law and other family members and his pastor.

"The police department cannot speak on the motive for this homicide, as the investigation is ongoing, but investigators do not believe this to be a random act nor are any further suspects being sought," authorities announced in a Monday evening news release.

One customer described a fight involving the employee and another man around 7 p.m. Monday.

October rolls around and we all start wondering when that brilliant fall foliage will follow.

N.C.'s lieutenant governor now seems to say his controversial comments were in reference to sexually explicit material he alleges “is currently in North Carolina schools." No mention was made of those books in previous complaints he lodged against public schools in North Carolina.

A Statesville pastor was arrested for a second time on sexual exploitation of a minor charges.

NC man dies in standoff with police in Winston-Salem

A man was in the house that police had surrounded on Main Street in between Garland and Avondale streets, according to WGHP/Fox 8 News, the Journal’s news gathering partner.

A child's body was secretly buried in Iredell County. High Point police have charged two people with concealing the death.

The baby boy was born in September in High Point

Stephen Roszel was preparing for his “dream job” teaching Advanced Placement government and social studies at Monacan High School this year when the Chesterfield School Board adopted a mask mandate, a move recommended by the federal Centers for Disease Control and Prevention, then required by the state.

“Here comes another car, Collier! Dance! Dance!” yelled Ashley Wimmer, mother of this 9-year-old on Sept. 21, 2001. who put her well-trained Irish moves to work for a good cause. Collier Wimmer danced on the sidewalk in front of her family’s Winston-Salem home to raise money for the victims of the Sept. 11 attacks in New York and Washington. “I felt sad for the children who lost their moms and dads,” she said.

Days after the Sept. 11 attacks, Collier Wimmer was photographed by Journal photographer Ted Richardson, Irish dancing to raise funds for Sept. 11 relief. The photograph was published in many publications, and she was invited to New York to dance for the Irish president. She still has the sign 20 years later.