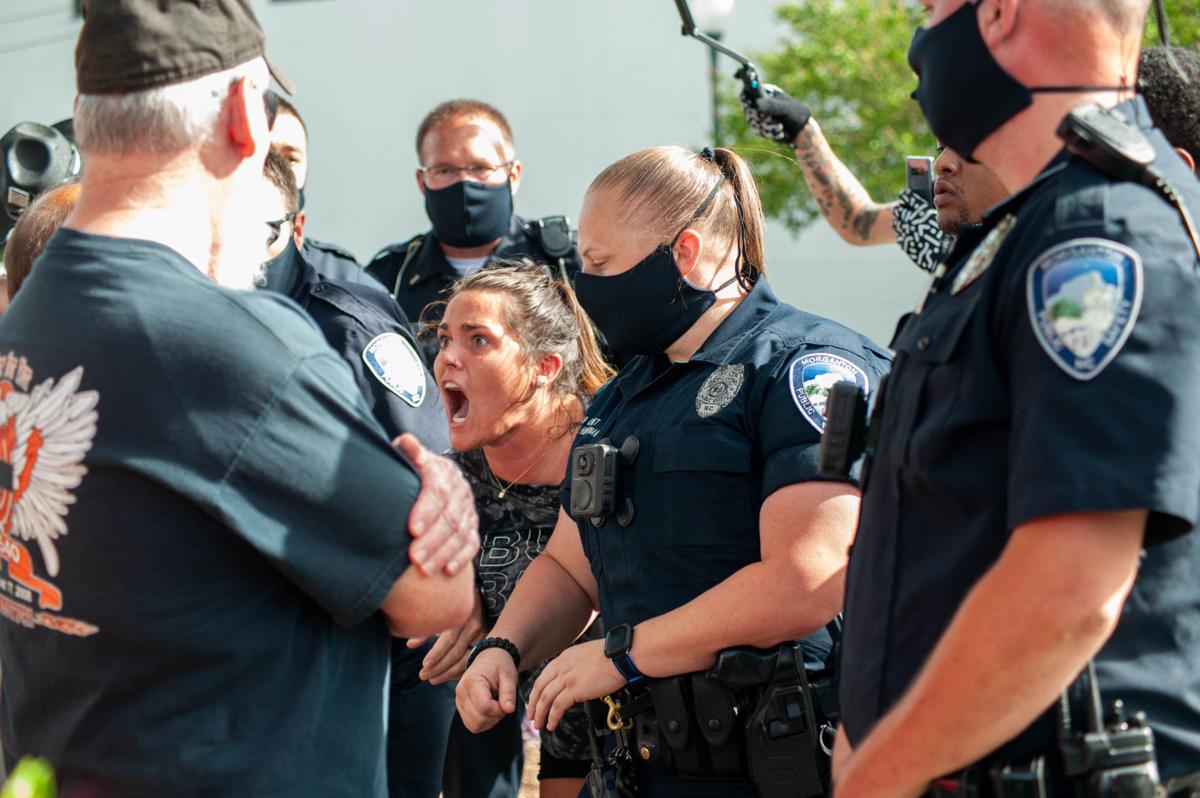 Morganton Department of Public Safety officers stand in between protesters in downtown Morganton on Saturday. 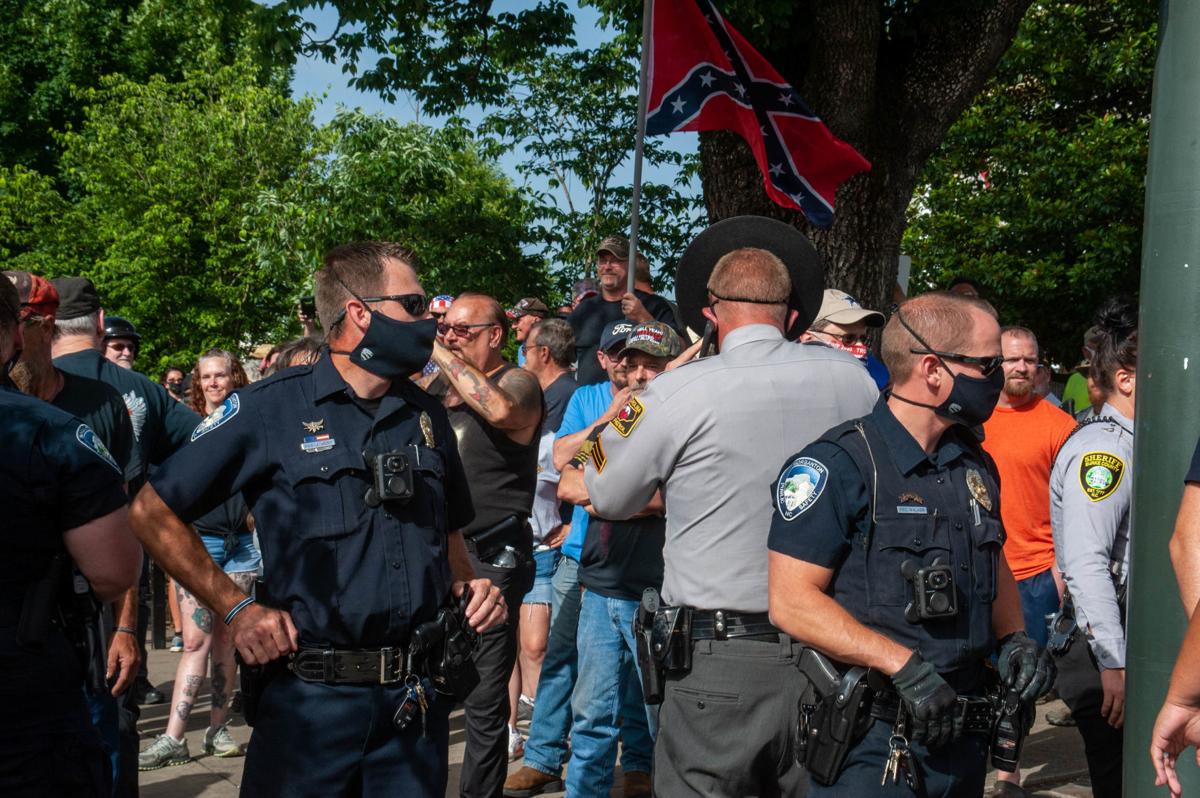 Law enforcement officers stand in between protesters in downtown Morganton on Saturday. 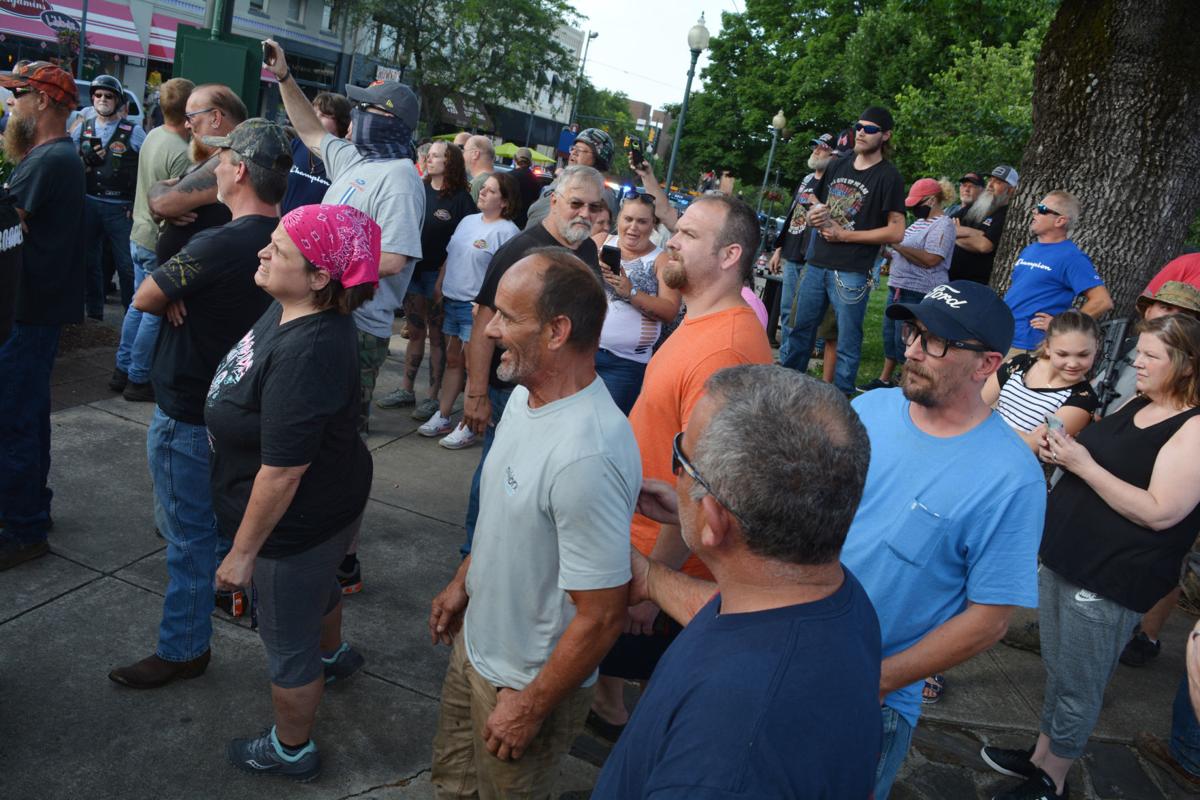 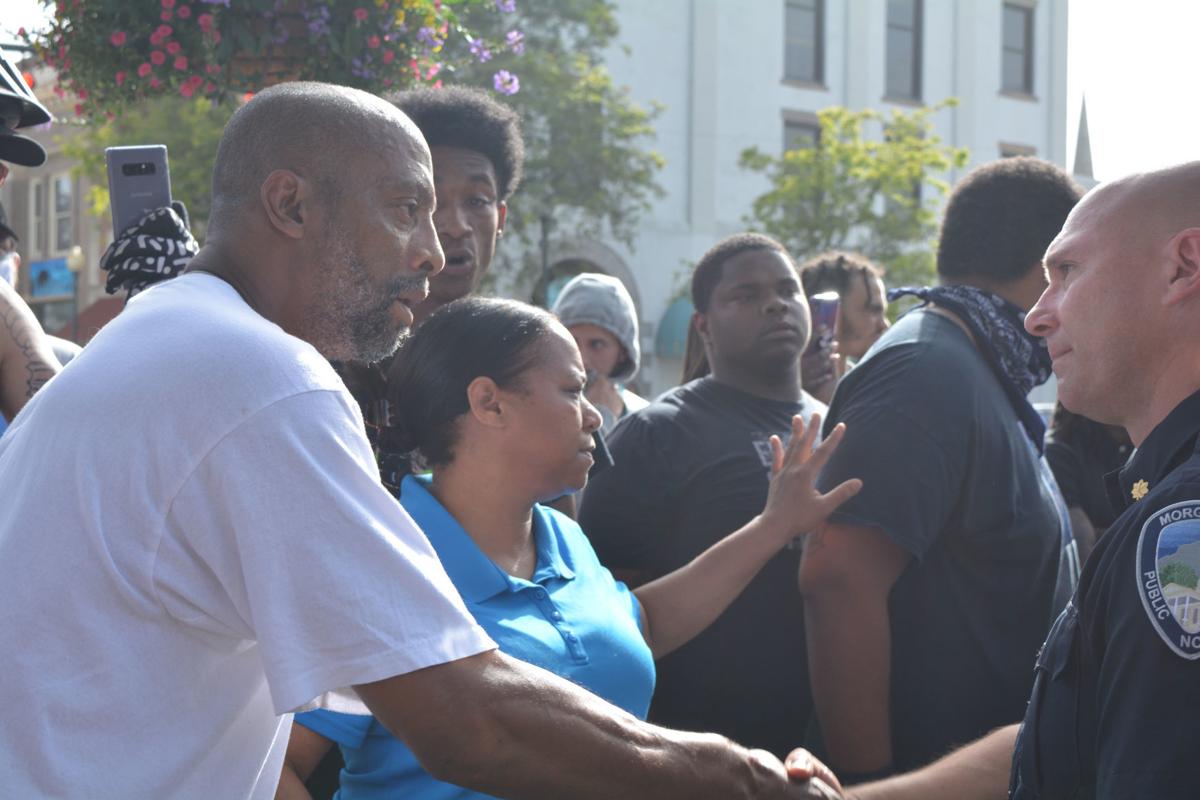 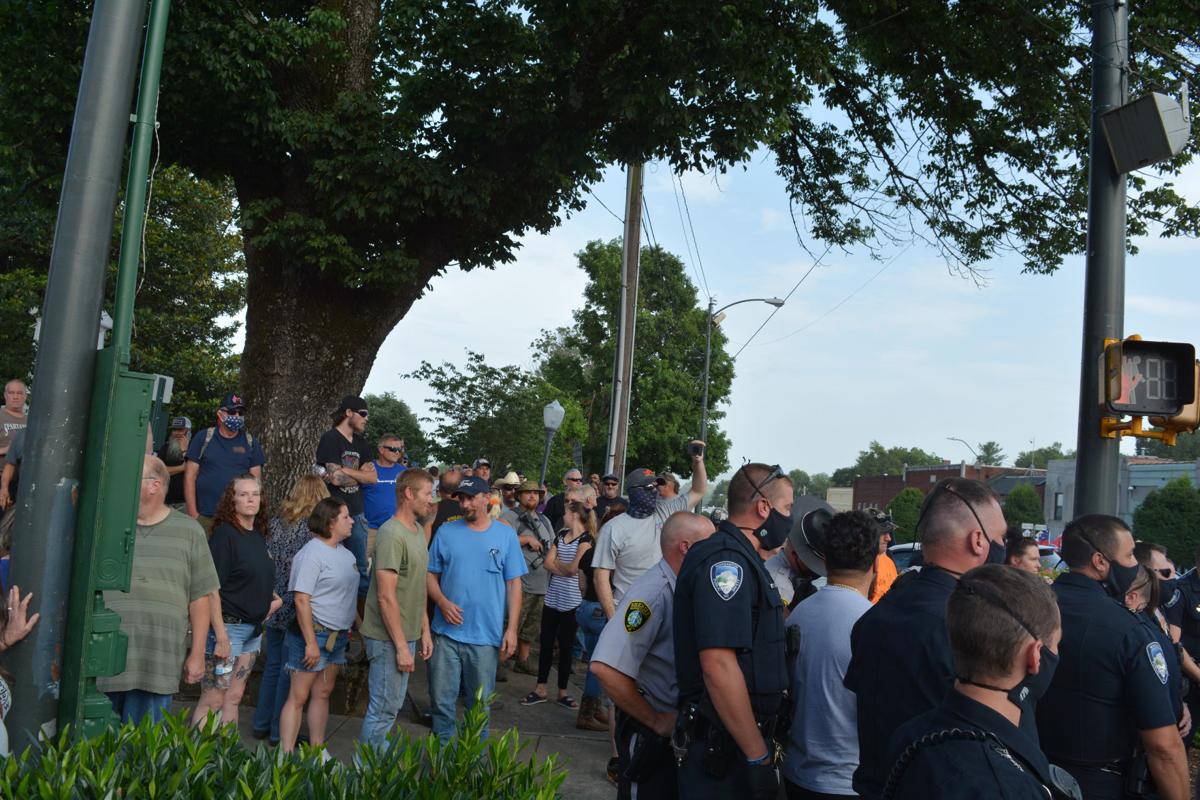 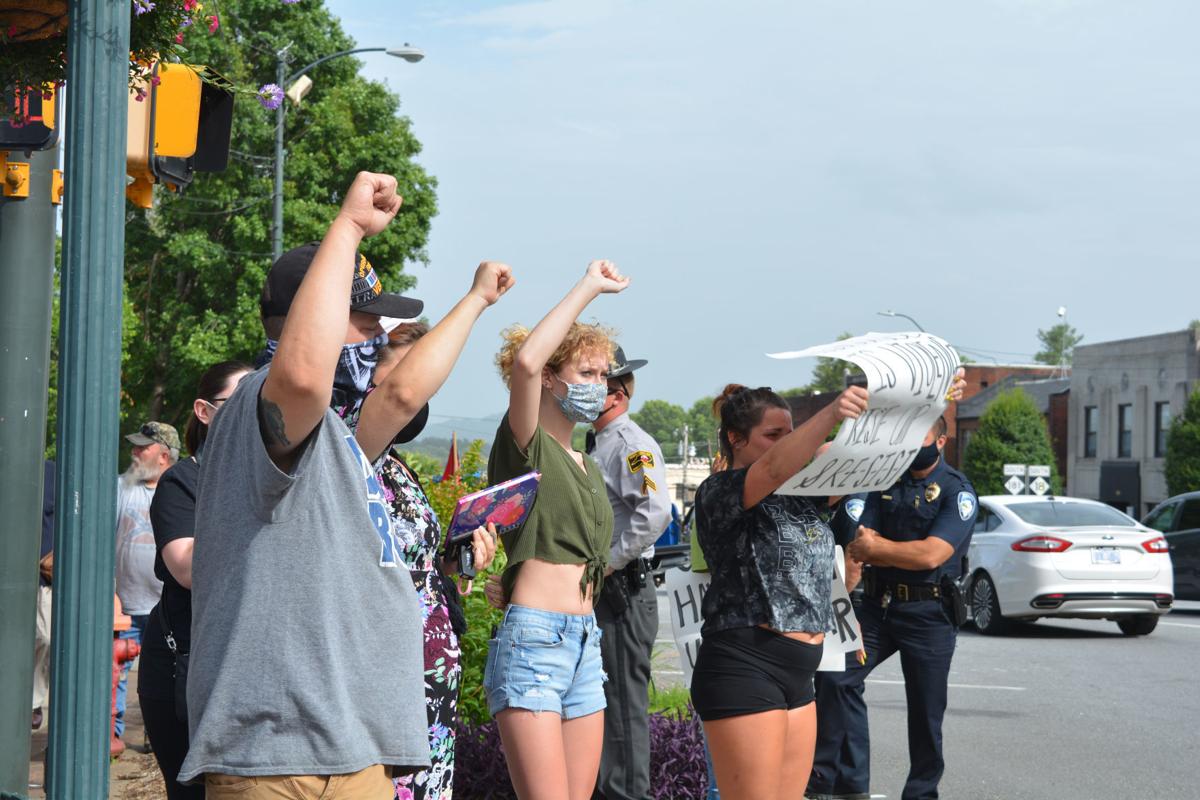 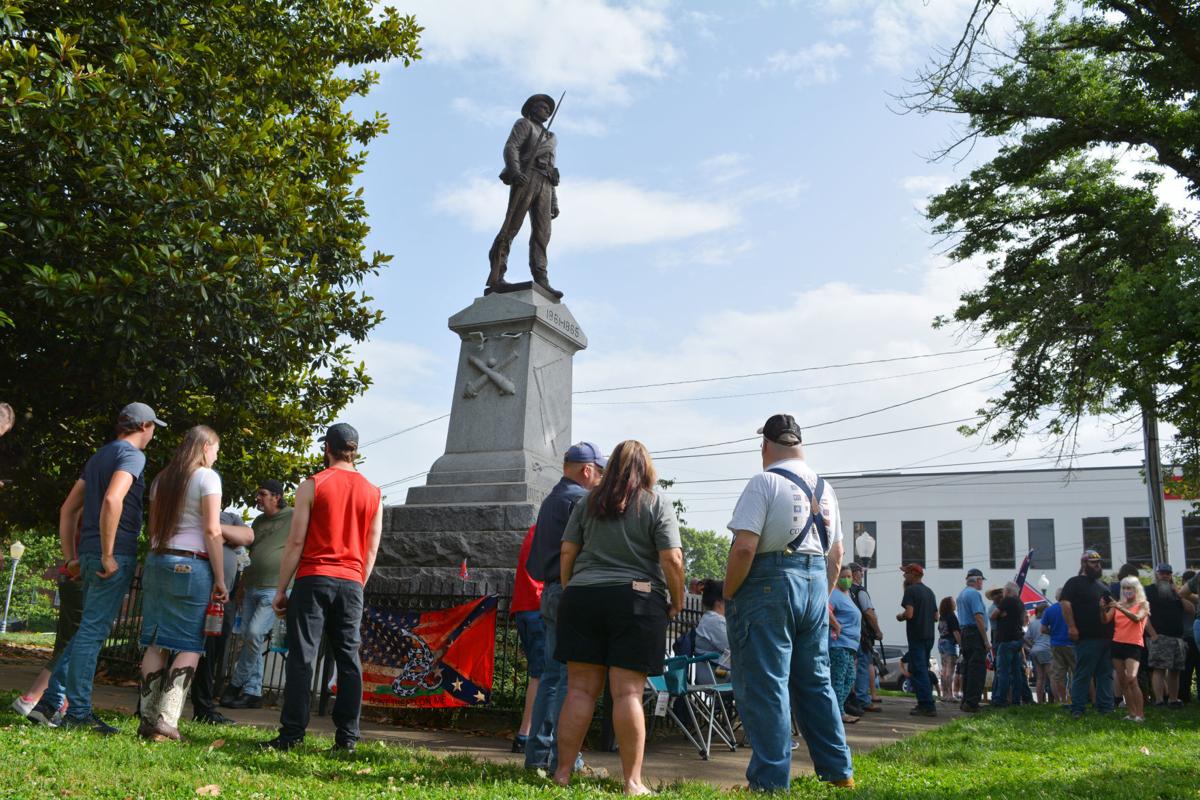 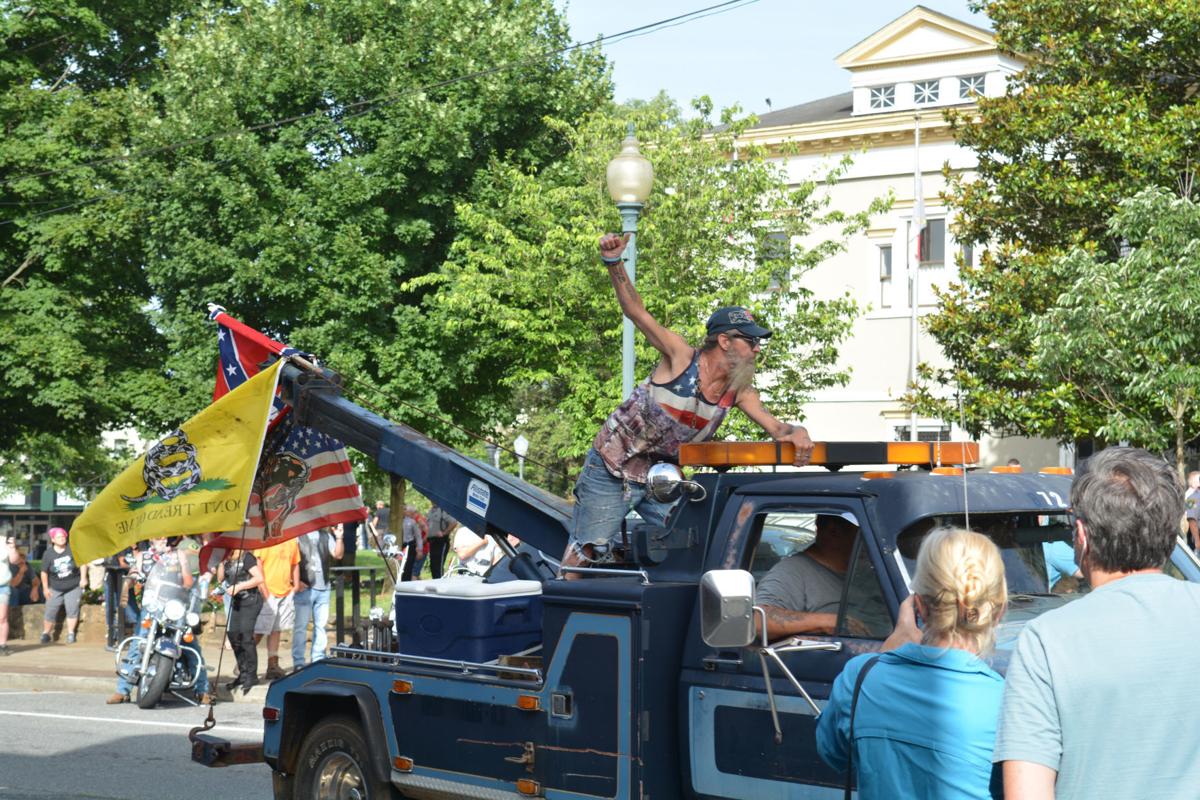 A man who stood with a group of roughly 200 people, some with guns, Saturday afternoon in downtown Morganton to protect the city’s Confederate statue asked The News Herald that while police tried to disperse a crowd of protesters gathered on and around the courthouse square.

He didn’t want to be named, but he said the protest wasn’t supposed to be like that. He said he just didn’t want anyone to tear down the statue and that he would rather see it removed legally.

“I came out here as a local business owner to help protect the county from what’s going on around the country,” he said. “I believe that these statues should be diplomatically taken down. Diplomatically, not yanked down, not spray painted, not torn down.”

The statue protectors gathered after a rumor circulated on social media that a group would be coming to Morganton to tear the statue down.

Maj. Ryan Lander with the Morganton Department of Public Safety said he had been at work for a couple of hours investigating the rumors. Police contacted federal, state and local agencies and were unable to find any credible information about them.

He and Capt. Keith Bowman decided to come down to the square to see what was going on and talk to the people that were out there. At that point, everything was peaceful.

He said one person came by, made an obscene gesture, yelled profanity toward the group surrounding the statue and started counter protesting.

Things started to escalate, and eventually there were some verbal confrontations between protesters that were headed down the path to become physical, leading police to disperse the crowd.

“It ultimately ended up with no one hurt and no one arrested and that’s what we want in the end,” Lander said.

He said he wanted to say thank you to the people who cooperated with police.

“Unfortunately, law enforcement and more specifically Public Safety is stuck in the middle of something right now and we’re going to have to see it through,” Lander said.

Capt. Jason Whisnant said he estimated there to be about 250 protesters total at the height of the event, and about 80 law enforcement officers from MDPS, the Burke County Sheriff’s Office, the U.S. Marshal’s Office, Broughton Police and the North Carolina State Highway Patrol.

A woman, who also didn’t want to be named, who came to counter protest the statue protectors said she was concerned that, at previous Black Lives Matter protests, they weren’t allowed near the statue, but this group was.

“Whenever we try to have our peaceful protests, we couldn’t stand near the monument,” she said. “We had to stand right here on the corner. Whenever they were doing their little protest and they had their rifles and their ARs and all that, it’s okay for them to walk around, but as soon as our protesters from our Black Lives Matter come up here with their guns, that’s when everybody wants to get offensive.”

Holly Dale said she and her friend who is black came to counter protest. She said as soon as they stepped onto the pavement, her friend was called derogatory words.

She said, speaking on behalf of the group she was present with, there were no plans to take the statue down.

“Nobody is worried about the statue,” Dale said. “The statue is just a representation of history and that’s what we’re trying to avoid, police brutality is such an issue, and it may not be as big of an issue in Morganton as it is across the world but it’s still a problem.”

Jimmy Barber, a Vietnam war veteran, said he didn’t want to start any trouble, but he wasn’t going to let the statue be torn down.

He said he felt like “the left” and the protesters who are “rioting, burning and killing” are taking over the United States.

“I’m a patriot,” Barber said. “I always have been, I always will be. I will run from trouble if I can, but somebody’s got to take a stand, somewhere, somehow.”

He said he had been at the protest for a while.

“I don’t understand the police making people who are peaceful leave,” Barber said. “Those people, they don’t seem to have any control over the people who are protesting and want to tear the statue down.”

A man who would only identify himself as Thomas but said he was a second lieutenant of the Burke Tigers said he and about 10 others from his group came out to protect the statue after they received threats against Confederate flags they have standing along Interstate 40 at either end of the county, and had heard reports of plans to tear down the statue.

“I think we had about 10 members here and we stayed back towards the monument,” Thomas said. “It is a shame that this escalated to the point that it did.”

He said he was born and raised in North Carolina.

“I never thought I would see the day where North Carolinians would call for the destruction of their heritage,” he said.

He said he didn’t know the motives of the counter protesters, whether they were there to tear the statue down or just have their voices heard, but that he thought it was a shame.

Chris Hogue said last year, when there was a group surrounding the statue with Confederate flags, he was the only black man to come counter protest.

“How can y’all let this happen?” Hogue said. “We just had a Black Lives Matter march around this same block like a week ago, and now y’all just up here letting these people come up here with guns and let these people do this racist [expletive], Confederate [expletive] [expletive], and let it be okay and it’s not cool. It’s not cool at all.”

He said he came out to show his support, and that he didn’t think movements like the one seen with people carrying guns around the statue needed to happen.

“I’m just up here to stand up for my people,” Hogue said. “Because this ain’t right.”

Morganton Department of Public Safety officers stand in between protesters in downtown Morganton on Saturday.

Law enforcement officers stand in between protesters in downtown Morganton on Saturday.