Five alumni of UNC School of the Arts said in a news conference Monday that they were emotionally and psychologically scarred when faculty members in the 1980s sexually abused them and administrators did nothing to stop it.

They and two other alumni filed a lawsuit in Forsyth Superior Court last week, alleging that administrators at one of the country’s top arts conservatories condoned a pervasive culture of sexual abuse and exploitation over a 20-year period, starting in the 1970s. The alumni who filed the lawsuit all attended the high school at UNCSA in the 1980s.

They are represented by Gloria Allred, a California attorney known for representing sexual abuse victims of Harvey Weinstein, Bill Cosby and R. Kelly. She is being assisted by a local law firm led by Greensboro attorney Lisa Lanier.

Begun in the 1960s, UNCSA is one of the country’s top arts schools. It has five conservatories — dance, film, design and production and music — on one campus, which has both a high school and college program.

One of the plaintiffs, named Christopher (the Winston-Salem Journal is identifying the plaintiffs by their first name, except for Christopher Soderlund, who previously sued UNCSA in 1995), said faculty members groomed him for sexual abuse when he was 16 and it took years before he realized that what they did was wrong. In fact, he said, he convinced himself that he was to blame for allegedly seducing two older faculty members.

In a taped statement shown via Zoom, Christopher looks at pictures that show him as a young boy. Many of the other plaintiffs had pictures of themselves as students in the background as they appeared live at the news conference via Zoom.

Christopher said faculty members who sexually abused him and others told the students they controlled the students’ future. In the lawsuit, he alleges that one of his ballet teachers, the late Duncan Noble, sexually abused him both in class and at Noble’s home. He also alleged that two other faculty members, the late Richard Kuch and Richard Gain, made sexually inappropriate comments during classes.

The abuse happened at the height of the HIV/AIDS crisis, and he said he saw many of his classmates later die from AIDS before they were 30. Throughout his adult life, Christopher said he was psychologically damaged as he grappled with sexual abuse that he once believed was normal.

“I am broken and have been for decades,” he said.

Other alumni said the abuse they suffered led to life-long mental health issues. One plaintiff named Terence said he attempted suicide twice. Some abandoned careers in the arts because of what happened to them at UNCSA.

Soderlund claims in two separate lawsuits — one that he filed in 1995 and in the current one — that two dance instructors, Kuch, who was an assistant dean of the School of Dance, and Gain, manipulated him into a forced sexual relationship and then later belittled him. He feared that reporting the abuse and rejecting their advances could adversely affect his education at the arts school and his future professional career, the lawsuits alleged. Soderlund said he went to several administrators and faculty members, all of whom failed to do anything and said there was nothing wrong with the abuse. One, the late Duncan Noble, told him that he would have had sex with Soderlund, the lawsuit said.

Gain is named as a defendant in the current lawsuit. 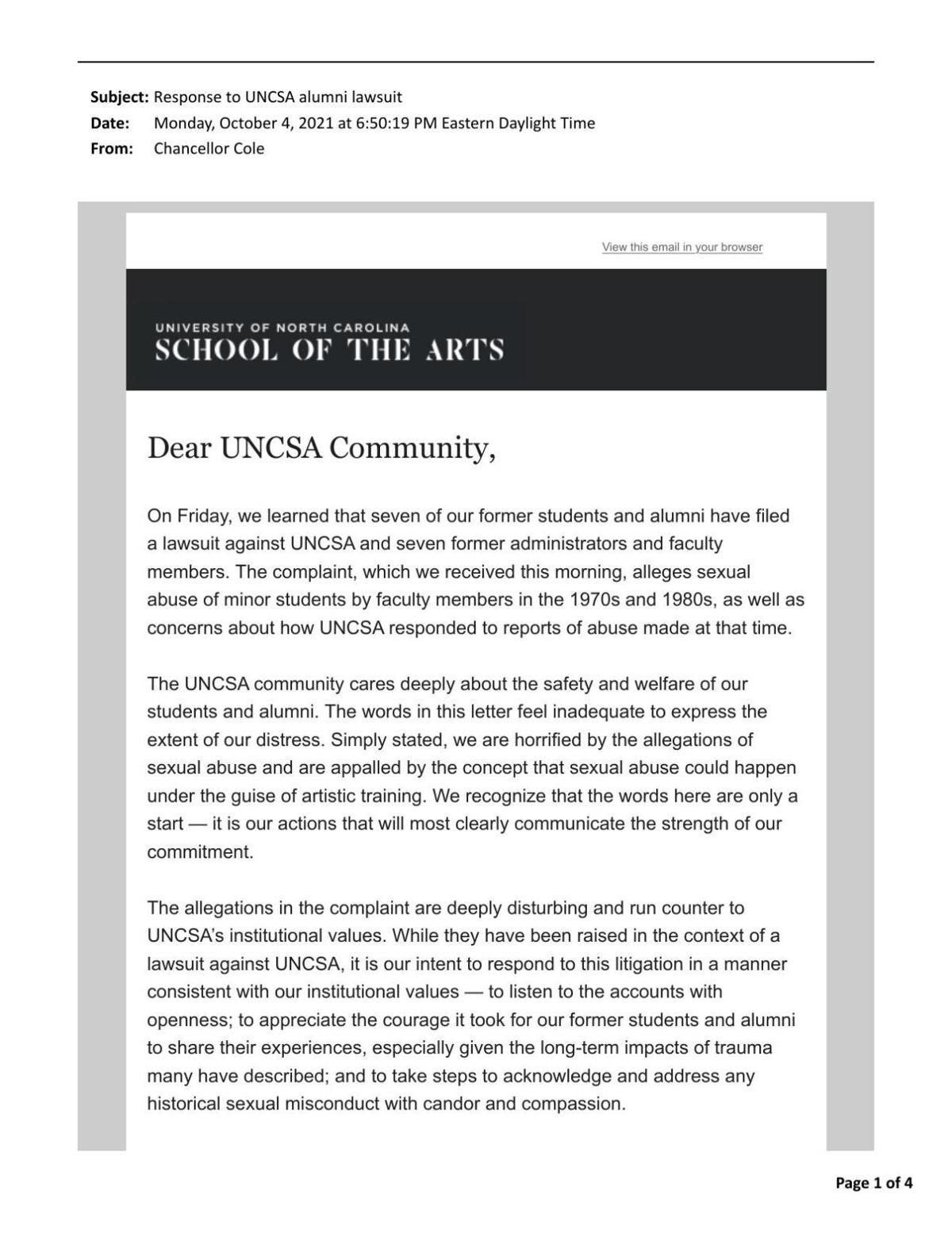 UNCSA’s chancellor Brian Cole, who was officially installed Friday, issued a lengthy statement late Monday to the school’s community in response to the lawsuit.

“Simply stated, we are horrified by the allegations of sexual abuse and are appalled by the concept that sexual abuse could happen under the guise of artistic training,” Cole said. “We recognize that the words here are only a start — it is our actions that will most clearly communicate the strength of our commitment.”

Cole said that the allegations run counter to the school’s institutional values and promised that officials will listen to the accounts “with openness” and to “appreciate the courage it took for our former students and alumni to share their experiences.”

But Cole also added that the recommendations stemming from a commission formed in light of Soderlund’s 1995 complaint have been put in place, including a 1996 UNC systemwide policy against improper relationships between students and employees.

Cole said that society’s understanding of child sexual abuse, the impact of power dynamics and how institutions can protect underaged children have evolved over the past several decades, but nothing excuses the sexual misconduct alleged in the lawsuits.

He said UNCSA is not the same institution it was in the 1970s and 1980s and has done several things, including establishing a Division of Institutional Integrity with a full-time director of Title IX and a chief compliance officer, providing clear systems for reporting abuse, and providing resources.

“UNCSA stands with all survivors of abuse of any kind and remains committed to the values of trust and integrity on our campus and beyond,” Cole said.

The commission that Cole mentioned in his statement released a report in November 1995 that found “no substantial basis” for believing that UNCSA’s chancellor and top administrators “failed to act properly” on allegations of sexual abuse, a (Greensboro) News & Record article reported in 1995.

The panel suggested that reports of widespread sexual misconduct had been exaggerated but acknowledged that some arts administrators failed to do all they could when confronted with possible improper sexual misconduct among faculty, the 1995 article said.

The Charlotte Observer reported Monday that it had uncovered evidence that accused faculty members continued to work on campus, some for several years after the 1995 investigation.

The paper cites a previously unpublished document that shows 24 staff members were accused of harassing or having relationships with students and that, out of the 13 who were still working at the school in 1995, 12 of them continued working there for several years after the investigation. Five faculty members are still listed on the school’s roster, the article said.

And five faculty members who were accused told the Charlotte Observer that they were never told of accusations against them or given a chance to defend themselves.

Allred and Lanier said the lawsuits would not be possible without the SAFE Child Act, a law passed in 2019, that made it easier for adult victims of child sexual abuse to file civil claims. The law provides essentially a two-year window to file such claims. That window will close on Dec. 31.

“All I want is justice and want everyone to know that students have access to that justice thanks to the SAFE Child Act,” Allred said at the news conference.

Lanier said 33 states either have similar laws or pending legislation that provide the opportunity for adult victims of childhood sexual abuse to file claims. These laws are necessary, she said, because often it takes years for victims to realize that they were abused and to report that abuse.

Lanier said she wants to hear from witnesses who have information about sexual abuse at UNCSA.

“We want to uncover every piece of information,” she said.

The lawsuit alleges that there are several hundred potential former students who could join the class-action complaint.

Many of the accusations center on Kuch and Gain, who, according to the lawsuit, “made no secret of their efforts to have sexual relationships with UNCSA’s minor students and were widely known to groom boys as young as 12 and 13 years old with the full and open intent of engaging in sexual activity with these adolescent students.”

Kuch and Gain, the lawsuit alleges, groped, fondled and touched many of their female and male students in sexually inappropriate ways. They told students constantly that they needed to have sex in order to become better dancers, the lawsuit said.

In many cases, they lured students to their farm in East Bend, which was known by a sexually-explicit name. One faculty member told then-Vice Chancellor William “Bill” Pruitt that he had trouble recruiting young male dancers to UNCSA because of Kuch and Gain. The faculty member was Gyula Pandi, according to a 1995 Winston-Salem Journal article. The lawsuit said Pruitt did nothing about Pandi’s allegations.

The alleged abuse also was not limited to the dance department. The lawsuit claims that the then-Dean of the Drama School, who is unidentified, had a practice called “Freshman Friday,” where he would have all the male freshmen come into his office. Once there, he would fondle the boys, causing them to have an erection.

The lawsuit said a group of graduate film students sought 13-year-old female students so they could take their virginity and that the then-dean of students was told about this practice but did nothing.

Sexual relationships between faculty and high-school age students was widely known by UNCSA administrators, and if a male faculty member got a young female student pregnant, the only help the school might offer her is information about how to obtain an abortion, the lawsuit said.

Another plaintiff named Elizabeth said faculty members deceived her, fueling fears that she might not be invited back to the high school program if she told anyone about the abuse. Another plaintiff, also named Elizabeth, said her teachers sexually abused her on a daily basis and that, as an adult, she suffered trauma-related chronic illnesses that spanned 30 years. She said she could no longer drive a car or maintain consistent employment.

Mary, also a plaintiff, said at the news conference that the sexual abuse she experienced established a painful pattern for the rest of her life.

“I can honestly said this damage has deeply and negatively impacted every relationship and every job I’ve ever had,” she said. “This should never have happened to me or any other child at UNCSA. It was wrong and it must never happen again.”

Nathan Tabor, former Congressional candidate and one-time chair of the Forsyth County Republican Party, is facing numerous criminal charges, ranging from stealing catalytic converters to making harassing and threating comments to his mother-in-law and other family members and his pastor.

"The police department cannot speak on the motive for this homicide, as the investigation is ongoing, but investigators do not believe this to be a random act nor are any further suspects being sought," authorities announced in a Monday evening news release.

One customer described a fight involving the employee and another man around 7 p.m. Monday.

Stephen Roszel was preparing for his “dream job” teaching Advanced Placement government and social studies at Monacan High School this year when the Chesterfield School Board adopted a mask mandate, a move recommended by the federal Centers for Disease Control and Prevention, then required by the state.

October rolls around and we all start wondering when that brilliant fall foliage will follow.

NC man dies in standoff with police in Winston-Salem

A man was in the house that police had surrounded on Main Street in between Garland and Avondale streets, according to WGHP/Fox 8 News, the Journal’s news gathering partner.

A Statesville pastor was arrested for a second time on sexual exploitation of a minor charges.

Lake Norman High School students were sent home early today due to a skunk in the building.

10-year-old Virginia girl who died of COVID had been assigned to walk sick students to school nurse's office, mom says

A Suffolk child who died of COVID served as class "nurse," her mother wrote, walking all the sick children to the clinic.