On Friday, the N.C. Supreme Court censured former District Court Judge Randy Pool for violations of the North Carolina Code of Judicial Conduct and “for conduct prejudicial to the administration of justice that brings the judicial office into disrepute.”

The censure relates to sexual misconduct. In the document from the state Supreme Court, it states that Pool had been diagnosed by his doctor with early stage dementia, which sometimes leads to "a lack of control of sexual impulses."

A censure is a formal statement of severe disapproval or public condemnation.

By the recommendation of the North Carolina Judicial Standards Commission, the issue before the state Supreme Court was whether Pool, who served as a District Court judge for District should be censured for violations of the North Carolina Code of Judicial Conduct, and pursuant to for conduct prejudicial to the administration of justice that brings the judicial office into disrepute.

The violations made by Pool include:

• Engaging in sexual misconduct while serving as and exploiting his position as chief judge of his judicial district through a pattern of predatory sexual advances towards numerous women in his community, many of whom were involved in matters pending in the district where respondent served as chief judge

• Making material misrepresentations to the Commission during an investigation

• Sending inappropriate electronic communications and exchange of nude photographs resulted in an extortion attempt by one woman, which led to an investigation by law enforcement agencies.

In the fall of 2019, Jennifer Tierce was charged with one count of felony extortion. Tierce allegedly threatened to send copies of sexually explicit texts and photographs from conversations between Pool and herself if Pool did not pay her $5,000. 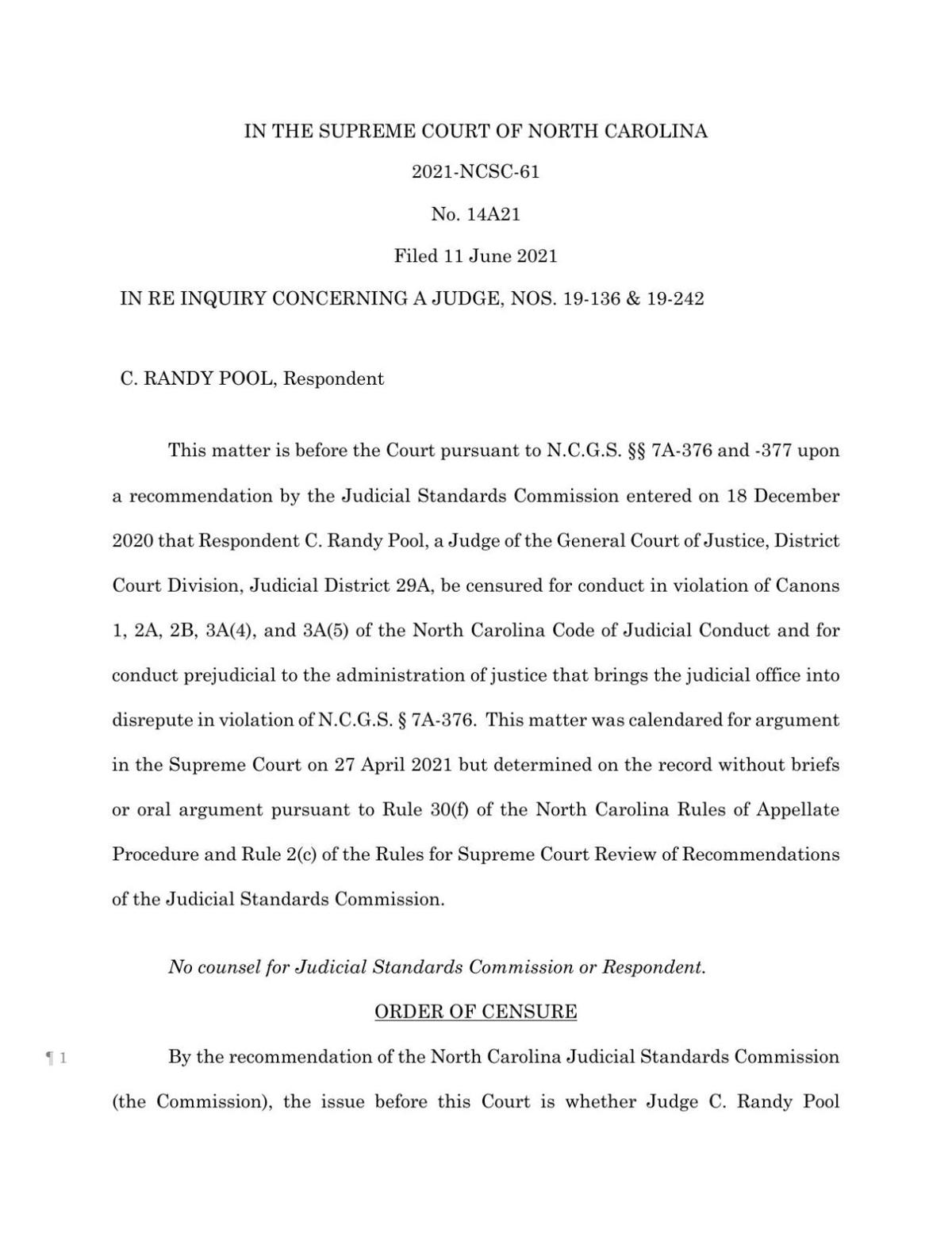 The censure order from the state Supreme Court talks about Pool’s inappropriate use of Facebook.

“Although some of (Pool’s Facebook) messages have been deleted, a review of Respondent’s existing FB messages during the period from November 2018 to May 2019 shows that Respondent, who is married, knowingly and willfully initiated and engaged in conversations with at least 35 different women that ranged from inappropriate and flirtatious to sexually explicit,” reads the censure order. “In some cases, Respondent and the female also had telephone conversations, exchanged texts and had personal meetings (including in some cases sexual encounters). Respondent knowingly and willfully engaged in FB conversations of a sexual nature with 12 women during the period from at least November 2018 through July 2019…”

The order also states that he “also made either inappropriate or flirtatious comments through FB messages to women who were required to appear or work in Respondent’s court in their professional capacities.”

It goes on to state that from November 2018 to May 2019 Pool engaged in extensive Facebook activity, including posts, comments and private messages, while he was reported as being in court. His Facebook records also established that he “routinely sought to arrange personal meetings with women he contacted on FB either during breaks and recesses from court, before court convened or immediately after court adjourned.”

“Court personnel assigned in (Pool’s) courtroom in McDowell County regularly observed that Respondent was frequently on his cell phone while on the bench and would often ‘disappear’ during recesses and lunch breaks, and that Respondent would often recuse in cases where the stated reason appeared to be very tenuous, and at other times would continue cases at such a high rate that it would make their jobs more difficult.”

From November 2018 through May 2019, Pool communicated, via Facebook, through inappropriate messages with at least 16 additional women, often seeking photographs of them or sharing photographs of himself. In addition, respondent had ex parte discussions through Facebook regarding pending proceedings in his district.

The censure order states that Pool “had enjoyed a long and distinguished career as a judge of his district for almost twenty years.”

“As Chief District Court Judge, Respondent made a number of significant contributions to the administration of justice during his 13 years in that position,” the order states. “Upon being named Chief Judge, Respondent immediately instituted a Continuance Policy for his district that all judges followed and successfully eliminated significant back log in his district. Respondent also created a new Truancy Court for McDowell and Rutherford County at least twelve years ago where he and his colleagues volunteered their time after court to meet with parents, grandparents and students to emphasize and encourage students to stay in school, be present each day, and to work hard to get a good education. Respondent has also actively been engaged in his community. . . “

Furthermore, the order states that Pool “has also undertaken significant efforts to determine the cause of his sexual misconduct and to address the problems in his personal life.”

His primary care physician conducted a physical examination in early October 2020 and ordered an MRI, which showed mild atrophy or shrinkage of the front and the left temporal lobes of his brain. An evaluation by a physician resulted in a diagnosis of early stage frontotemporal dementia, a disease which can manifest itself through a lack of control of sexual impulses, according to the censure order.

“Respondent agrees that based upon the nature of his misconduct and his recent diagnosis of early signs of dementia, he will not seek a commission as an emergency judge or a retired recall judge, nor will he attend future judicial conferences or continuing judicial education (CJE) programs offered to judges of the State of North Carolina,” reads the order.

“In addition, because respondent is no longer a sitting judge and has agreed not to serve as such, while taking into account respondent’s eighteen years of distinguished service as a judge and respondent’s expression of remorse, we agree that censure is appropriate,” reads the order.

A postal worker is facing a federal indictment for destruction and delaying the mail in McDowell County.

Report: Deputies find a Marion woman with a child at the scene of a break-in

A Marion woman took her baby along to a break-in, authorities said on Tuesday.

A community divided: Three decades later, West Marion does not have a connecting bridge

More than 30 years ago, the construction of a bypass around Marion meant a great amount of traffic and congestion would finally be diverted fr…

41 McDowell residents test positive for COVID in one week. Another person dies

COVID-19 is taking its toll on those passing up vaccinations.

Western North Carolina workers voiced their demands for a $15 an hour minimum wage Tuesday at the Hardee’s on N.C. 226 South in Marion.