Two males and a female were caught on camera at the most recent theft reported on Nov. 11. A Marion man is offering a $300 reward for information leading to the identity of the suspects. 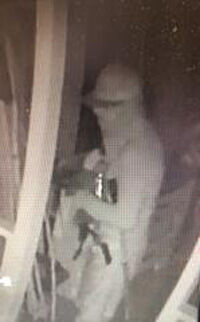 A Marion man is offering a $300 reward for information leading to the identity of the suspects that have stolen from his property on N.C. 226A twice.

Two males and a female were caught on camera at the most recent incident reported on Wednesday, Nov. 11.

The homeowner told deputies that someone broke into the residence between 12 p.m. on Monday, Nov. 9, and 10:30 a.m. on Nov. 11 and took a Honda motorcycle, a TV, various hand tools, two machetes, a game camera and computer equipment.

This was the second report. On Thursday, Oct. 29, the same man told authorities that someone broke into a building on the N.C. 226A property between 12 p.m. on Saturday, Oct. 24, and 1:30 p.m. on Oct. 29 and removed two generators, power tools, a tool box, four chain saws, an air compressor, three weed trimmers, assorted hatchets, antique tools and other small household items.

It is believed that the same suspects could have also stolen a dark brown 16-foot astroglass boat and boat trailer belonging to a man on nearby Lawrence Hollifield Drive.

Anyone with information concerning the crimes or suspects is asked to call Detective Jesse Hicks at 652-2237 or McDowell County Crime Stoppers at 65-CRIME (652-7463). You can also text your tips to Crime Stoppers. Text TIP MCDOWELLSO and your information to 888777. With Crime Stoppers, your identity remains anonymous, and you could receive a cash reward.

McDowell County Sheriff’s Office investigators are on the hunt for a stolen motorcycle.

Hickory police officers are looking for a Marion who is a person of interest in a suspicious fire in Hickory.

Two males and a female were caught on camera at the most recent theft reported on Nov. 11. A Marion man is offering a $300 reward for information leading to the identity of the suspects.