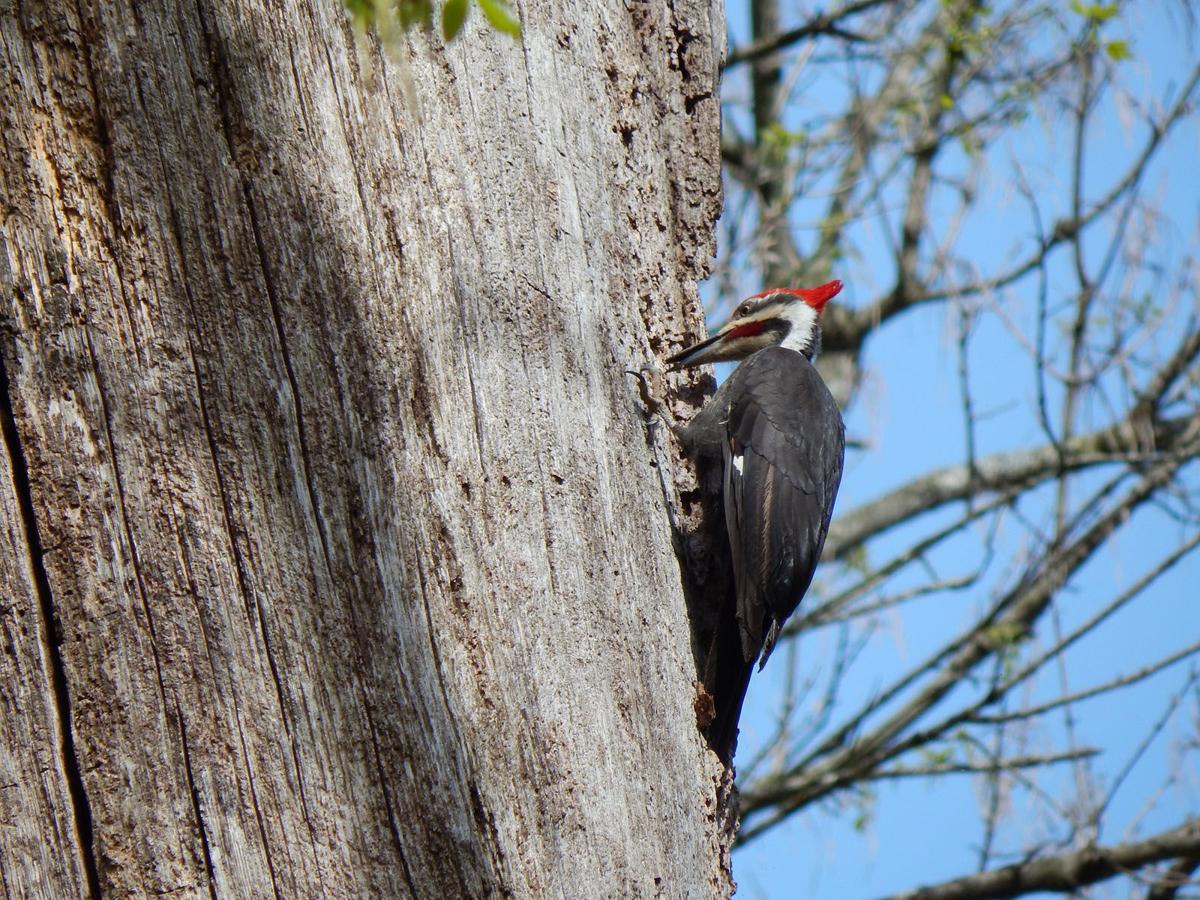 Male and female look similar with a black and white body and a bright red crest on the head. 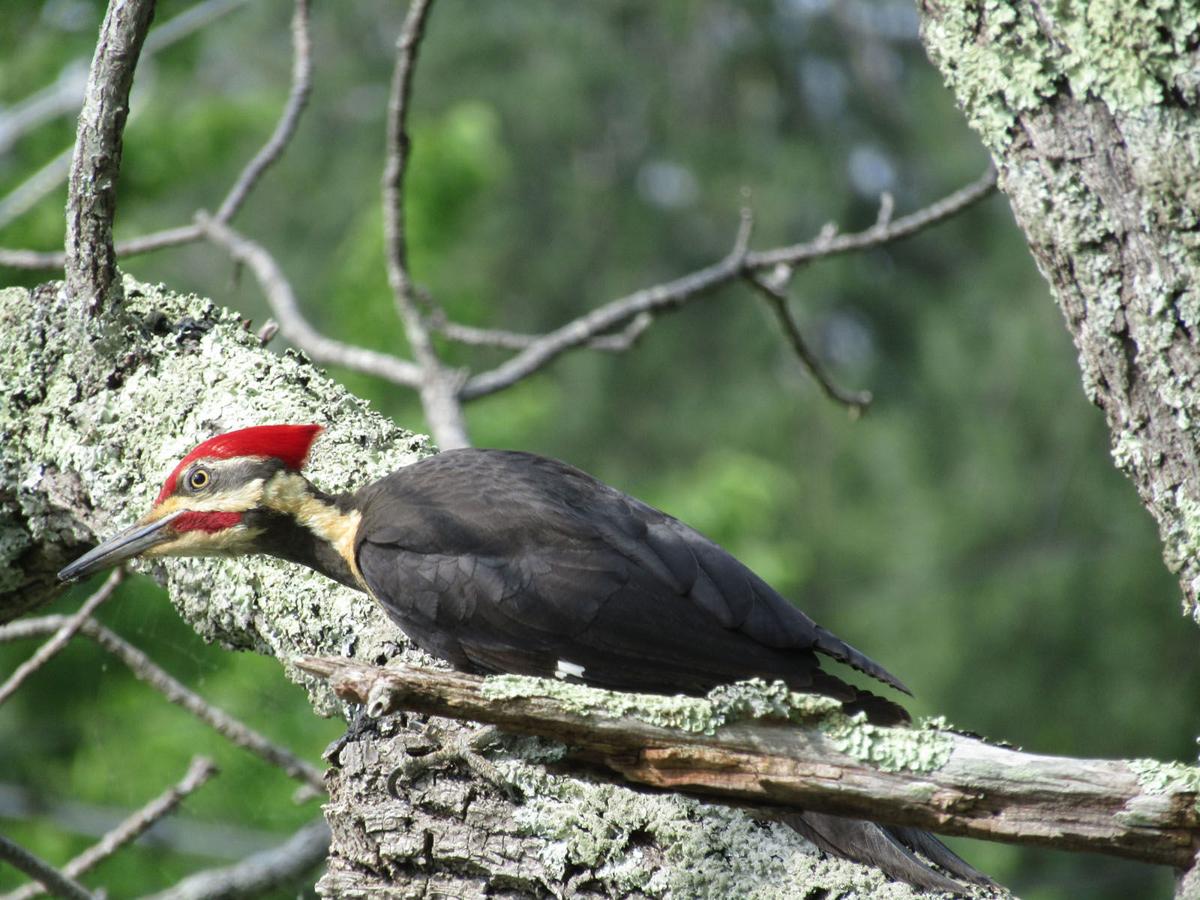 Both male and female pileated woodpeckers sport a red crest, or cap, which inspired the bird’s common name. The term “pileated” comes from from the Latin “pileatus,” meaning "capped.”

I heard the raucous antics of the large woodpecker before I saw it. A large pileated woodpecker had landed in the upper branches of a wild cherry tree near the creek that runs past my home. From spring to summer, the leaves of the tree provide green shelter for a variety of songbirds. During the winter, the tree is a stark outline against the winter sky and offers no concealment — not that a bird as large as a pileated woodpecker — it’s the size of a crow — would find it easy to hide itself.

One thing’s certain. A sighting of a pileated woodpecker never fails to impress. This bird has a loud, raucous cackling call, which is often heard before the bird is observed. This woodpecker spends a good amount of its time low to the ground, so when one takes flight unexpectedly, often calling loudly as its powerful wing beats carry it away from an observer, the moment can be somewhat startling. These experiences of sudden and unexpected sightings of one of these woodpeckers is often accompanied by exclamations of surprise. Hence common names such as “wood-hen” and “Lord God Bird” have been adopted for these woodpeckers. Other names for the pileated have included carpenter bird, cock-of-the-woods and wood-hen.

Although the pileated woodpecker can reach a length of 19 inches, the bird weighs only about 11 ounces. Male and female look similar with a black and white body and a bright red crest on the head. In fact, the term “pileated” in the species’ name comes from the Latin “pileatus,” meaning “capped.” Males show a red stripe — or mustache — on the cheek that is not present in females.

As mentioned earlier, the pileated woodpecker often can be found low to the ground, foraging on tree stumps and fallen logs, as well as in taller, living trees. The reason for this behavior rests with one of its favorite foods — the humble carpenter ant. The pileated is not the only woodpecker that supplements its diet with ants. For instance, the Northern flicker is also fond of dining on these insects. Studies conducted on the dietary preferences of pileated woodpeckers have revealed that as much as 40 percent of the diet is made up of ants. Some pileated woodpeckers appear to have developed quite an addiction for ants with some individuals dining almost exclusively on ants. These woodpeckers also eat wild fruits and nuts, as well as other insects and their larvae. The pileated woodpecker will occasionally visit a feeder for suet or seeds, but I’ve not had much luck overcoming their instinctive wariness.

Pileated woodpeckers — usually a mated pair — have been among my wild neighbors for years, but they are shy, retiring birds. Despite their bold appearance and capacity for making quite a racket, the pileated woodpecker usually otherwise goes out of its way not to attract attention to itself. Because of this, close-up observations of the largest of our woodpeckers are experiences to savor.

The bird’s enthusiastic ability to excavate cavities in rotten trees is a boon to other species of birds. Certain species of ducks as well as owls, bats, squirrels and other species of wildlife will often make use of cavities created by pileated woodpeckers for roosting locations or to raise their own young.

Worldwide, there are about 180 different woodpeckers, but the family is conspicuous in its absence from Australia, Madagascar and New Zealand. The pileated woodpecker ranges across the North American continent, with birds present in the forests across Canada and the eastern United States as well as certain areas along the Pacific coast.

The business news you need

With a weekly newsletter looking back at local history.

Americans Think They'll Need 8.5 Months to Feel Financially Comfortable After COVID-19. Here's How to Get There Sooner

If you're feeling financially insecure, a few moves could change your outlook for the better.

Americans are rapidly shrinking their credit card debt during the pandemic

Today’s definition of financial adulthood is more flexible than ever

The financial milestones of adulthood used to be pretty clear-cut: 30-somethings were expected to get married, buy a home and have children. Things have changed.

Though the public is desperate for relief, here's why it may not happen.

No more paper returns when your situation changes.

Waiting for Another Stimulus Check? Here Are 5 Things You Need to Know

There's some good news and some bad news when it comes to potential government relief related to the coronavirus pandemic.

This Is the Average Age Workers Started Saving for Retirement

Not making this investing move could cost you big time.

Still Waiting for Your 2019 Tax Refund? You May Be Surprised Your Check Is a Little Bigger Than Expected

The IRS has made an announcement that entitles you to extra money.

The outbreak of the coronavirus has dealt a shock to the global economy with unprecedented speed. Following are developments Thursday related …

Male and female look similar with a black and white body and a bright red crest on the head.

Both male and female pileated woodpeckers sport a red crest, or cap, which inspired the bird’s common name. The term “pileated” comes from from the Latin “pileatus,” meaning "capped.”