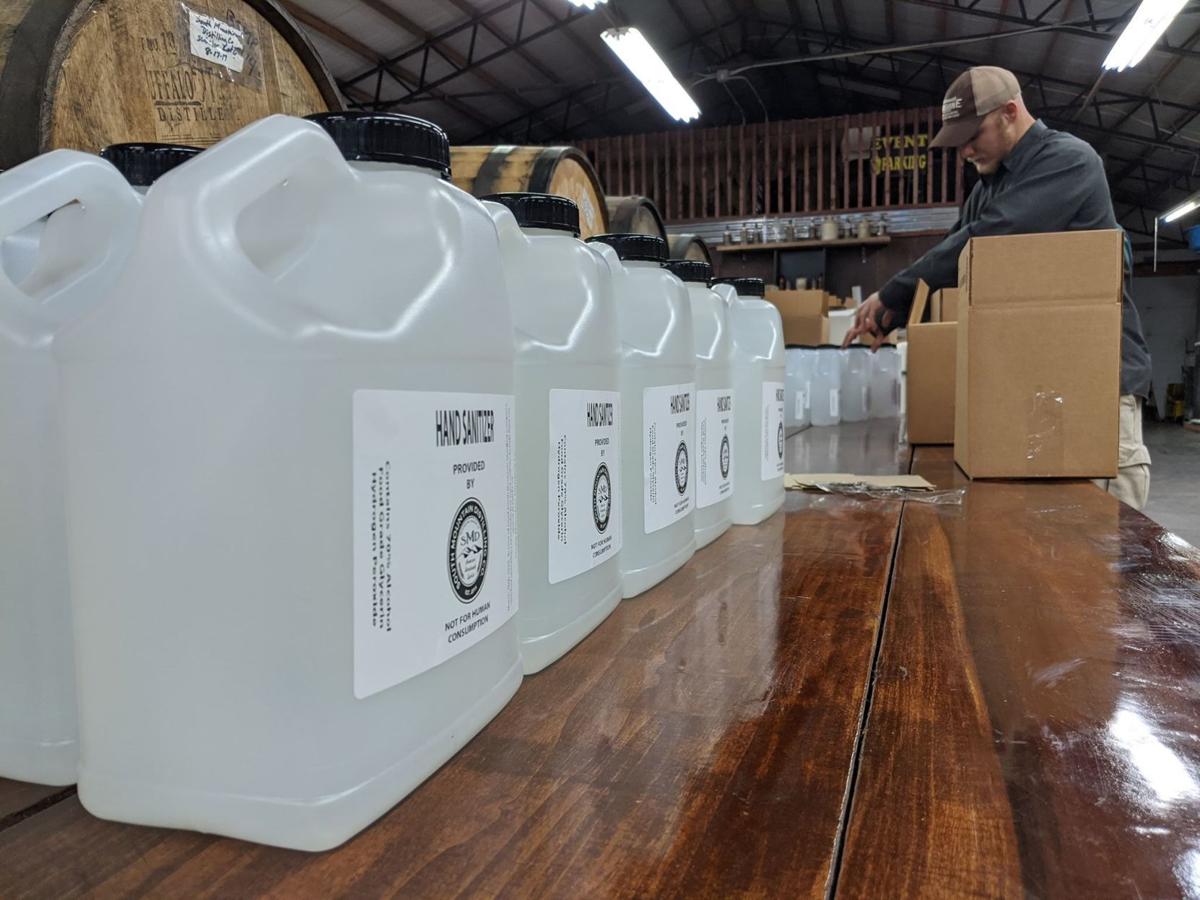 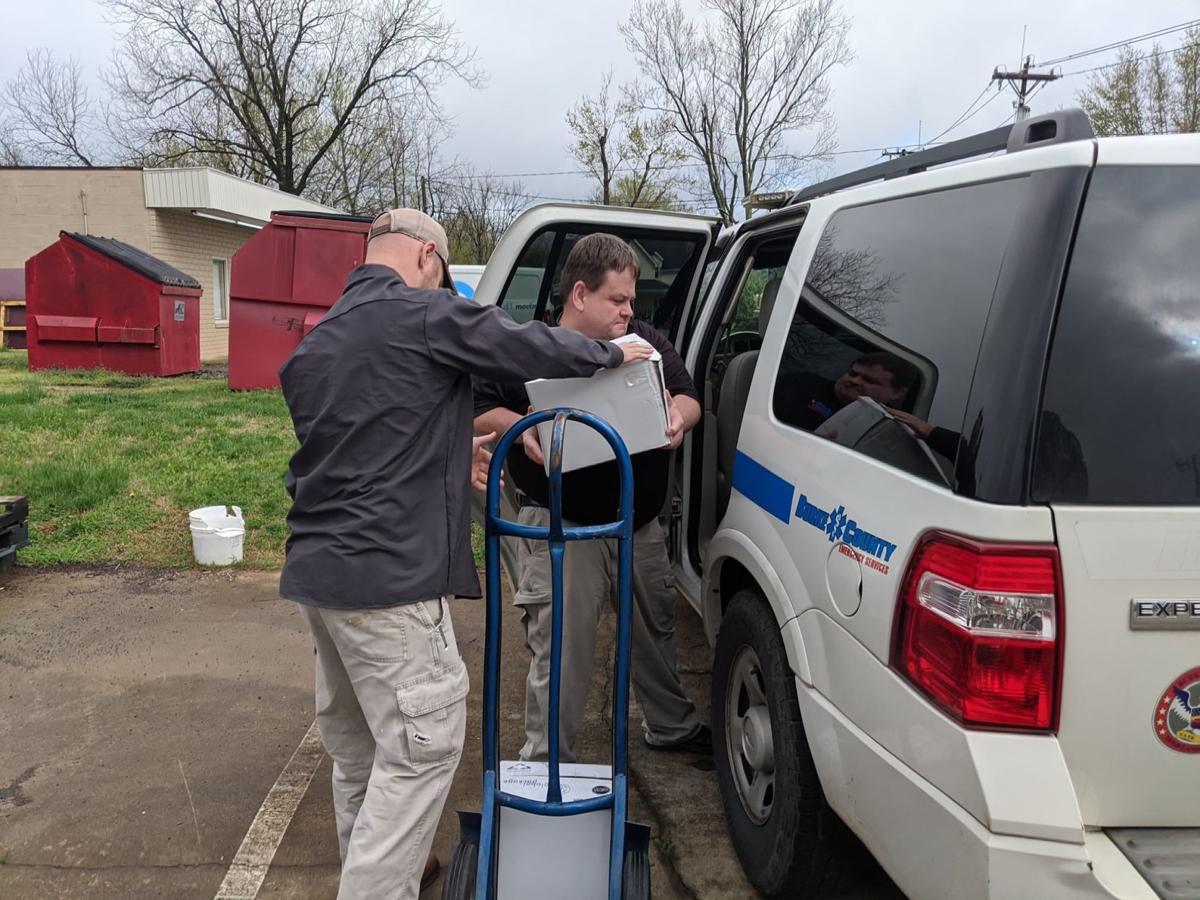 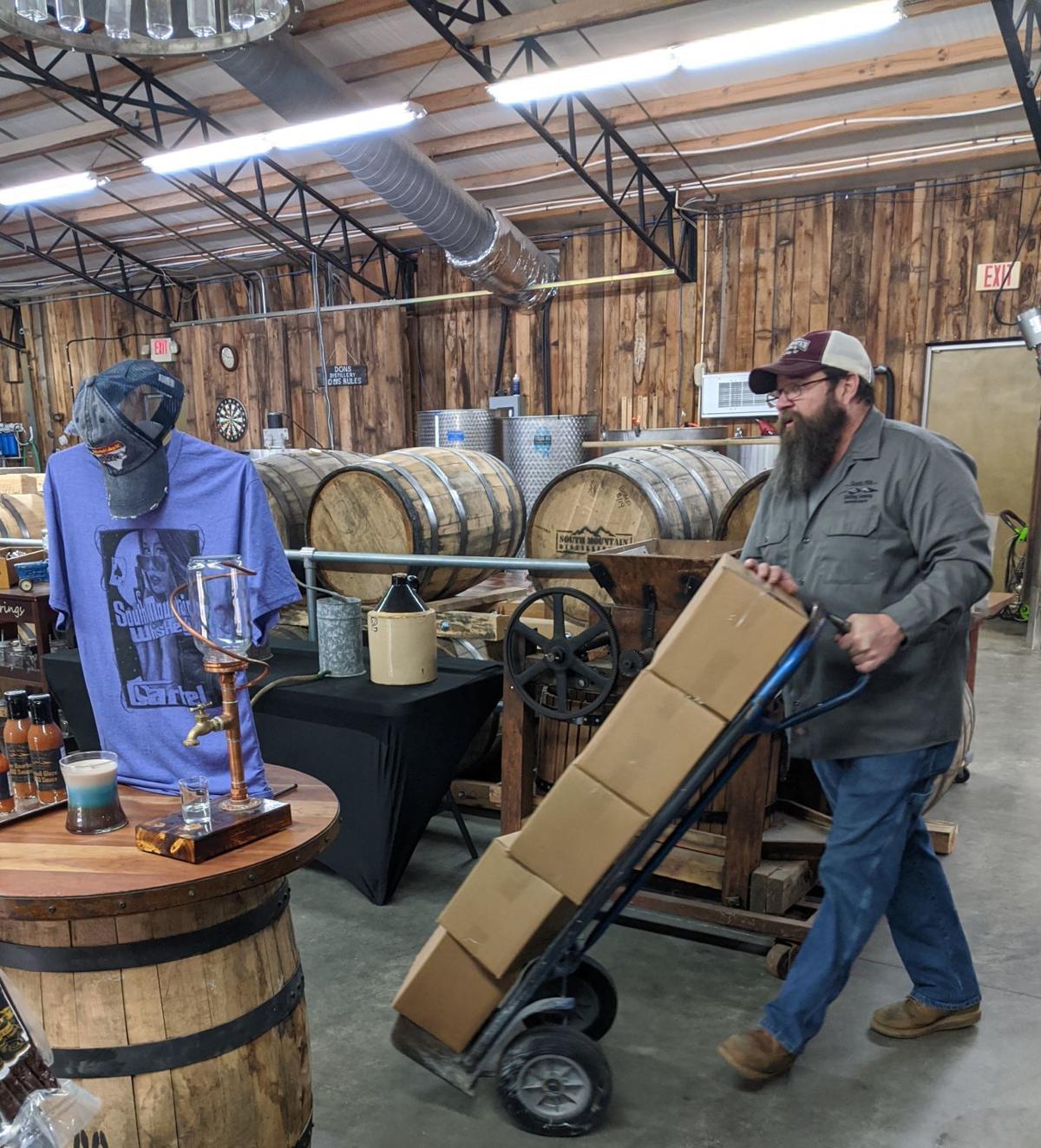 Owner Don Smith wheels a hand truck full of boxes of hand sanitizer through his distillery.

RUTHERFORD COLLEGE — Don Smith knew how he wanted to help with coronavirus pandemic relief, he just didn’t know if he’d get to.

But then late last week, he and other distillers across the country got the go-ahead.

“I wanted to do it prior to them releasing the memorandum that allowed us to start making hand sanitizer,” said Smith, the owner of South Mountain Distilling Company in Rutherford College. “A lot of distilleries jumped on the bandwagon and were just providing alcohol to places. I didn’t necessarily feel that was the right thing to do because someone could accidentally consume it and possibly get sick or something.

“I was holding out, then last Thursday, the (Alcohol and Tobacco Tax and Trade Bureau) sent out that email saying they were allowing distillers to start making hand sanitizers within guidelines. That was like a burden lifted off of me because I wanted to help and didn’t know how to do it in a good way. I jumped on the bandwagon and got my ingredients that needed to be in there — hydrogen peroxide’s one of them, then some glycerin. They gave us a recipe, and we went straight as soon as we got the ingredients and went into production.”

On Wednesday morning, that culminated with South Mountain’s donation of the newly made hand sanitizer to local law enforcement and emergency services departments. Chief Jack Moss accepted on behalf of the Valdese Police Department, Maj. Jason Black on behalf of Burke County EMS, and Capt. Scott Rogers for the Burke County Sheriff’s Department.

“Right now in Valdese, we have hand sanitizer, but we know it’s running low everywhere,” Moss said. “Frontline people like police officers and EMS are going to be in dire need of this very soon.

“With South Mountain Distillery, and especially with Donnie, he’s been a friend of the community for a long period of time. He’s always stepping up to the plate and giving us what we need. He stays in contact with the police department and tells me what he has and what he’s making. He’s helping his community stay safe, and I think that’s what this gesture’s all about.”

Black said the hand sanitizer will give EMS a little more peace of mind and one less thing to worry about tracking down for now when so many needed materials and equipment are running scarce.

“It’s a critical need,” he said. “We have some on order through several different companies, but they’re all out of stock. On our trucks, we’ve got a very limited supply. We’re trying to spread it out amongst trucks. This really helps. We’ll put this to good use, and it makes my job a little bit easier after trying to hunt gowns and masks and other equipment that, a month ago, we had plenty of, but now that we start using them, they go quickly.

“It’s nice to be able to check that box off.”

Smith said the fact that BCSO reached out to him sealed the deal on him wanting to help in this way.

“I’ve got a new still being built, and the guy who’s building the still called me up and said, ‘I’ve got the sheriff’s department here,’ and I was like, ‘Oh no, my new still’s going to be confiscated.’ But they were looking for hand sanitizer, and he told them to get in touch with me,” Smith said.

“That’s what really started the whole process. I wanted to, and they contacted me, reinforcing it. It made it hit home, what was going on and the urgency for it. Now that there’s two cases in Burke County, I’m ready to ramp it up and help fight this thing as best we can.”

Smith said he wants to next supply his hand sanitizer to the local hospital, which is sending a 30-gallon drum to be filled. He’s fielded calls from the U.S. Postal Service in Greensboro and Charlotte, as well, but he has a list of local medical providers and emergency services personnel he wants to get to first, then he wants to offer the product to the public, if possible.

“I would love to be able to provide it to the public at this time, but I can’t. I’ve got to get these other emergency services personnel and fire departments taken care of in the beginning, give them some supply and get them stocked with a little something. Then, maintain during this crisis. Hopefully we’ll be able to get the public in there because I’ve heard some sad stories of people with medical conditions and such.

“With what I looked at last night, there’s’ just a handful of distilleries in North Carolina doing this. But if everybody pitched in, it could help relieve some of people’s fear because they’re accustomed to having something. And when they don’t have it, it kind of puts them in a panic mode, like the toilet paper. This can help ease somebody’s mind a little bit. Put them a little at ease in a serious time.”

He’s asking folks who want to help to donate containers for the hand sanitizer or money to help cover the cost of ingredients.

“We’re going to keep donating, but we’re going to have to recoup some material cost at some point. We’re asking for donations for some of this. But we’re not really trying to make a profit off of it.

“The profit is getting this under control.”

What you should ask if retirement is just around the corner

What you should ask if retirement is just around the corner

The most important things about building credit

The most important things about building credit

Sign up now to get the most recent coronavirus headlines and other important local and national news sent to your email inbox daily.

Is It Safer to Pull Your Money Out of the Stock Market Now?

With a long-term focus and a decent cash buffer, you may not have to.

Black Friday is rapidly morphing into “Hallothanksmas.” Still, some people like to shop on the day itself. Here are the details on store hours during Black Friday 2021.

What would happen if you invested $100 a month in the stock market?

You might be surprised to learn you could turn $100 per month into six figures over time.

How to be a savvy shopper amid Cyber Monday hype

Besides recognizing FOMO, here are other ways to be a savvy shopper on Cyber Monday, which is the Monday after Thanksgiving. Also, check out more of the week's best money tips from experts.

NEW YORK (AP) — Stocks sank Friday, with the Dow Jones Industrial Average briefly falling more than 1,000 points, as a new coronavirus variant first detected in South Africa appeared to be spreading across the globe. Investors were uncertain whether the variant could potentially reverse months of progress at getting the COVID-19 pandemic under control.

Black Friday preview: How to get the best deals at major retailers

Here's a closer look at how major retailers like Best Buy, Walmart and others are handling Black Friday this year.

As is usually the case, the decision requires looking at both options through a case-by-case lens.

Cyber Monday sales are spread over three days at Amazon.

10 Easy Ways to Save Money on Holiday Decorations This Year

Host Teri Barr talks with Lexi Pelchen, Home Finance Expert with Forbes Advisor/Forbes Home, to learn about the easy ways to save money on your holiday decorations. DIY? Trade? Forage? So many great ideas to help you keep more cash in your pockets this year. And a bonus tip, too! How to save money by planning ahead for 2022.  See omnystudio.com/listener for privacy information.

Owner Don Smith wheels a hand truck full of boxes of hand sanitizer through his distillery.